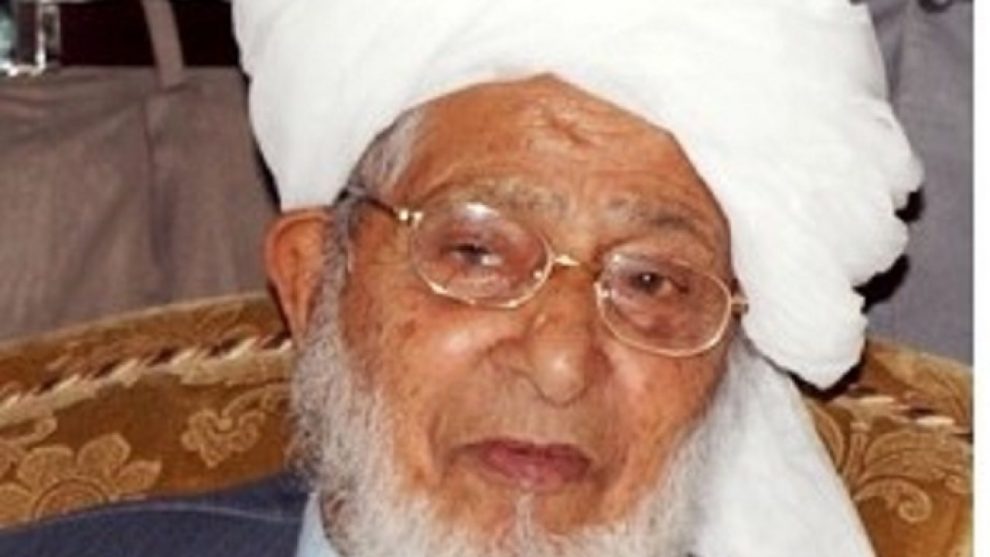 A Darvesh holds the reins of time like steed,
sun, stars and moon to book with speed.
Zarb e Kaleem
Mian Bashir Ahmed Larvi (November 1923- 14 August 2021) whose role in the society was multifold passed away  in wangath, in Ganderbal District of Kashmir. He was continuing the legacy of Mian Abdullah Abad his grandfather and his father Mian Nizamuddin, who had migrated from the Hazara area of Pakistan in 19th century. He belonged to Naqshbandi order of Sufi tradition, worked as politician, spiritual leader, Legislator and ambassador of peace. He was awarded Padma Bhushan, third highest civilian award by the Government of India for his services toward society.
Background of migration.
In the book Matah-e – Faqar- o- Daanish,which is an official account of the Shrine of Laar, it is mentioned that the Spiritual master of Main Abdullah Abad asked him to migrate to wangath, which was covered with forest and very rare demographic presence, to perform his duty of spiritual guidance to those who had thirst for experiencing truth. Because Mian Abdullah Abad himself was from Tribal community he chosen to serve the downtrodden and socially alienated people of Gujjar-Bakerwal tribe. The issues of them were very.
The presence of this tribe in the hills and on less productive areas made them socially alienated and economically less fortunate in the society. Moreover the transhumance, Nomadism and pastrolism created serious challenges and issues which were never addressed by the state of that time. . It is in this background that the full fledged intervention was made in the society by Mian Sahib to fight against the social evils, state’s exploitation and political inefficiencies by providing leadership and creating ‘political consciousness’ among pastrolist Nomads. Through political assertions, many challenges were addressed. Mian Bashir Ahmed resigned from Farooq Abdullah’s Cabinet for not providing special attention to the conditions of the tribe. It shows his commitment for the cause of his tribe and his priorities.
Visits, Langar, and Urs. .
Mian  Abdullah Abad first time visited  Poonch-Rajouri area in 1898 for collecting a handwritten copy of Qur’an by Aurangzeb. He successfully collected it along with a copy of an Egyptian Emperor. In his second visit, the  merimonial relations were established with Ghulam Hussain Lasanvi. These two families along with some other prominent people established the socio-political forum of Gujjar Jat conference, which fought the injustices of Dogra rule.
Some 100 Kanal of land was given by Choudhary Buland khan, who was maternal uncle of Gulam Hussain Lasanvi in Mohra village. Here a Masjid and a langar was established. It was an important place of Social gathering because Mian Abdullah Abad used to spent 5 months here, as the connection with Kashmir valley would lost because of snowfall. Here the social gatherings were organised. Along with Ibadaat, zikr, and Murakba, people were learning the cores of Islamic teaching. It can be argued that in initial stages, focus was given on Sufism in general and  Islamic teachings in particular.
During Urs, special focus was given on the understanding and practices of Islam. Usage of Gojri language was there to translate Salat into Gojri. In this way the gojri language flourished. A special tradition of “Siharfi” emerged. Most of the Ash’aar has lament as the main theme, which reflects the challenges and problems faced by the tribe.
Abdullah Abad wrote in Punjabi but breakthrough happened when Mian Nizamuddin encouraged people to write in Gojri.One of the books of Mian Nizamuddin is “Asraar-e-Kabiri” which is in five languages namely, Arabic, Persian, Punjabi, Urdu and Hindi. It shows the rich literary taste and love for multiple languages
Poets like Khuda Baksh Zaar, Sain Faqar Din, Sain Kader Baksh, Asrar Asar, Zabhi Rajourvi, Barkat Shah and many more wrote and participated in the literary Mehfils of Laar. Later on Mian Bashir Ahmed Larvi himself compiled the Siharfi “Neer Samundar”. In this book poetry of prominent poets of Gojri was published. It can be argued that Gojri language was institutionalised by Mian Bashir.
Struggle, Consciousness and legacy.
The injustice of the Dogra state on the tribe in the form of taxes and punishment were the reasons that had awaken  Mian Nizamuddin. He founded the Gujjar-Jat conference to provide a platform from where the voice of the downtrodden tribe can be raised in a united form. This lagacy was forwarded by Mian Bashir. He fought for getting the Schedule Tribe status of Gujjar-Bakarwal tribe and was successful in doing so. Now the level of consciousness is much high in tribe. It can be hoped that the legacy will be forwarded by the successors along with  educated and economically well off section by establishing Educational institutions, sponsoring students in foreign universities and providing counselling and information.
Wangat is not only a place of spiritual gathering. It has potentials to play its role on the multiple levels for those who are less exposed to education, social change and economic stability.
Refrences
1.Zarb e Kaleem.
2 Matah-e-Faqr-Daanish.
3 Wikipedia
The Dispatch is present across a number of social media platforms. Subscribe to our YouTube channel for exciting videos; join us on Facebook, Intagram and Twitter for quick updates and discussions. We are also available on the Telegram. Follow us on Pinterest for thousands of pictures and graphics. We care to respond to text messages on WhatsApp at 8082480136 [No calls accepted]. To contribute an article or pitch a story idea, write to us at [email protected] |Click to know more about The Dispatch, our standards and policies

‘Could not defend a nation whose leaders gave up and fled’: Joe Biden defends US pullout from Afghanistan
We trust our capability in safeguarding Indian borders, says DG BSF; 77 new COVId cases in J&K and more top news stories
Comment