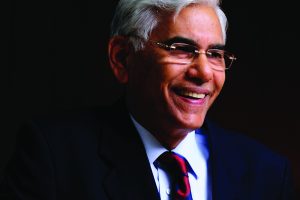 “Not Just a Nightwatchman”: This book details Vinod Rai’s innings in the BCCI