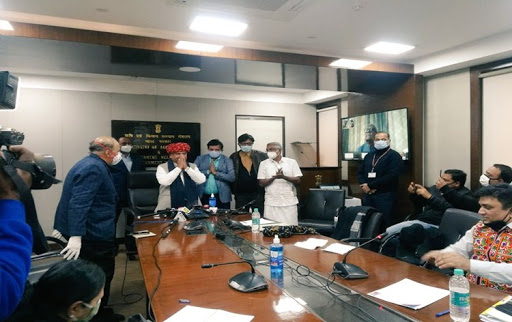 Confederation of NGOs of Rural India’s delegation handed over the memorandum containing more than 3 lakh 13 thousand signatures of farmers to Mr Tomar in New Delhi yesterday.

Speaking on the occasion, Mr Tomar said there is enthusiasm among the farmers across the nation with respect to the new agri-laws.
He said, these reforms were long overdue. Mr Tomar said, because of Prime Minister Narendra  Modi’s determination that the necessary reforms can be seen taking shape on the ground.

He said that empowering the rural agrarian economy is government’s duty and will continue to remain so in future.

The minister said there are several important agri-reform works that have been done over the past six years and the scholars who are working in agriculture sector have always recommended such reforms.

He said, the aim of these reforms is to raise farmers income, to provide them an independent market, to attract younger generation towards agriculture and to increase the contribution of agriculture in the country’s GDP.