She won the ‘Best Fighter Woman’ title after she clinched gold in an International Thang-Ta Championship at Imphal in Manipur in November 2018 and bagged another gold medal at World Invitational Championship held in Philippines in April this year. 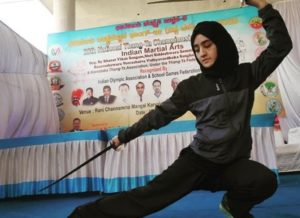 Daughter of a former athlete, Fiza Nazir of Fateh Kadal neighbourhood in Downtown, Sriangar started her sports journey at the age of nine.

“When I was in my second or third grade, my father (Nazir Ahmad) an athlete, who was associated with football and weight lifting for years, told me, ‘if I had a son, he would have pursued my dream of becoming a champion’,” says Fiza.

This became a challenge for Fiza and her younger sister. In coming years, Fiza prepared herself for martial arts. Beating all odds, Fiza over the years has made her mark in the Thang-Ta sport.

Now, Fiza’s father doesn’t desire a son. He is proud of his daughter’s achievements. “She broke the stereotype. No more, I dream of having a son. My daughters are equal to boys in all respects,” says Nazir.

Fiza, on the other hand, is equally proud of her father, who despite odds and societal pressure provided all possible facilities and support to her daughter.

“Besides my father, the whole family has been very supportive throughout my journey. Sportsmanship has been running in my blood,” says Fiza.

She has played and won against countries like China, Bhutan, Philippines etc. The last one she played against South Korea.

“Thang-Ta is a highly satisfying game. I’m playing for myself,” says Fiza.

However, she gives the credit of her achievements to her coach, Aijaz Ahmad Bhat, who is associated with the sport for the last 20 years.

She says it wouldn’t have been possible for her to win these awards without his guidance. “Winning or losing is the part of the sports, but giving moral support to a player pushes him/her for success,” she says.

So is the dedication of Fiza towards the game that she dropped her academic year.

“It was difficult to do practice and studies simultaneously, so I decided to keep my studies on hold for a year. But now I am preparing for the NEET,” says Fiza.

“One thing I love in sports is discipline. Your brain dumps everything, once you are in the game,” she adds.

“I live in the downtown and during turmoil it becomes difficult for me to go outside, but I always make it a point not to miss my practice classes,” says Fiza.

Despite performing well in her field, Fiza Nazir argues that there is no monetary support from the State Sports Council for the players. “Every time ministers and other government officials came to watch sports programs, they announced a long list of facilities and benefits for the players. But later none was delivered,” she says.

The sports sector in Kashmir lacks many facilities. She demanded that it is the time for authorities to address players’ demands and boost the field of sports in Kashmir. “I haven’t received any kind of help from the federation or any other authority so far,” she expressed with disappointment.