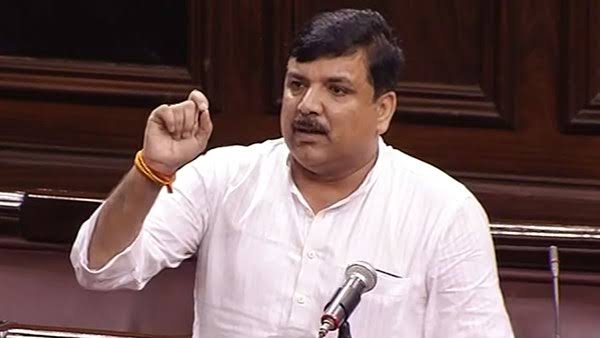 AAP MP Sanjay Singh on Monday said that the Municipal Corporation of Delhi (MCD) is the body responsible for ensuring that no illegal factories operate out of buildings.
“It is really unfortunate that BJP does not refrain from doing politics over dead bodies. The MCD is responsible for the construction of the five-story building. If any illegal factory is functioning in that house then again it is the responsibility of the MCD. This factory has been there for the last 10 years. There was no ventilation system in that factory,” Speaking on Citizenship (Amendment) Bill, Singh said: “Citizenship (Amendment) Bill is against the spirit of the constitution. This bill will end democracy in this country. AAP will oppose this bill. There are protests going on in Assam as well as in the North-East.”
The locals protested today at Anaj Mandi where a fire claimed 43 lives.
Around 62 people were rescued from the building by fire tenders. 34 dead were confirmed by the Lok Nayak Hospital and 9 by the Lady Hardinge Hospital, police said.
Delhi Chief Minister Arvind Kejriwal has announced a compensation of Rs 10 lakh to families of those who lost their lives in the tragic incident. Additional assistance of Rs 1 lakh had also been announced for those injured.
The Delhi government has also ordered a magisterial inquiry into the incident and sought a report within seven days.