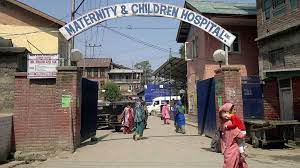 ANANTNAG: The lone maternity and child care hospital in south Kashmir was established before decades ago and yet there is no allotted Medical Superintendent, something that is taking a serious toll on the functioning of the hospital.

In absence of the full-fledged medical superintendent, officials working in the hospital have to wait for the decision of higher ups even for minor things.

Officials told that the in-charge medical superintendent, who is basically a medical officer has to send in writing to Principal GMC Srinagar or other higher ups for even spending one rupee.

“The in-charge medical superintendent who works knows the ground situation very well but when he has no powers how can he take any step for the betterment of the hospital,” they said.

He said that the hospital is facing a space crunch besides the staff working in unsafe buildings and in such conditions a hospital which has no officer with certain administrative powers is quite annoying.

He further said that acting MS has no TA/DA and if any guest visits there, he has to spend from his pocket for tea or other things of the guest.

It is pertinent to mention here that MCCH Anantnag is a lone maternity hospital that caters four southern districts besides patients from Chenab valley.

He added that the government has decided to shift MCCH to main GMC hospital in Janglat mandi Anantnag where construction work on Block B is going on and in two floors of the building both the pediatrics and maternity section will function.

He said that once the facility will be shifted, the medical superintendent for MCCH will be sanctioned—(KNO)