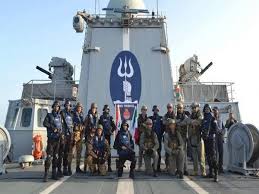 Amid the ongoing stand-off between India and China, the Marine Commandos (MARCOS) of the Indian Navy have been deployed in the Pangong lake area in eastern Ladakh.
The idea behind the deployment of the MARCOS in Eastern Ladakh where Indian Air Force’s Garud operatives and Indian Army’s Para Special Forces, which have been there since day one of the conflicts, is to enhance the integration of the three services and provide the naval commandos exposure to extreme cold weather conditions.”The MARCOS have been deployed in the Pangong lake area where the Indian and Chinese forces have been engaged in a conflict situation since April-May timeframe this year,” the sources said.
The Navy commandos are also soon going to get new boats for operations in the lake are along with the existing infrastructure for operations in the lake, they said.