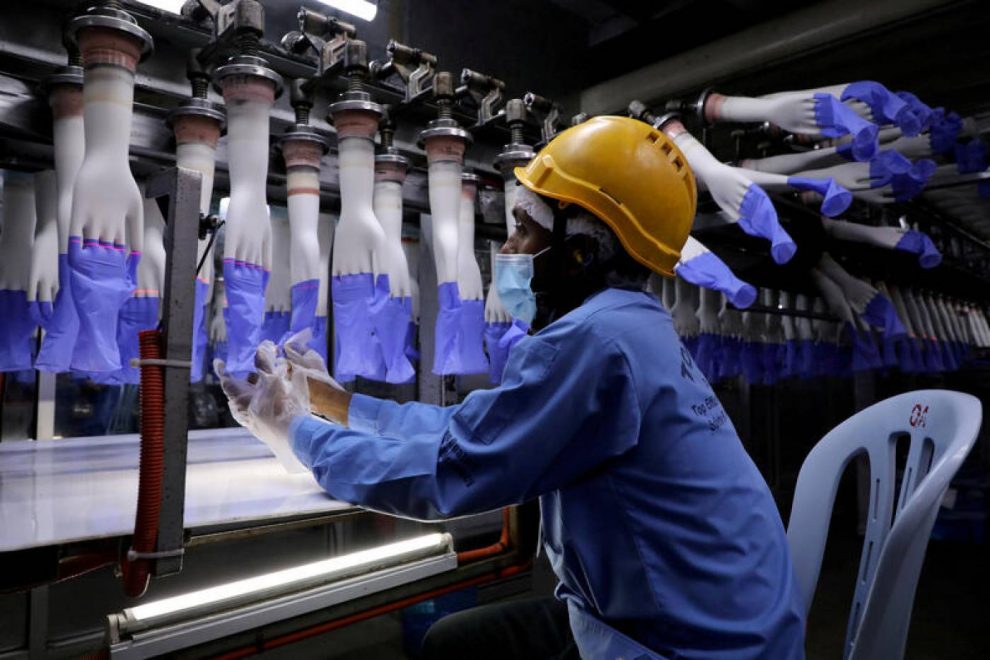 KUALA LUMPUR: Malaysia said it would close down some factories of Top Glove Corp for COVID-19 screening and quarantine after more than 2,000 workers in the world’s biggest rubber glove maker tested positive for the disease.

Top Glove’s shares were down as much as 7.5% by late morning after the government said 28 factory buildings will be shut in phases, although it did not provide a timetable.

The company, which commands a quarter of the global latex glove market, has racked up record profits this year on sky-rocketing demand for its products and protective gear, thanks to the pandemic. Despite Tuesday’s slump, its shares have surged over four fold this year.

Malaysia itself makes just under two thirds of the world’s rubber gloves, according to the Malaysian Rubber Glove Manufacturers Association. Hartalega Holdings and Supermax Corp are the other two top glovemakers in the country.

Malaysia’s Health Ministry reported a sharp rise in cases in the area where Top Glove factories and dormitories are located, with 2,453 workers testing positive for the virus, out of 5,767 screened.

Top Glove runs 47 factories across Malaysia, Thailand, China and Vietnam, with 36 of them producing gloves. Europe and North America are its biggest markets.

In a stock exchange filing on Monday, Top Glove said it had temporarily stopped production at 16 of the 28 facilities since last Wednesday, with the balance of 12 facilities operating at much reduced capacities.

The company did not immediately respond to an email from Reuters seeking details, including the impact on production.

MIDF Research analyst Ng Bei Shan said in a note that the closures will reduce production capacity by 50%, adding that a two-weeks closure could hurt net income by 4% in fiscal 2021 if average selling prices remain the same.

However, tightened supply may also boost prices, cushioning the impact, she said. Ng said the closures had not yet affected the company’s orders and that she was maintaining her earnings estimates for fiscal 2021.

“The development of the temporary closure of its facilities in stages is still fluid. As such, the actual impact to Top Glove’s full-year earnings may be hard to ascertain at this point,” she said.

Last week, the government ordered 14-day curbs through Nov. 30 in parts of a district about 40 kms (24.8 miles) west of the capital Kuala Lumpur, where Top Glove factories and dormitories are located.