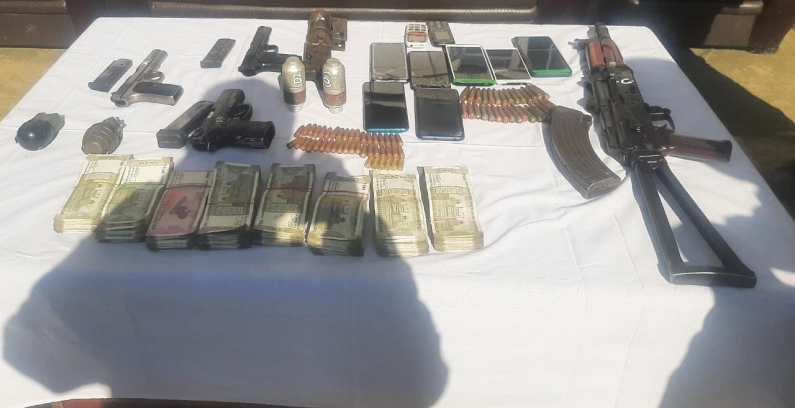 Addressing a press conference at Rafiabad here, Deputy Inspector General (DIG) North Kashmir Udaya Bhaskar who was flanked by SSP Sopore and security officials said that the module was planning to attack in coming days.

The DIG said that in two different operations four militants and three Over Ground Workers (OGWs) were arrested in a joint operation by Army, Police, and CRPF.

He said that a huge quantity of warlike stores have been recovered from their possession and the operation was launched on specific information. “First three arrests were made and on their sustainable interrogation, more arrests were made by the joint team of security forces in two operations,” the DIG said.

The DIG also said that so far during the investigation, it was been revealed that they were in touch with a Pakistan—based handler Yusuf Balochi aka Khursheed Ahmad a resident of South Kashmir’s Anantnag who is presently living in Pakistan.

About their plans, the police officer said that the group was planning to carry out an attack on the security forces in the coming days, and with their timely arrest a major attack has been averted. He said that apart from warlike stores, cash of three lakh and eighty thousand has been recovered from their profession.

Regarding the militancy—related situation in north Kashmir, he said that so far the situation is good and under control.

On more arrests in this specific case, he said that right now security forces are working on it and this was what they want to say at present—(KNO)

Our aim is to wean away youngsters from addiction and bring them into mainstream of society: LG Sinha
DPR for J&K metrolite project likely to get central nod on February 17
Comment