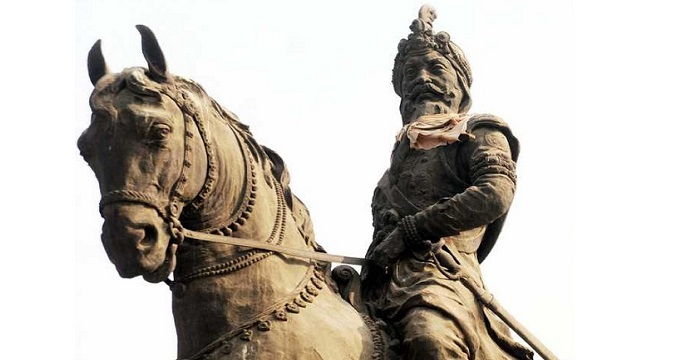 The modern Jammu region was divided into several principalities during the medieval period. Most of these principalities were ruled by the kings of the Rajput dynasties. The Dev dynasty of the Jammu state was the most powerful ruling dynasty of the Jammu hills. Frequently, the rulers of the Dev dynasty tried to extend their sovereignty in the other hill states of Jammu. However, Raja Ranjit Dev of the 18th century Jammu succeeded in the establishment of his sovereignty in large parts of Jammu hills. He established political stability in the hills and accelerated the socio-economic development in the hills. But after his death in 1784-85 political stability of Jammu state started to diminish. There was a war of succession between two his two sons, Brijraj Dev and Dalel Singh. The 18th century was the period of the political crisis in India. The Mughal Empire was crumbling. Foreign invasions of Nadir Shah of Iran and Ahmad Shah Abdali of Afghanistan had weakened north India in both the political and economic terms. Moreover, for some region powers, the decline of the Mughal empire brought a new political dimension for the formation of independent states.

In the Punjab region, the Sikh Misls became very active for territorial achievements. Some of these Misls decided to establish their rule in Jammu. But it was the Sukarchakia Misl, headed by Maharaja Ranjit Singh which succeeded in the establishment of its rule in Jammu. Maharaja Ranjit Singh succeeded his father Mahan Singh in 1800-01. He planned to found a big kingdom in the north-west frontier of India. The areas of Jammu and Kashmir were also put on the map of his political boundary. As far as the Jammu hill states were concerned, they lacked political confederation in terms of their security against the external invasion. Jit Dev, the ruler of Jammu state, was unable to assert his authority on the different politically aspired officers of his own state. Consequently, Maharaja Ranjit Singh decided to take advantage of the political weakness of Jammu. In 1800-01, he attacked Jammu and compelled Raja Jit Dev to accept his sovereignty and pay an annual tribute. It seems that till 1816 Maharaja Ranjit Singh kept Jammu as a tributary of the Lahore Darbar. But after that, he planned the annexation of Jammu and other hill states to Lahore Darbar.

When Maharaja Ranjit Singh did not succeed to maintain law and order in Jammu because of the opposition of the local people led by Mian Dido, he decided to accomplish his works appointing Gulab Singh as the commander of an army for the Jammu hills. Since Gulab Singh belonged to one of the royal families of Jammu, he understood it his prime duty to work in his native region. Gulab Singh not only suppressed the popular uprising to Mian Dido in Jammu state, but he also played an instrumental role in the establishment to the sovereignty of Maharaja Ranjit Singh in Kishtwar and Rajouri states. With short time Gulab Singh made whole modern Jammu region as an integral part of the Lahore Darbar. First time Jammu hill states lost their local political identities and started to be governed in accordance with the direction of the Lahore Darbar. It was a unique achievement of Maharaja Ranjit Singh that Jammu hill states, being strategically very important, started to serve the interest of the Lahore Darbar under the command of Gulab Singh. It is important to mention that many of the Jammu hill states had accepted the sovereignty of the Mughals from the sixteenth century onwards, but they were never forced to surrender their political identity by the Mughals. The Rajput rulers of Jammu acted as political partners of the Mughals in the hills and other parts of the empire. As long as the Mughal and Rajput coalition existed the political identities of Jammu hill states were never disturbed.

Maharaja Ranjit Singh with the support of three Jammu brothers, Gulab Singh, Dhian Singh and Suchet Singh, succeeded in establishing his rule in the Jammu hill states. These states not only served the interest of the Maharaja in terms of large territorial gain, but more importantly, these states provided expert soldiers and revenues to the Maharaja. Strategically, conquests of Jammu hill states proved to be instrumental in the success of the Maharaja for the retention of his rule in Kashmir. It is important to mention that the failure of the army of Lahore Darbar against the popular uprising of Mian Dido, before the appointment of Gulab Singh for the management of Jammu, had realised Maharaja Ranjit Singh that Jammu hill states annexation to the Lahore Darbar through native commanders could be long-lasting. Consequently, he made Gulab Singh and his Suchet Singh, the younger brother of Gulab Singh, also considerably favoured by Maharaja Ranjit Singh. The latter was provided an opportunity by the Maharaja to lead the important military expedition and emerged as one of the most competent army commanders of the Lahore Darbar. He received Wazirabad in jagir. Similarly, Hira Singh was treated as one of the most favourite courtiers by the Maharaja.

Brothers as controllers of the hill states.

What Are the Legalities of an Intercontinental Marriage?
Making a Latina Think About You