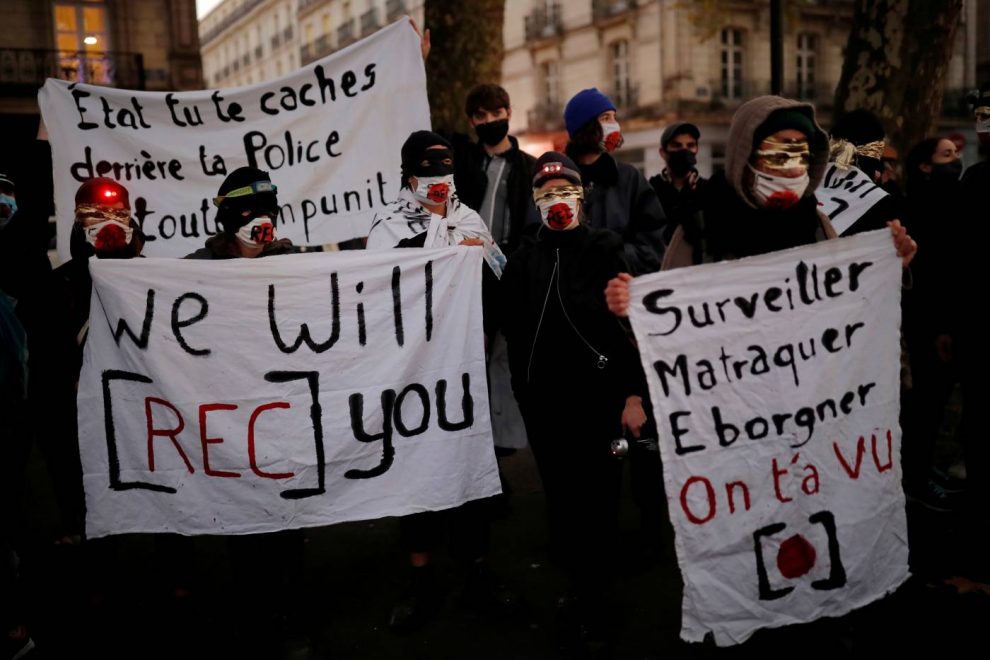 PARIS: President Emmanuel Macron said on Friday that images showing Paris police beating up a Black music producer were shameful for France, and that government would have to find a way to restore public confidence in the force.

Prosecutors are investigating the violent arrest of Michel Zecler, who said he was also racially abused by the officers, after CCTV footage of the incident was released. The police watchdog is also investigating.

Four police officers were being held for questioning as part of the investigation, the Paris Prosecutor’s office said.

The beating inside the entrance of a building was captured on closed circuit television and mobile phone footage, which has circulated widely online and has made headlines around Europe.

“The images we have all seen of the aggression against Michel Zecler are unacceptable, they are shameful for all of us. France should never allow violence or brutality, no matter who it comes from. France should never let hate or racism prosper,” Macron said in a statement on his Facebook page.

He added that the police force should be exemplary. “Those whose job it is to apply the law should respect the law,” he said, adding that he has asked the government to urgently make proposals about how to restore confidence in the police.

The beating of Zecler risks inflaming racial tension, with allegations of repeated police brutality against Black and ethnic communities at the forefront of many people’s minds after the death of Black American George Floyd in Minneapolis in May sparked the “BlackLivesMatter” movement.

Dominique Sopo, President of anti-racism group “SOS Racisme”, told Reuters Zecler had been the target of a “racist attack”.

“For police officers to act that way they must have a tremendous feeling of impunity. This situation is a symptom of an impunity that has been going on for too long,” he added.

Paris police already faced criticism this week after social media photos and videos showed officers hitting protesters as they cleared out an illegal migrants campsite in a central Paris square.

The music producer told reporters he was set upon by police at his studio in Paris’s 17th arrondissement on Saturday.

He said he had been walking in the street without a face mask – against French COVID-19 health protocols – and, upon seeing a police car, went into his nearby studio to avoid being fined. However, he said, the police followed him inside and began to assault and racially abuse him.

Interior Minister Gerald Darmanin told France 2 television on Thursday that the officers would be punished if the alleged wrongdoing was confirmed.

Zecler’s arrest came amid fierce debate in France over draft legislation that would limit journalists’ ability to document French police officers at work.

Around 3,500 people marched against the bill in the western city of Nantes, where police used tear gas and made several arrests. Many in the march also protested against police violence, some with their faces bandaged in support of Michel Zecler. A similar demonstration is planned in Paris on Saturday.

“BlackLivesMatter” protests broke out in Paris in June following the killing of George Floyd, who died after a white police officer knelt on his neck in the course of arresting him.

The outrage generated by Floyd’s death has resonated in France, in particular in deprived city suburbs where police often clash with youths from ethnic minority backgrounds.

The protests in Paris in June focused on unsolved cases of people dying during police operations, such as Adama Traore, who died in police detention near Paris in 2016.

How green is your green investment? This app could tell you
Black Friday 99%-off sale sparks fears over garment workers’ pay in UK
Comment