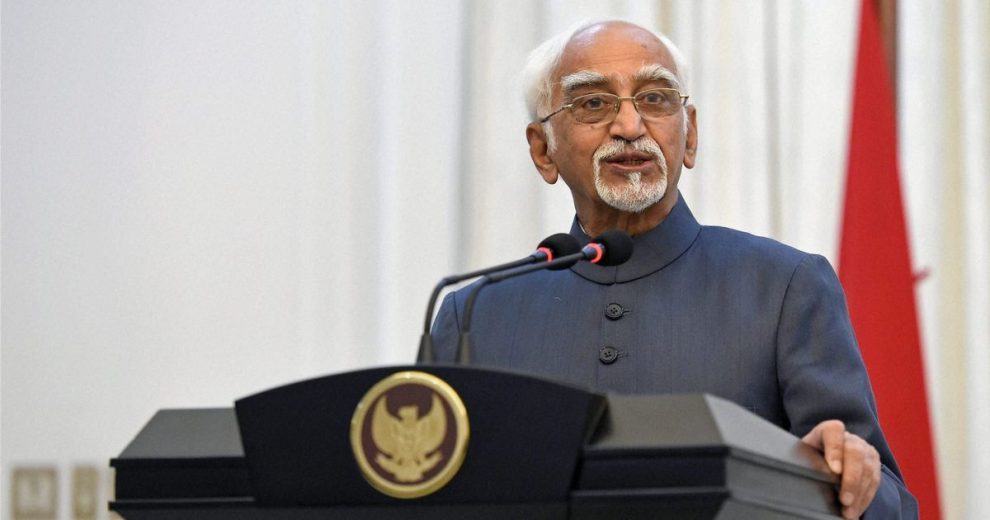 Vice President Bhairon Singh Shekhawat was completing his term of office and around early July 2007, there was speculation in the media about his likely successor. My name was mentioned amongst others. One afternoon, I got a call from Sitaram Yechury of the Communist Party of India (Marxist) (CPI [M]) enquiring—in strict confidence—if I would be amenable to the idea. A few days later, while I was waiting for a friend at the India International Centre, a call came from the PMO. It was Dr Manmohan Singh. He said that he was with Sonia Gandhi and they sought my acceptance of the suggestion that I be the candidate of the UPA in the forthcoming Vice Presidential election. My response was in the affirmative and I thanked them for the offer and the honour. The media reports of 21 July suggested that the Left’s initiative became the unanimous choice of the UPA ‘after [the] CPM assuaged doubts about his ability to conduct Rajya Sabha proceedings’. My nomination paper, which was signed by all UPA leaders and their MPs, was filed on 23 July but not without a last-minute hitch when around lunch time, it was discovered that the Election Commission desk accepting nominations required a certified copy of the electoral roll of the constituency where my name figured. A colleague in the Minorities Commission saved the day by rushing to the office in East Delhi, obtaining the document, and getting it to me minutes before the deadline of 3 p.m.!

After the nomination and prior to the election, a report in The Telegraph called me ‘a Calcutta boy’. A longer piece by Swapan Dasgupta in The Pioneer bore the caption ‘Ansari is left but still right’; it was critical of my interview to Outlook, wherein I criticized the US invasion of Iraq and India’s vote in the IAEA against Iran’s nuclear programme, adding that ‘per se there is nothing extraordinary or undignified in Ansari’s position. His criticism of the US matches the liberal critique of the Bush Administration and his position on Iran is shared by a large number of Indians, including many in the BJP. Moreover, Ansari has every right to hold these views. What I find somewhat disconcerting is that Ansari chose to air these views after he was named as UPA’s candidate for Vice President’; also that ‘he must take exceptional care to not be compartmentalized as a Muslim Vice President, he must see himself as India’s Vice President’. Some in the Congress party also felt that the Outlook interview was untimely. The parameters of political correctness were being carefully defined!

Given my limited familiarity with names and faces in New Delhi’s political world, it was suggested by my political minders that I should call upon the leaders and be available to all voters of the UPA at a conveniently accessible place. Accordingly, I was told to shift to 11, South Avenue, which had been used a few days earlier by the successful presidential candidate, Pratibha Devisingh Patil and was considered auspicious! I said I would do so during working hours but go back to Mayur Vihar for the night. I was also told that an individual by the name of Gurdeep Singh Sappal would be available to help me identify the new faces. This became the beginning of a decade-long friendship that continues to this day.

The exposure to the political bigwigs was educative. Lalu Prasad Yadav linked me to my roots in Yusufpur, which he had visited some time back. Sharad Pawar enquired if I had ever fought an election; my answer was a candid ‘no’. Dr P.C. Alexander of the BJP, whom I had known from my protocol days, said, ‘You have my good wishes but not my vote.’ Others were curious and tentative about the ‘new face’ but fell in line with the decision of their leaders. The other two candidates in the fray were Najma Heptulla of the BJP, whom I knew well from my previous incarnations and Rasheed Masood of the Samajwadi Party (SP). On 10 August, the polling day, the result was a foregone conclusion: 96.46 per cent of the total of 790 voters cast their votes. I secured 60.52 per cent of the votes and Heptulla and Masood 29.5 and 9.97 per cent votes, respectively. The result was declared the same day by the Returning Officer, Dr Yogendra Narain, Secretary-General of the Rajya Sabha. The Gazette of India Notification was issued the next day.

I assumed the office of the Vice President of India the same day after I had expressed indifference, in response to a query, about the preferred ‘auspicious’ time for oath-taking. The Oath of Office, in terms of Article 69 of the Constitution, was administered by President Patil in the Ashoka Hall of Rashtrapati Bhavan.

It was an unconventional journey to the second-highest public office of the Republic. Many years later, a former member wrote a laudatory essay beginning with an Urdu couplet:

(Behold! Strange are the ways of politics. Those who did

not run the race were the first to reach the goal.)

Salma and I, accompanied by our children (Sulaiman, Nuriya and Osman) and nephew Rashid visited the Gandhi Samadhi at the Raj Ghat to pay our respects to the Father of the Nation.

An interesting observation on my election came from the US embassy in a cable of 10 August and made public by WikiLeaks. It said (perhaps referring to my views on US–Iran relations) that ‘we found Ansari to be…moderate in most but not all of his views’, and described me ‘as an intellectual with left-of-center leanings’. It added that ‘while at the United Nations, Ansari led the Indian delegation’s successful resistance to Pakistan’s two-year effort to gain a UN resolution on Kashmir favourable to Pakistan’.

Excerpted with permission from By Many a Happy Accident: Recollections of a Life, M. Hamid Ansari, Rupa Publications. Read more about the book here and buy it here.

The Dispatch is present across a number of social media platforms. Subscribe to our YouTube channel for exciting videos; join us on Facebook, Intagram and Twitter for quick updates and discussions. We are also available on the Telegram. Follow us on Pinterest for thousands of pictures and graphics. We care to respond to text messages on WhatsApp at 8082480136 [No calls accepted]. To contribute an article or pitch a story idea, write to us at [email protected] |Click to know more about The Dispatch, our standards and policies
TagsBy Many a Happy Accident: Recollections of a Life M. Hamid Ansari Memoir Rupa Publications