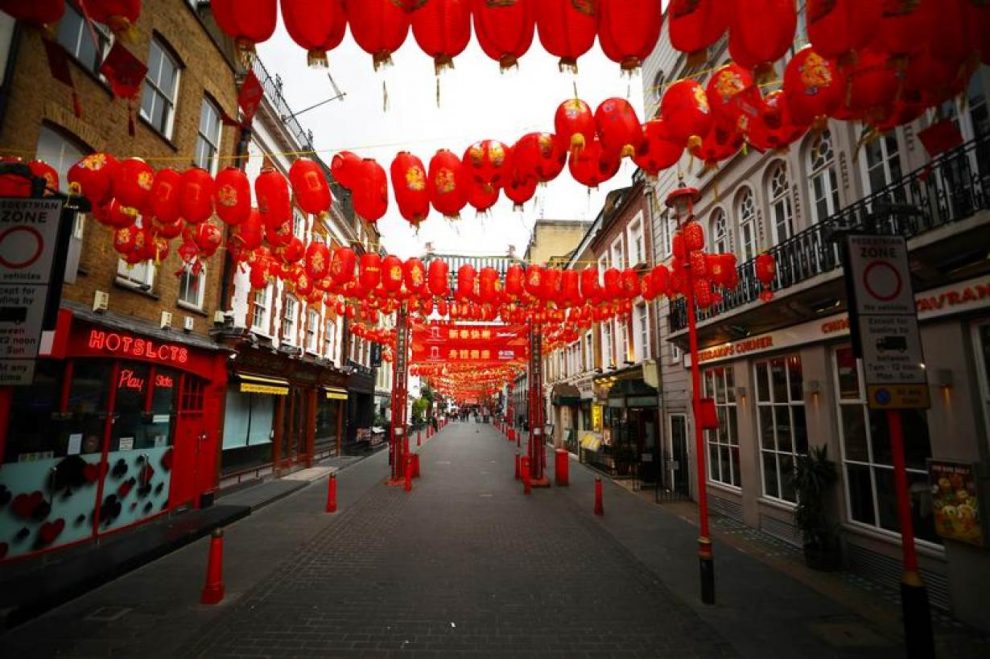 LONDON: It began with suspicious looks on the street. Then visits by shoppers and diners dwindled. Now, a year since the coronavirus spread globally, many small business owners in Chinatowns around the world are shutting up shop.

On the eve of Lunar New Year – traditionally her busiest trading season, Joanne Kwong is planning to close down Pearl River Mart’s flagship store in New York’s Chinatown half a century since it was established by her in-laws.

“The revenue isn’t matching all of the costs we have to pay for and that have been piling up over the last 13 months,” Kwong said.

From New York to London and Sydney, Chinatowns worldwide saw a dramatic drop in business as early as last January, before the coronavirus outbreak forced governments to impose lockdowns.

“It’s exhausting. I know that every one of those businesses, like us, is struggling. These changes are permanent. A lot of us are not going to make it and that’s terrifying,” Kwong told the Thomson Reuters Foundation.

She said, however, she was confident the well-known brand would be able to ride out the pandemic, mainly through sales from its expanded online shop and its sister stores.

Small and mid-sized businesses, the biggest employers, have been the hardest hit globally by fallout from the pandemic, with a fifth at risk of closing down permanently within months, said a 2020 study by the International Trade Centre.

But Chinatowns, in particular, have been hit harder and for longer, partly due to xenophobia related to the origins of COVID-19, which led to an avoidance of the area, said economist Paul Ong from the University of California, Los Angeles (UCLA).

Decades of outdated businesses practices, such as cash-only transactions and not having an online presence, as well as being less adept at securing state aid have contributed to merchants’ difficulties.

By analysing smartphone data, a study he co-authored found that Chinatown experienced an earlier and sharper drop in foot traffic than other areas in Los Angeles prior to lockdown.

“Other neighbourhoods have been better able to weather the storm, partly because the storms have been much more severe for Chinatown,” said Ong, an urban planner and the director of the Center for Neighborhood Knowledge.

When coronavirus started to spread from China to other countries a year ago, Kwong said she noticed a rise in xenophobia against Asians, and visits to New York’s Chinatown slowed right down.

Asians of various ethnicities have suffered a surge of physical attacks over the past year, particularly in the United States, which activists have linked to the pandemic’s emergence in China.

“You didn’t know if you were going to get attacked or harassed on the subway because you were wearing a mask,” said Kwong.

While the struggle to survive the impact of COVID-19 is not unique to Chinatown, there is a danger the cultural legacy of the enclaves could disappear, said Freya Aitken-Turff, head of China Exchange, a Chinese cultural body in London’s Chinatown.

“So little of the history and heritage of the area is formally documented and recorded. Once those businesses are gone, and those families are not able to support themselves, those stories are lost,” she said.

“Then it becomes this ‘Disney’ idea of what a Chinatown could or should be,” said Aitken-Turff, who has researched Chinatowns worldwide.

The number of Asian-owned businesses in the United States has fallen by 26% during the pandemic compared with a 17% decline among white-owned companies, a 2020 study by University of California showed.

Ong said language and cultural barriers, limited digital literacy and socio-economic disadvantages have prevented many Chinatown-based business owners from successfully applying for financial aid, or even knowing about available funding.

“It’s not a natural decline. It’s part of a systemic inequality that we’re seeing. We need to pay attention to helping these neighbourhoods survive,” said Ong, who researches Chinatowns and ethnic minority businesses.

“One of the most vibrant aspects of cities is diversity – diversity of culture and diversity of lifestyles. And if we lose that, it just makes the city as a whole a poorer place.”

Alarmed by the rapid demise of these culturally and historically significant enclaves, social media campaigns have sprung up throughout the year, urging Chinatown aficionados to pay a visit or order a take-out to boost economic activity.

Led mostly by millennials from the East Asian diaspora, volunteer groups such as Send Chinatown Love and Welcome To Chinatown in New York have raised hundreds of thousands of dollars and helped shops utilise delivery apps and social media.

“It’s our love letter back to Chinatown because it is these people who took these risks and worked so hard that have allowed so many young Asian people to have the success that we have today,” said Louise Palmer, a volunteer at Send Chinatown Love.

Jennifer Tam, co-founder of Welcome To Chinatown, said her organisation had raised more than half a million dollars for businesses, but with coronavirus infections still raging, the end is nowhere in sight.

“There is still a lot of work to be done in terms of getting these businesses access to financial resources,” said Tam, who volunteers her time to run the initiative.

For Asian food retailer and wholesaler SeeWoo, established in London’s Chinatown since 1975, revenue has plunged 70% since the pandemic hit, but bosses are optimistic about recovering.

Having just launched an online delivery service, managing director Lucy Tse-Mitchell said she was confident Chinatown would evolve into a better version of itself, as it expands into other types of Asian cuisine and reaches a younger demographic.

“Chinatown will bounce back post-COVID, no doubt about that at all because it is a real tourist destination, there are lots of office workers and it’s very fashionable with the younger generation,” said Tse-Mitchell, whose father founded SeeWoo.

“(The pandemic) has fast-tracked what was evolving anyway. I think it will just grow and go from strength to strength.”

Climate action in fashion, as big clothing brands back Bangladesh recycling scheme
Black, gay and happy: is Hollywood ready for that?
Comment