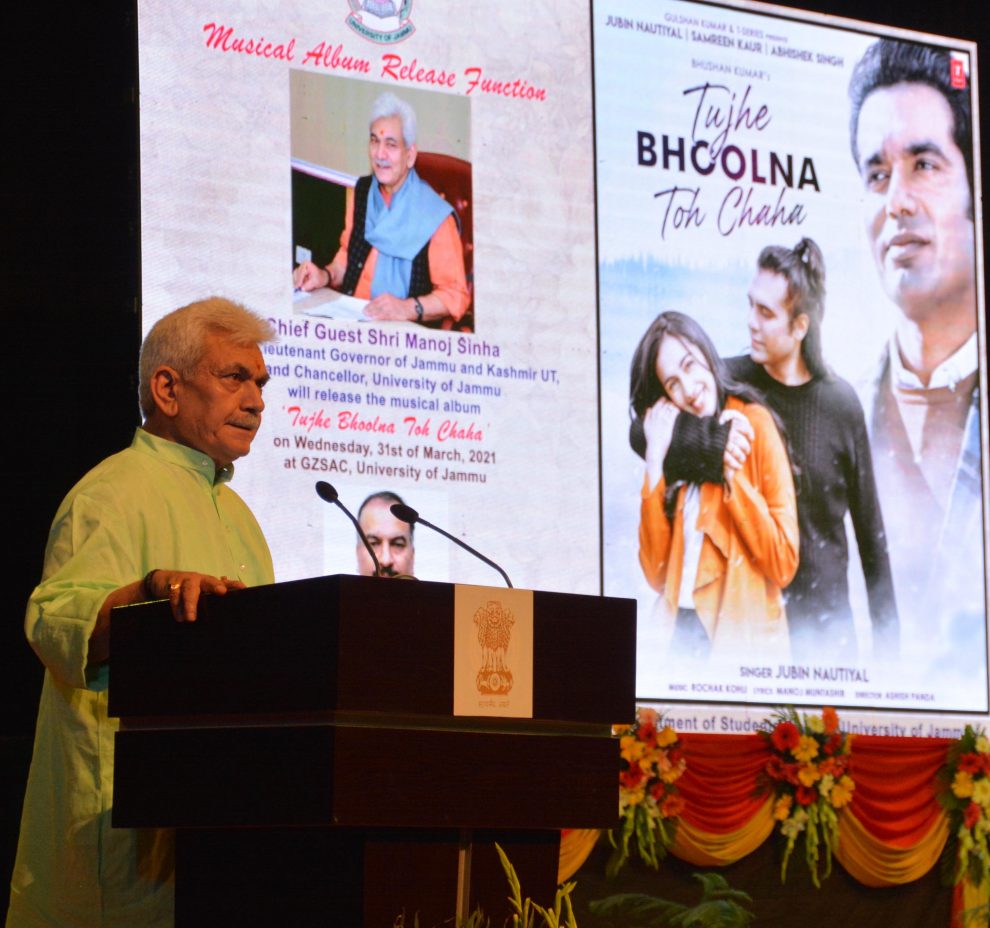 Made under the banner of T-Series and filmed in the picturesque settings of Kashmir valley, the song also features Abhishek Singh, an IAS & actor, and daughter of the soil, Samreen Kaur.

Speaking on the occasion, the Lt Governor termed the occasion as yet another milestone in the direction of making J&K- a preferred shooting destination for the film-makers.

The aesthetic beauty of J&K has been beautifully captured through the song. It also marks the revival of J&K’s halcyon days of being a cinematographer’s delight, he added.

The Lt Governor observed that J&K has always been a famous film-shooting destination. The golden era is back and many filmmakers are ready to shoot their movies, web series and music albums in the UT.

J&K Government is all set to welcome the film-makers from all over the world again. We want to bring back the 1980s era to the film industry in J&K, and make Union Territory the most favourite destination of filmmakers worldwide, said the Lt Governor.

The coming of number of famous film personalities like Imtiaz Ali, Irshad Kamil, Madhur Bhandarkar, Siddharth Roy Kapur and other big names and  production houses to the UT in the last few months has once again deepened the connect between J&K and the film industry, added the Lt Governor.

Highlighting the reformative measures being taken by the UT Government for making J&K a hub for filmmaking, the Lt Governor observed that the UT Government has developed one of the finest Film Policies which will revive J&K’s incredible glory in Indian Cinema. For facilitating the film-makers, and encouraging the local talent, besides providing more livelihood opportunities to the youth, the J&K Administration has recognized Film as an industry, he added.

Government has assured Single Window Clearance, security and world-class facilities to the film-makers coming to the UT, the Lt Governor maintained.

The Lt Governor observed that Betaab valley in Pahalgam gained prominence worldwide due to the shooting of a film there. Film-shooting will not only develop the tourism sector, but will also give fillip to the socio economic development of the region, besides opening up more avenues and opportunities for the local youth, artists and technicians, he maintained.

Recalling his interaction with prominent film personalities during his visit to Mumbai, the Lt Governor observed that the film industry is ready to capture the pristine beauty, breath-taking natural settings & serene valleys of J&K, and showcase it on the silver screen.

Once again, the natural beauty and untapped potential of J&K will be put up in the canvas of cinema worldwide. Work is underway to develop Film city, Film Training Institute, production house and National School of Drama’s  regional campus in the UT in coming days, the Lt Governor maintained.

The Lt Governor expressed his gratitude towards the Hon’ble Prime Minister for encouraging the film-makers from across the country to shoot their films in J&K. He also thanked the Prime Minister for allocation of Rs 786 cr for promotion of Tourism in J&K, which is Rs 509 cr more as compared to the previous year.

To unlock J&K’s vast tourism potential, the Government is laying special focus on developing Tourism infrastructure, besides promoting unexplored tourist places of the UT and tourists locations of Jammu including Patnitop, Mansar, Surinsar, Rajouri, Poonch and Kishtwar. Tourist circuit is being prepared to connect the potential Tourist places in and around Jammu to attract film-makers and tourists, said the Lt Governor.

The Lt Governor also felicitated the artists of the music album on the occasion and asked the youth to take inspiration from them and follow their own passion. He congratulated the entire team and wished them high success.

Sharing his experiences, Jubin Nautiyal called J&K- the most beautiful place in the world. He urged the filmmakers from across the world to come to J&K and experience its beauty.

Sh. Abhishek Singh, IAS, who is the leading actor of the newly released song, expressed his gratitude towards the J&K Government for the support provided during the filming and promotion of the song.

Prof. Manoj Kumar Dhar, Vice Chancellor, University of Jammu, in his address highlighted the measures taken by the University for promoting innovation, entrepreneurship and skill development.

Live performances by Jubin Nautiyal and Abhishek Singh, supported by the artists of Saptak music band, received a standing ovation from the audience.

Jubin Nautiyal infused the patriotic spirit in the celebrations of Azaadi ka Amrut Mahotsav by singing a patriotic song.

Local artists and students of Jammu University performing during the Duggar Cultural Bonanza enthralled the audiences.

Pt Sunil Bharala, MoS, UP and Justice AR Masoodi were also present on the occasion.