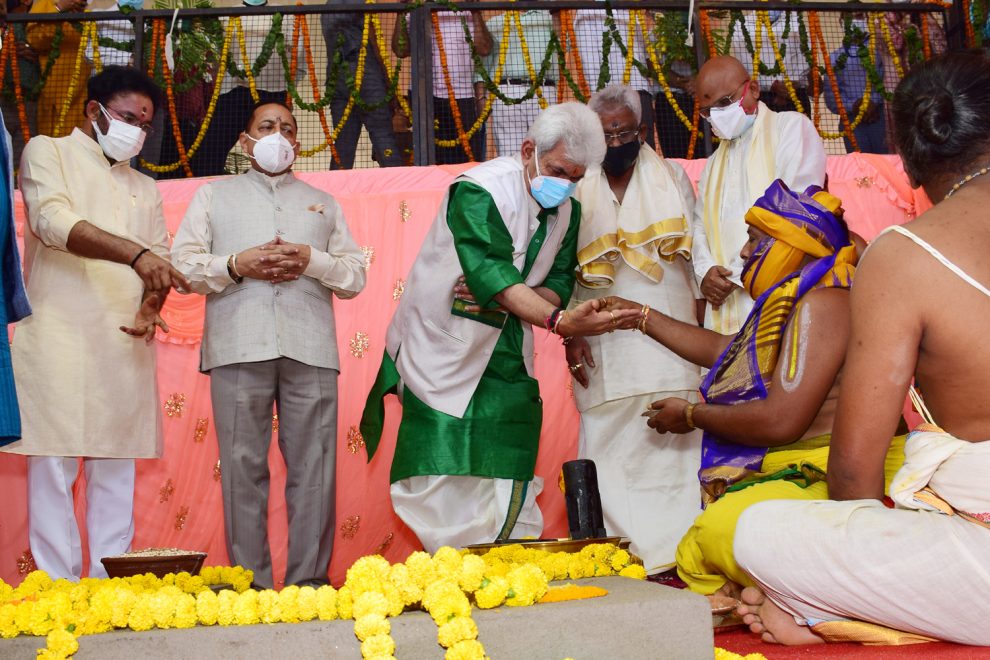 Jammu, June 13: In a major push to religious and pilgrimage tourism in J&K, the much-awaited Bhoomi Pujan ceremony for construction of Sri Venkateswara Swamy Temple by Tirumala Tirupati Devasthanams (TTD) was held today at Majeen here in adherence of all Covid SoPs.

While speaking on the occasion, the Lt Governor said that the magnificent divine temple when completed will be a centre of faith as well as a destination of spirituality.

He further informed that the Tirumala Tirupati Devasthanams Board will establish a Gurukul/Veda Pathshala to promote the Sanskrit language and ancient culture of Vedic teachings and learning. The board has also agreed to set up centres of excellence in the field of healthcare on the lines of its excellence centres in Andhra Pradesh.

Terming the occasion as a historic and proud day for J&K, the Lt Governor expressed gratitude towards Tirumala Tirupati Devasthanams Board and the Union Government for fulfilling the long pending wish of people of J&K and North India for establishing the temple of Lord Balaji on the land of Shri Mata Vaishno Devi.

“Lord Balaji’s divine blessing is a state of inner celebration. Ved Pathshala in the second phase will strengthen the foundation of Indian culture. The construction of the temple will also open up opportunities across sectors and it will certainly change the economy of the region”, observed the Lt Governor.

The Lt Governor said that except for the main pujaris of the temple and the core supervision team, it will also have a large number of local people for the management, thus providing direct and indirect opportunities to the people of the region.

Spreading over 62 acres of land at village Majeen in Jammu, the temple is expected to be completed in 18 months in two phases, at the cost Rs 33.22 cr.

Pertinently, the Government of J&K has granted the land to the TTD Board in Village Majeen on a lease basis for a period of 40 years.