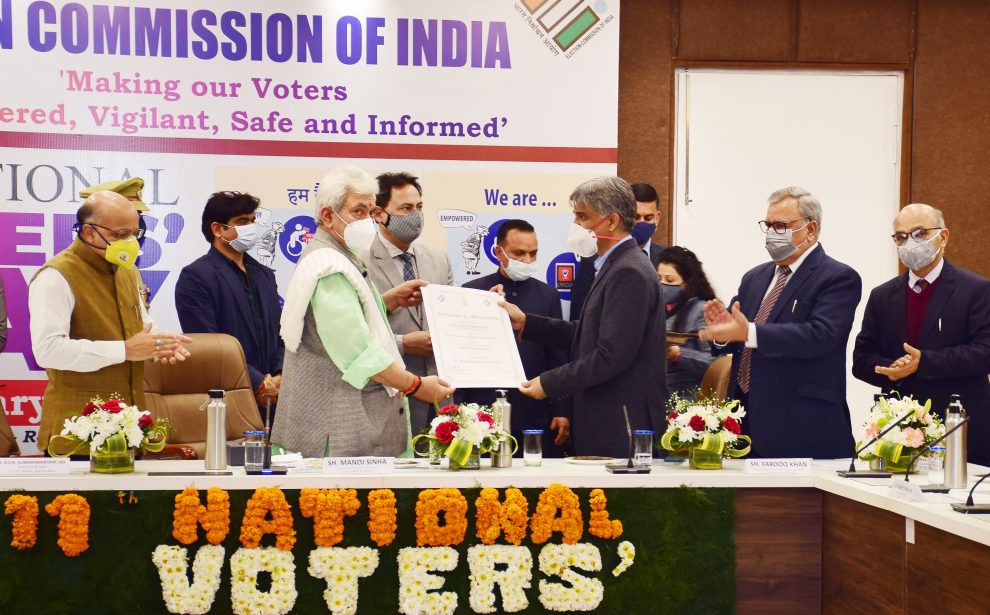 JAMMU, JANUARY 25:  National Voters’ Day was celebrated with much enthusiasm across the Union Territory of Jammu and Kashmir, with Lieutenant Governor, Manoj Sinha leading the celebrations.

To mark the day, the Lt Governor inaugurated Nirvachan Bhawan at Rail Head Complex, Jammu and administered the National Voters’ Day Pledge to the officers/officials present there.

Acknowledging the officers for their outstanding contribution in the electoral process, the Lt Governor felicitated the officers for playing a significant role in the successful conduct of the elections in J&K.

Speaking on the occasion, the Lt Governor underscored the high importance of educating voters about exercising their Right to Vote.

“Celebration of the Voters’ Day is a reminder to all the eligible voters about their responsibility to participate in the electoral process thereby strengthening the democratic framework”, said the Lt Governor.

The Lt Governor congratulated the whole election machinery on the celebration of foundation day of the Election Commission. He expressed delight to be a part of the celebrations of National Voters’ Day and termed the voters as the biggest strength of Democracy.

Laying special emphasis on increased use of communication technology to make the voters aware and making the electoral process more participative, the Lt Governor observed that this year’s National Voters Day theme of “Making our Voters Empowered, Vigilant, Safe and Informed” focuses on to deliver election-related services through IT tools and technological interventions bringing in more efficiency, widespread reach, and accountability, through finest strategies involved in view of the COVID pandemic.

The vision of grassroots democracy was laid by the founding fathers of our Constitution to realize the dream of inclusive development envisioned by Mahatma Gandhi, said the Lt Governor.  He expressed his gratitude towards all the voters of J&K who actively took part in the biggest festival of democracy.

Terming Three-Tier Panchayati Raj system as the engine of development, the Lt Governor observed that with establishment of 3-tiers of democratic setup for the first time in the UT, the pace of development has been accelerated, thus paving way for progressive future of J&K.

With elected representatives of J&K complementing the Government’s efforts, schemes and projects envisioned for the welfare of the people will reach every household and J&K will achieve new heights of development, he added.

Applauding the determined efforts of the election machinery for smooth conduct of elections even in many remote and hilly areas, in spite of the harsh weather, and Covid pandemic, the Lt Governor hoped that they will continue to give their valuable contribution in the conduct of free and fair elections.

Quoting Baba Saheb Bhimrao Ambedkar, the Lt Governor observed that Right to Vote is the pillar of democracy, and if anyone is deprived of this right, it will be a blow to the very core of democracy.

This spirit gives India’s democracy a separate place in the whole world. It was the foresightedness of the framers of the Constitution. All this was a concerted effort to strengthen democracy, and today the entire nation is grateful to them, the Lt Governor maintained.

Highlighting the significance of celebrating the National Voters’ Day, the Lt Governor said that the electoral system that framers of our Constitution created, the laws that were enacted, were meant to strengthen the right to political equality in our democratic setup.

“It is a matter of pride. The way the Election Commission is constantly enriching the election process, it also inspires citizens. Through, Electronic Electors Photo Identity Card (e-EPIC), a new system made using Digital Voters Card Technology, in which information about the elections to be held in the area will be available along with complete information about the voter”, observed the Lt Governor.

Sh. Farooq Khan, Advisor to the Lt Governor, in his address, elucidated the significance of observing the National Voters’ day. He termed the recently held DDC elections as a landmark in the history of J&K. He also lauded the role of the Election Commission and other institutions involved in the successful conduct of elections.