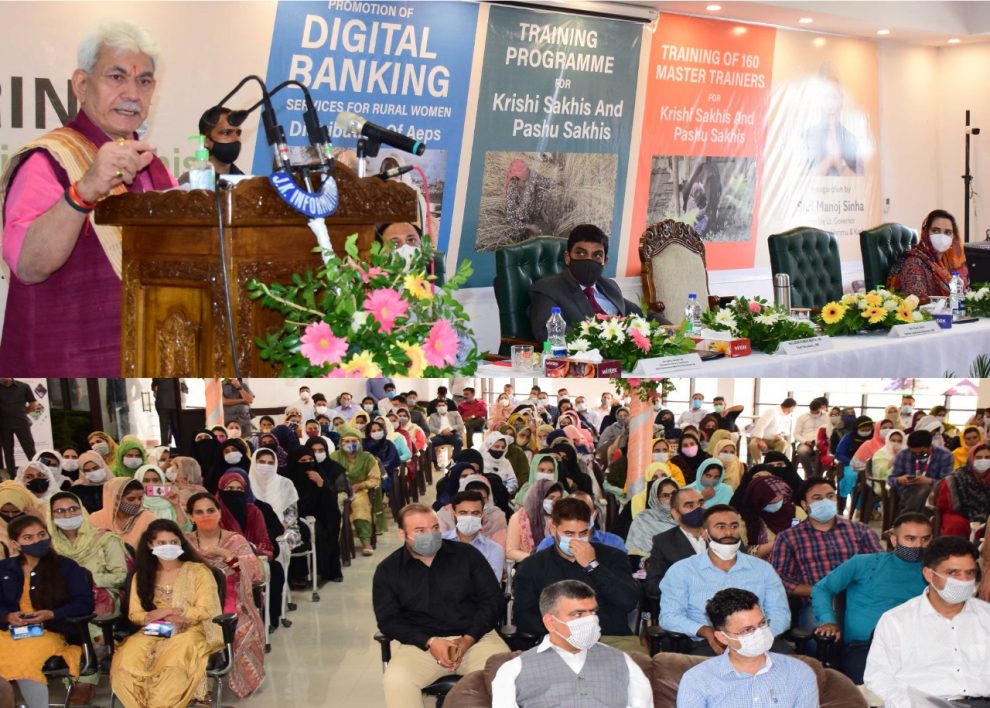 Initially, the DIGI-Pay facility will be provided in 2000 remote villages of the UT and in the first phase, 80 women from Self Help Groups from across the Jammu and Kashmir Division have been selected as DIGI-Pay Sakhis.

On the occasion, the Lt Governor distributed 80 Aadhaar Enabled Payment Systems (AEPs) among the DIGI-Pay Sakhis under JKRLM. He also inaugurated a week-long training program for Krishi Sakhis and Pashu Sakhis on sustainable agriculture and livestock management.

Terming Nari Shakti’s social and economic independence as the bedrock of any nation’s progress, the Lt Governor said that the J&K government has started a mass movement for the socio-economic upliftment of women across the UT.

“These three new initiatives of Digi-Pay, Krishi, and Pashu Sakhi, besides several other programs of women empowerment such as Hausla, Tejaswini, UMEED, Rise Together will further accelerate efforts of J&K government in Empowering Women and making them key partner in UT’s development journey”, he added.

The Lt Governor outlined that DIGI-Pay Sakhi has introduced financial inclusion within the UT’s Self Help Group (SHG) ecosystem, creating much needed financial access points with greater transparency even in the remotest of the areas.

Apart from depositing money, the village population can also avail the benefits of the additional banking and financial services such as Pradhan Mantri Kisan Maandhan Yojana, registration of Kisan Credit Card etc, the Lt Governor added.

The Lt Governor underscored that it was due to the visionary efforts of Hon’ble Prime Minister, Shri Narendra Modi Ji that the vast marginalized section of our country’s population got connected to the formal financial system through the Trinity of JAM- Jan Dhan, Aadhaar and Mobile.

We are following the ideals of the Hon’ble Prime Minister and creating new mediums to take the banking services to the doorsteps of the people. Sustained efforts to achieve financial inclusion have empowered the deprived sections by giving financial assistance, benefits of PM-Kisan, increased wages under MNREGA during the Corona pandemic, the Lt Governor observed.

While highlighting the contribution of women in the rural informal sector, the Lt Governor said the initiatives like Krishi Sakhi and Pashu Sakhi will go a long way in empowering our women in agriculture and the allied sector.

Asserting that the development of a family, society, region, country, world and humanity is incomplete without women empowerment, the Lt Governor said that the UT the administration is taking several ground-breaking steps to transform the lives of women of Jammu and Kashmir, especially those living in rural areas by engaging them into gainful livelihood interventions.

With increasing female literacy rate; providing access to quality education; encouraging more and more women to become entrepreneurs, and providing financial support for the upliftment of women, J&K is leading by an example in terms of women empowerment, he added.

The Lt Governor also made a special mention of women folks from across the UT who are inspiring others and lauded their contribution for building a developed and prosperous Jammu Kashmir.

On the occasion, the Lt Governor directed the Rural Livelihoods Mission, J&K to train DIGI-Pay Sakhis in 360° financial services training courses run by BSE in J&K.

On August 15, the country celebrated its 75th Independence Day with great festivity. Now, the golden opportunity of the next 25 years is before us for the centenary celebrations of Independence and we must strengthen our resolve to establish an egalitarian society without gender discrimination; giving women their due rights in the society, asserted the Lt Governor.

The way the new consciousness has come in the society, the goal of socio-economic independence of women can be achieved, he added.

Dr. Arun Kumar Mehta, Chief Secretary, while speaking on occasion highlighted the Government’s vision for women empowerment in J&K. He listed out various initiatives taken and efforts afoot by the UT administration in that direction.

He urged the DIGI-Pay Sakhis to spread awareness among rural women to avail maximum benefits of various central and UT schemes. He said that the Digi-Pay Sakhis will have a key role in giving wings to the dreams of rural women in becoming independent and progressive women.

Earlier, Dr. Syed Sehrish Asgar, Mission Director, JKRLM gave a detailed presentation on the targets and plan for empowering Krishi Sakhis, Pashu Sakhis, and DIGI-Pay Sakhis. She said that under UMEED scheme, rural women are being empowered and are becoming entrepreneurs, showing the path to many other women.