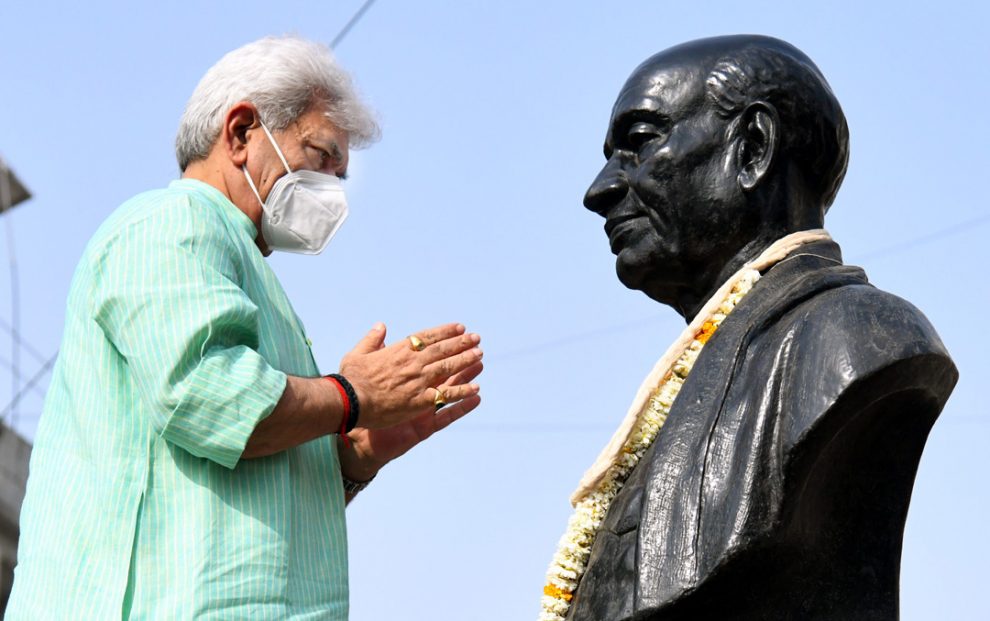 During his visit, the Lt Governor paid humble tributes to the Father of Nation, Mahatma Gandhi. “I bow down to this pious land and thank all my colleagues who are participating in this mass festival”, the Lt Governor remarked.

The Lt Governor also paid floral tributes to the Iron Man of India, Sardar Vallabhbhai Patel at his birthplace, Karamsad.

While addressing a gathering of marchers, the Lt Governor paid homage to Bapu and all the great freedom fighters, who scripted a new history of Indian freedom struggle.

Before starting the Dandi March from Sabarmati, Bapu had said “ I know the path, it is straight and narrow. It is like the edge of a sword and I would be happy to walk on that path”. With this resolve, Bapu along with his companion freedom fighters embarked on a non-violent journey to achieve freedom through Dandi Yatra, that shook the British rule, the Lt Governor added.

The Lt Governor noted that the Hon’ble Prime Minister, Narendra Modi during the 8th  March meeting, while drawing the outline of the Azaadi ka Amrut Mahotsav, suggested celebrating the 75 years of Independence under the Five Pillars – Freedom Struggle, Ideas at 75, Achievement at 75, Action at 75 and Resolve at 75. He said that from the rich saga of Freedom Struggle to our resolve of 75 years, all of us should celebrate this festival with a sense of duty towards the country and achieving the dream of developed India.

The five Pillars that the Hon’ble Prime Minister has spoken about are the divine path of the Azaadi ka Amrut Mahotsav celebrations. In the same five pillars, there is a proclamation of the revolution of development with tradition. We have to bring the saga of our freedom fighters to the people. The stories of their sacrifices and contributions are to be shared among the new generation. “It is to make the new generation aware of the memories of sacrifice made for the nation by great men like Gandhiji, Sardar Patel, Subhas Chandra Bose, Chandra Shekhar Azad, Rani Laxmibai, Lala Lajpat Rai, Lokmanya Tilak”, the Lt Governor added.

The Lt Governor called upon the new generation to draw inspiration from the courage and perseverance of our freedom fighters, who sacrificed their lives to protect the motherland, and contribute towards nation building.

The Lt Governor observed that though 91 years have passed but the energy of great people who took part in the Independence struggle, their consciousness, formulas for building a new India, morality, qualities , godliness are still paving our way for Aatma Nirbhar Bharat.

He also mentioned about the telegrams wrote by the British officials after the arrest of Sardar Patel and how the undeterred resolve of Mahatma Gandhi and our freedom fighters shook the very foundations of the British rule in India.

Recalling his visit to Bagoona in Samba, J&K, the birthplace of first recipient of Maha Vir Chakra Brigadier Rajinder Singh, during the curtain raiser event of Azaadi ka Amrut Mahotsav, the Lt Governor spoke about the courage displayed by Brigadier Rajinder Singh and his soldiers while safeguarding the territorial integrity of Jammu and Kashmir.

In every region and corner of the country, there are imprints of the sacrifices of our founding fathers and 75 years of Indian Independence should hold the spirit of reviving their ideals. The courage and sacrifice of our freedom fighters, martyrs and contribution of every class and section of the society must reach to every individual, the Lt Governor maintained.

He called for spreading the voice of the great saints of Gujarat in schools and colleges and making them available in the libraries of other parts of the country as well.

The Lt Governor further called for putting collective efforts in the same direction so that when the new generation celebrates the 100th Independence Day of the country in 2047, we have a tremendous treasure to spread our culture and rich traditions that has been raised on the occasion of 75 years of Indepence.

We have to work on new ideas for a self-reliant India and to bring glory to India. Let us all work on fulfilling our obligations for the future of golden India of 2047, concluded the Lt Governor.