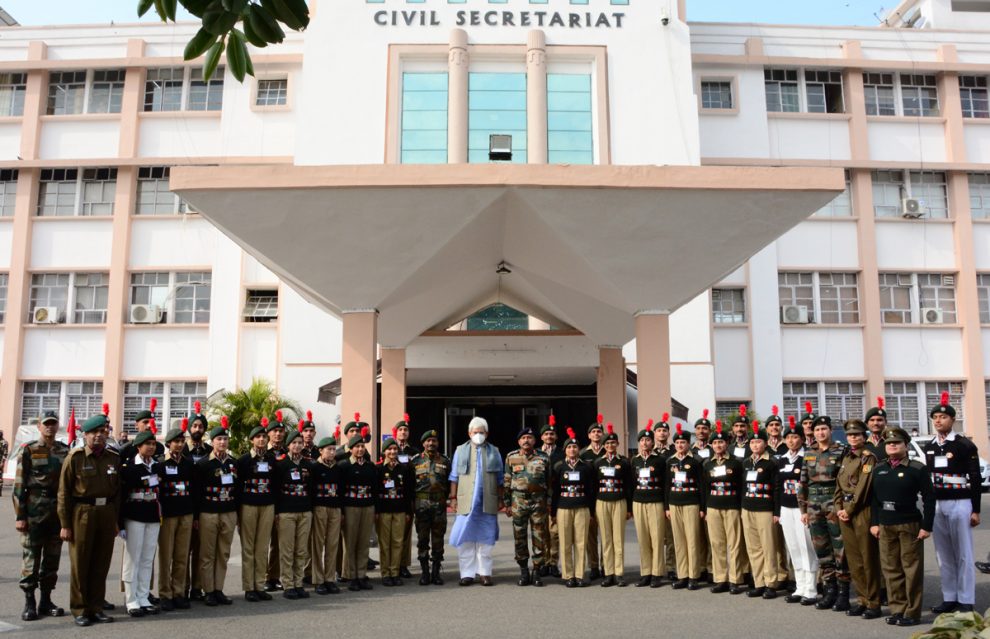 The Lt Governor congratulated the Cadets who got an opportunity to represent the UTs of J&K and Ladakh and lauded the commitment of Cadets and their training instructors who, despite COVID did so well at training.

Terming NCCCadets as the brand ambassadors of Unity, Discipline, Culture & Heritage, the Lt Governor called upon the youth of J&K to join the organizations like National Cadet Corps (NCC) which inculcate discipline and the spirit of amity and harmony.

He stressed upon the need to step up the efforts on the part of NCC Directorate of J&K and Ladakh and Education Department to engage more youth in NCC activities, with special focus on rural areas.

The Lt Governor expressed delight that this year, Jammu & Kashmir and Ladakh Directorate received awards from Raksha Mantri & Raksha Rajya Mantri, besides DG Commendation. He advised the Cadets to make the most of the learning gained from the experience and wished them high success in their future endeavours.

Cadet Iqra Fayaz from Anantnag shared her experience and learnings during her time in the Republic Day camp. Similarly, Cadet Aman Singh expressed his pleasure for getting the golden chance after a strict screening and selection process to become a part of the J&K and Ladakh contingent for the Republic Day parade. Cultural team of the NCC contingent recited a song with the words “NCC ka naara –AatmaNirbhar Bharat Hamara”, penned down by an NCC Cadet.

The interaction concluded with the group pictures of Lt Governor with the Cadets.

“The City of Good Death”: A remarkable debut novel about memory and ritual, and the ways in which we honour the living and the dead

No more buffering as J&K gears up to log-in with 4G after 550 days
4G mobile internet services to be restored across J&K shortly: Govt
Comment