Home The Lead 74th ID celebrated, LG unfurls national flag, no march past due to... 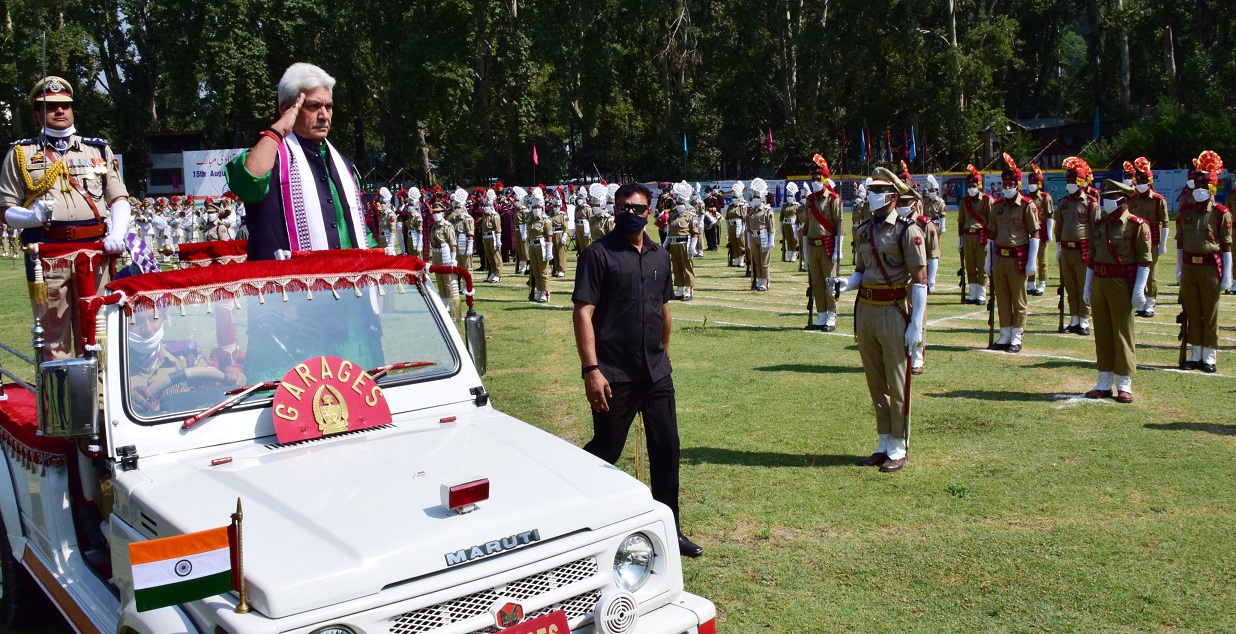 SRINAGAR, AUGUST 15: Lieutenant Governor, Manoj Sinha hoisted the Tricolour at the UT level function on the occasion of the 74th Independence Day, at Sher-i-Kashmir, Cricket Stadium, this morning.

The Lt Governor inspected the parade and took the ceremonial salute.

Following are the highlights of his Speech:

· In his Independence Day speech, the Lt Governor Manoj Sinha observed that 2019 Constitutional change has led to 50 decisions to usher in a new era of normalcy and development in J&K.

· Giving details of the Government’s initiatives, the Lt Governor said that New Domicile Rules and Reservation Policy shall provide equality and justice to the deprived sections like West Pakistan Refugees, Pahari-speaking people, Safai-Karamis and women married outside J&K. Reservation policy is also being made more effective and inclusive, he added.

· The Lt Governor said that J&K is at the forefront of the implementation of PM Jan Arogya Yojna – Ayushman Bharat with 30 lakh beneficiaries. The Lt Governor announced the benefits of JK Health Scheme to One Crore more beneficiaries making it the first of its kind scheme in the country covering Universal Health Insurance for the citizens.

· The Lt Governor Sinha recalled sacrifices by countless freedom fighters & offered tributes & gratitude to them. “This day inspires us to preserve & protect the Independence & integrity of our country & create a poverty free, disease free & illiteracy free society”, he added.

· The Lt Governor also expressed his gratitude to J&K Police, Central Paramilitary Forces and the Brave Jawans of Military, who offered the ultimate sacrifice to ensure the integrity and freedom of the nation, and ensure that the citizens of the country live a secure and peaceful life. This is the occasion to remember Ajay Pandita and Wasim Bari, who laid down their lives to defend the idea of India, he added.

· “J&K people had upheld national integration during the partition. This place is remembered for bravehearts like Brig Rajinder Singh and Brig Usman, and is the land of Rishi Kashyap, Prophet Mohammad, Guru Nanak & Buddha”.We have to carry forward this legacy of religious inclusivity, he continued.

· The Lt Governor remembered the time honoured tradition of J&K from Kalhan’s Rajtarangini to Shankaracharya’s Advaita, Sufi Islam to Buddhist philosophy of Mahayana reflected in the peaceful & syncretic co-existence in the inhabitants of this land.

· He said that youth has the power of transformation, his own student life was marked with activism; he asked youth of J&K to direct their activism towards development as future leaders of the country.

· The Lt Governor observed that the people of Jammu and Kashmir fully immersed themselves in upholding the spirit of national integration. J&K has always been an integral part of the existence of India in each and every respect – culturally, politically, socially, and spiritually.

· The people of this land have always steadfastly rejected this bigoted ideology. The rejection is directly a consequence of the fact that the labels ‘Hindu’ and ‘Muslim’ have always been only descriptions rather than manifestation of a division in J&K.

· Jammu and Kashmir has offered an invaluable contribution to nurture and ensure a cultural harmony and peaceful co-existence between Hinduism and Sufi Islam. The traditional cultural harmony of Jammu and Kashmir has ensured the peaceful co-existence of Hindus and Muslims, mutual respect for their places of worship, and offered a new paradigm of the protection of not just cultural mores, but also religious rituals.

· We want to make development, peace, progress and social harmony the most integral part of the narrative of Jammu and Kashmir. It is my strongest and cherished belief that Jammu and Kashmir will immensely contribute to the realization of our dream of ‘Ek Bharat Shreshta Bharat’, he continued.

· The Lt Governor affirmed that the Government is committed to providing a better alternative for the people of Jammu and Kashmir. An alternative that stands for development, welfare and social transformation.

· The goal of rapid and accelerated development of Jammu and Kashmir will yield phenomenal result. In the history of Jammu and Kashmir, never before have schemes and programs been executed with such speed and precision. This will truly reflect the spirit of Hon’ble Prime Minister’s slogan “Sabka Sath, Sabka Vikas, Sabka Vishwas”.

· Things have started to change now. Works which were never executed in 70 years are being executed now. After 70 long years, drinking water has been made available in the Mohra Ambkhori mohalla of Kangri village in Rajouri. In Budgam Laripora canal has been rejuvenated after 70 years of lying in a decrepit state. The villages of Keran and Mundiyan in Kupwara are being connected to the electricity grid after 70 years. Drinking water is being made available to Dheerti Village of Reasi district and Chumtihal village of Anantnag District after 70 years. People like Dipu Devi of Valmiki Caste have finally got their rights. 102/108 Ambulance Services have been started in Jammu and Kashmir, years after the service was started in other regions of the country.

· The Rambagh Flyover in Srinagar, pending for nearly 5 years, has been completed and thrown open to public. Work on Jammu Ring Road, Akhnoor Road and other prominent road projects has been expedited. Work has commenced on the Pakal-Dul Hydro-Electric Project. Kiru, and Ratle Hydro-Electric power projects will truly convert Jammu and Kashmir into a power hub. The new tunnel at Banihal on Jammu-Srinagar national highway and the World’s Highest Rail Bridge on River Chenab will both be completed in 2021.

· In 2022, Kashmir will be connected all the way to Kanyakumari by railways. The Shahpur Kandi and Ujh Irrigation projects, languishing for decades, will now in a few years provide irrigation facilities to more than one lakh hectares of unirrigated land and transform the agrarian scenario of the region. Rupees 6000 crore mobilised through JKIDFC is ensuring speedy completion of languishing projects. This is being accomplished even as the COVID-19 pandemic has affected every sector.

· Our sole target is to ensure the welfare of all. Through Individual Welfare Schemes, focus has been laid on 100 % coverage of beneficiaries. 100% coverage has been achieved in schemes like Saubhagya, Ujala and PM Ujjwala. In Saubhagya, J&K has been awarded National Award of Rupees 100 crore. 15.9 lakh families have received LED lamps under the Ujala Scheme. More than 12 lakh families have benefitted from LPG connections provided under Ujjwala Scheme.

· Pensionary benefits have been given to more than 7 lakh people, which marks a huge jump of 59% from last year. Transgenders are also benefitting from regular pension. 5 lakh students are now availing the benefit of minority scholarships, which is a gigantic increase of 266% from last year. Jammu and Kashmir is at the forefront of the implementation of PM-Jan Arogya Yojna- Ayushman Bharat and PM-Kisan.

· The Lt Governor said that the Government is planning to create more smart cities like new Jammu and new Srinagar, which will be counted among the most advanced cities of the world.

· We are proud that during the visit of Honble. Prime Minister Shri Narendra Modi, the seed of the endeavour to provide 100% piped drinking water connections was sown. We will be at the forefront of ‘Jal Jeevan Mission’. Srinagar and Ganderbal districts have already achieved 100 % coverage, and we hope that Jammu and Kashmir will be ahead of every other region by attaining 100% coverage by December 2022.

· The Hon’ble Prime Minister has recently announced a mega package under ‘Atmanirbhar Bharat’. Jammu and Kashmir is promise bound to extract the maximum benefit from this scheme to revive its economy, and accelerate its progress. 8 task forces have been specially created for dedicated implementation of the package, and we will try to acquire a benefit of Rupees 20,000 crores from it, he added.

· He hoped and wished that the endeavour to strengthen cultural relations shall not be restricted to a specific area, rather people of Jammu and Kashmir should forge strong relations with each and every region of the country.