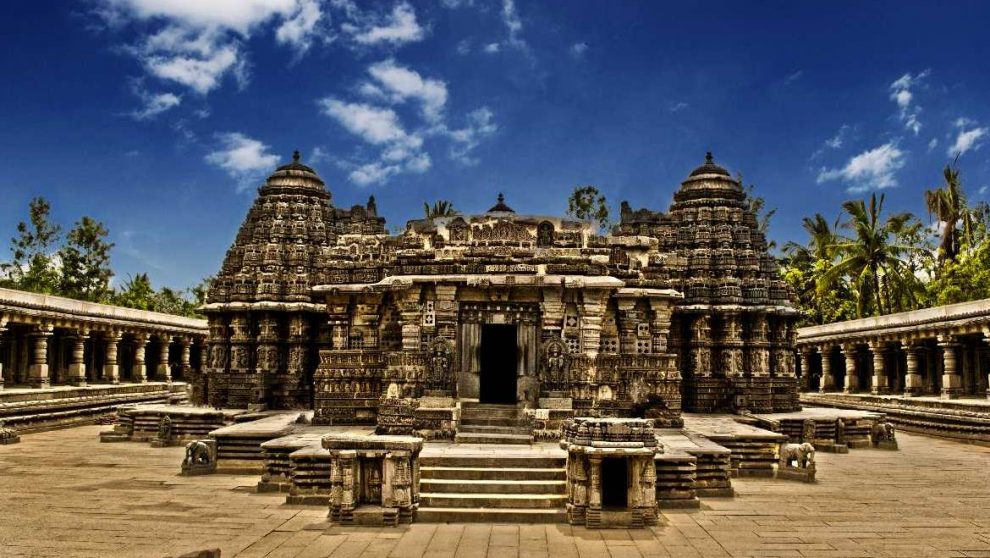 The erasure of the Deccan from our historical consciousness is one of the strangest reversals of fortunes in Indian history, especially given what its contemporaries thought of it.

Think about the last major Indian empire before this period, that of the Guptas. The Guptas are increasingly present in popular ‘historical’ fiction in India, always a good metric of the recognizability of a historical dynasty to a general audience (not coincidentally, Maratha, Mughal, Rajput and Chola fiction are also high up on the bestseller list). The Guptas are often thought of as the Indian Golden Age, the pinnacle of India’s religious history before the coming of the Turks, as well as the apogee of Indian architecture and martial power and art and poetry. Yet on every one of these counts they pale in comparison with their successors in medieval India in general, and the medieval Deccan in particular.

At their peak, almost the entirety of India south of the Narmada would pay the Vallabhas tribute and acknowledge their overlordship – a record matched by no Deccan or south Indian polity before or since. In comparison, Gupta influence was predominantly felt in Uttar Pradesh and Bihar, though they exercised some control in Madhya Pradesh and Gujarat and may have received tribute from as far away as regions in modern-day Pakistan in the northwest of the subcontinent. These north Indian kings only ever managed to attack southern India once, under the reign of the ruthless Samudragupta. Compare him to the five Deccan Vallabhas who attacked north India, one (Indra III) reaching as far as Kannauj. One (Vijayaditya I) may have made it as far as the Ganga before being captured, another (Dhruva I) smashed two of north India’s most powerful armies near the confluence of the Ganga and Yamuna. At least two (Krishna III and Someshvara I) sacked, burned and subjugated Madhya Pradesh before turning their attentions elsewhere. To the medieval Deccan mind, the Gangetic plains were little more than a stage for the display of their intimidating military might before the shocked eyes of the subcontinent’s other kings.

And who were these other kings? Barely a century after the collapse of the Guptas, their political legacy in north India almost completely vanished, to be replaced by other dynasties – the Maukharis, the Pushyabhutis, the Palas, the Pratiharas and, later, the Chandellas, the Paramaras, the Gahadavalas, the Chahamanas and many others – some of whom we will meet through the course of this book. Many of these medieval dynasties arguably left a far deeper imprint on India’s literary and aesthetic culture than the Guptas ever did.

Yet all of them pale before the extraordinary power and influence of the emperors of the Deccan, who shaped the fate of many modern-day Indian states, some of which exceed the size and population of European countries. The Kakatiyas of Telangana and the Hoysalas of Karnataka, both of whom still occupy a hallowed place in regional memory, were vassals of the Deccan Vallabhas; they broke free in the chaos that engulfed the Deccan in the thirteenth century, before the invasions of the Delhi Sultanate. The Kadambas and the Shilaharas, their vassals in Goa, founded the great port of Gopakapattinam, which would eventually draw the avarice of the Portuguese and form the nucleus of what is now Old Goa. The bloodthirsty campaigns of the Vallabhas even, inadvertently, led to the emergence of the famous imperial Cholas of the eleventh century. How ironic that when south India is remembered at all in popular Indian history it is only the Cholas who feature in it, totally overshadowing the Chalukyas and the Rashtrakutas, their accidental preceptors and deadliest rivals.

All this is just the tip of the iceberg, a simplistic comparison of the military and political aspects of power that loom so tall in our modern historical consciousness. You’ll see here, as we explore the other aspects of medieval Indian power, that the lords of the Deccan really made India.

Hinduism as we know it in southern India might not have existed if not for them. Think of temple visits, for example: when the Deccan began its long trek to imperial power, the idea of enshrining Hindu gods in temples was still new, and primarily a north Indian one. As part of their propaganda projects, Chalukya kings lavished patronage on this new ‘Puranic’ form of Hinduism, creating a religious practice focused on pilgrimages and on ritual worship at temples built by kings. This decision was hugely significant in the fractious religious landscape of medieval south India, where religious sects professing many different rituals and routes to salvation competed for influence, land, patrons and devotees. The patronage of the Chalukyas, and kings like them, would swing the balance of power decidedly in favour of the many religious practices that we now call Hindu. But in the Deccan, this ‘Hinduism’ coexisted with an innovative form of Jainism that drew on a similar set of practices: organized monasteries, temples, public rituals, pilgrimage. South Indian Jainism, patronized by the Chalukyas’ successors to Deccan overlordship, the Rashtrakutas, was a unique, warlike form of this ostensibly peaceful religion, and was very popular with the Deccan’s glamorous military aristocracy. The staggering plurality and contestation that marks medieval Deccan religion is an important counterpoint to our popular notion of India as an eternally or unchangingly Hindu country.

As with religion, so with many other aspects of medieval India. The Deccan, as the subcontinent’s dominant power, straddled axes of exchange stretching from Kashmir to Kanyakumari, from Sind to Bengal. Ideas and migrants poured in, drawn by the Vallabhas’ wealth, and they mingled with the peoples of the heart of the subcontinent, arriving at uniquely Deccan forms that would in turn spread out to influence the rest of India.

For example, the earliest Deccan temples – some of which are the oldest still-standing temples in the subcontinent today – freely took elements from both north and south India. But Deccanis soon began to innovate entirely new plans of their own. As the Deccan grew ever more socially and politically complex and more influential, we begin to see Deccani temple design elements as far away as Madhya Pradesh, and vice versa. As part of a broader medieval Indian trend towards more elaborate temples based on iterations of simple patterns, the Deccan began to build spectacular star-shaped shrines that have never been equalled since.

The Chalukya emperors also adapted and reworked north Indian Sanskrit political propaganda to suit the Deccan, sparking off generations of imitations and a feverish era of Sanskrit literary production across southern India. Over the centuries, as south India’s cities and courts grew ever larger and wealthier, its aesthetics and its grand religious and poetic ideas, enriched the vibrant intellectual culture of Sanskrit, adding to the corpus of thousands of texts on everything from grammar to architecture to political theory. The successors of the Chalukyas, the Rashtrakuta emperors, turned this dynamic on its head: they took a south Indian Sanskrit grammatical treatise and used it to create a grammar for Kannada, the language of the people of Karnataka, the heart of their empire. In doing so, they set off an explosion of regional literature that lasted off and on for a thousand years – the first time any vernacular language successfully challenged Sanskrit’s dominance of court culture. If not for their activities, it is doubtful that many south Indian languages (with the exception of Tamil) would have the hallowed literary tradition they now do.

And so on, and so on. Through this book, we will delve into the lives of the men who ruled the Deccan and the complex ways in which this region changed over half a millennium. We will explore how art, literature, religion and architecture were influenced by these stories, holding these fragments of history up as a mirror to a dazzlingly complicated past. And we’ll maybe begin to fill in that all-important gap in our concept of what Indianness should mean to us and to the rest of the world.

Though modern Indians have forgotten the Deccan, early modern Indians – in particular, the people of the Deccan Sultanates and Vijayanagara – looked to its ancient emperors for inspiration. The awe-inspiring temples they built across the land impressed many an Adil Shahi sultan, who built palaces in the Chalukya capital of Kalyana and commissioned texts drawing on the culture of their courts, attempting to connect themselves to the Chalukyas’ prestige. The rival kings of Vijayanagara used the Chalukya dynastic crest, the boar, as their imperial standard; a Vijayanagari dynasty explicitly claimed the title of ‘Chalukya Chakravarti’ (Chalukya emperor) for some of its members, and attempted to directly or indirectly control Kalyana; and the empire even reassembled a full-fl edged Chalukya temple tank in the royal centre of the city as a sign of its great antecedents.

All this goes to show that the lords of the Deccan were supremely influential people in Indian history. They are worth understanding on their own terms, as the proud rulers of a proud empire untouched by twentieth-century ideas of how a single ‘Indian’ history should look. But I should clarify again that this book is not a panegyric to them, and that medieval India was a dark, violent and unequal place. The medieval lords of the Deccan were not saintly devotees or noble conquerors or brilliant masterminds. They were human beings doing the best they could, responding to personal disasters, trying to get rich and be happy and find companionship and see beauty in a difficult world. Changing the course of human history was just an unplanned side effect of all that.

Excerpted with permission from Lords of the Deccan: Southern India from the Chalukyas to the Cholas, Anirudh Kanisetti, Juggernaut Books. Read more about the book here and buy it here.

This book presents the true adventure of Navy Commander Abhilash Tomy, the first Indian to complete a solo, non-stop circumnavigation of the world under sail
‘The Stone Tower’ marked the midpoint of the ancient Silk Road: Riaz Dean’s new book pinpoints the probable location of this significant landmark
Comment