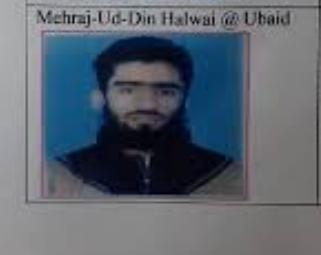 HANDWARA: Jammu and Kashmir police today said that the longest surviving militant commander of Hizbul Mujahideen outfit was killed in an encounter at Pazipora area of Handwara area of Kupwara district on Wednesday.

The Inspector-General of Police (IGP), Kashmir zone Vijay Kumar informed that the oldest and top commander of HM outfit has been killed in an encounter at Handwara saying that the slain was involved in killing of civilians and security forces in north Kashmir.

“One of the oldest & top commanders of HM militant outfit Mehrazuddin Halwai alias Ubaid got neutralised in #Handwara #encounter. He was involved in several militancy crimes. A big success: IGP Kashmir said in a tweet.

In another tweet the police said that “A contemporary of HM’s notorious #militant Burhan Wani. While Burhan was engaged in series of civilian/SFs killings in South Kashmir, Mehrazuddin Halwai was involved in killing of civilians/SFs in North Kashmir.”

Earlier Handwara police in a tweet informed that an encounter has started at Pazipora-Renan area of Kralgund Handwara.

Meanwhile, a police spokesman said that Police along with SSB during routine Naka checking regarding enforcement of Covid appropriate behaviour at Watyen Handwara had stopped number of vehicles which were being checked. “During checking, one pedestrian was behaving in a very suspicious manner, who was tactfully apprehended by the joint Naka party. During his personal search one grenade was recovered from his possession.

Accordingly, he was immediately shifted to nearest police post for questioning. During questioning, he identified himself as Mehraj-ud-din Halwai alias Ubaid Son of Abdul Khaliq resident of Khushal Mattoo Sopore, an active terrorist commander of proscribed terror outfit HM,” the spokesman said. “During further questioning, on his disclosure multiple CASOs were launched by Handwara Police, Army, CRPF and SSB in which at village area Pazipora Renan Kralgund Handwara, when CASO was started, the militant tried to pin point the location where he has kept his arms and ammunition. Upon reaching the disclosed hideout location, the militant picked up his hidden AK-47 rifle and started firing indiscriminately upon the joint search party which led to an encounter. In the ensuing firefight he got killed.”

As per police records, the said militant was a categorized A++ terrorist and was group commander of proscribed terror outfit HM. He was active since 2012 and was involved in several killings in north Kashmir. “He had a long crime history including attacks on Police/SFs and civilian atrocities. He was part of group involved in various terror crimes and several cases were registered against him. He was involved in killing of SPO Mudasir Ahmad Dar of Untoo Hamam Sopore on 28-07-2013, attack on Sarpanch Khazir Mohd Parray of Krankshivan on 26-07-2013, killing of Sarpanch Habib Ullah Mir of Goripora Bomai, attack on Panch Mst Zoona Begum of Hardshiva Sopore, attack on police party at Hygam Sopore along with his associates on 26-04-2013, in which 04 policemen got killed besides, decamped with three weapons of the killed policemen, killing of Hurriyat activists Sheikh Altaf-ur-Rehman of Iqbal Nagar Sopore & Khursheed Ahamd Bhat of Bomai Sopore, killing of ex-terrorists mehraj-ud-Din Dar of Badambagh Sopore & Aijaz Ahmad Reshi of Mundji Sopore.

Besides, he was involved in attacks on various establishments including attack on Hotel Heemal Srinagar.

The killed militant was well acquainted with modern means of communication by which he would communicate with other terrorists and plan & execute different terror activities on ground. “He was instrumental in motivating and recruitment of youth into militant ranks besides raising funds for promotion of militant activities—(KNO)