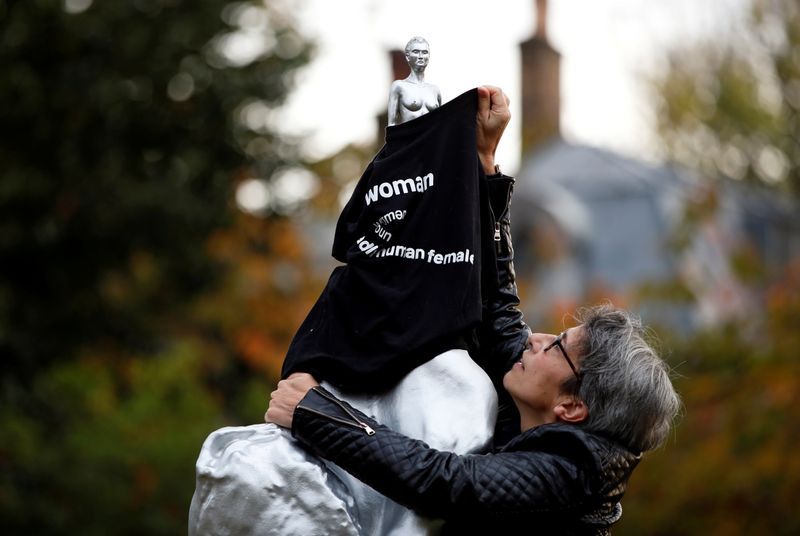 LONDON: A newly unveiled nude female statue in London meant to honour feminist pioneer Mary Wollstonecraft has been targeted by unknown critics who stuck black tape on its breasts and pubic area, draped it in COVID masks and dressed it in a T-shirt.

The sculpture by British artist Maggi Hambling, unveiled on Tuesday, angered feminists and other critics who said the naked figure drew attention to the female body instead of honouring the 18th century intellectual’s achievements and influence.

A key theme in the backlash was that men commemorated with monuments are usually depicted clothed. Hambling responded by saying that she wanted to move away from the tradition of “male heroic statuary” to create something timeless, not historical.

Having received ample media attention all day, the statue was visited in the evening by unknown people who taped up its private parts and placed two face masks, of the kind worn to curb the spread of COVID-19, on its shoulders, like a cloak.

An image of the statue with the tape and masks circulated on social media late on Tuesday. By Wednesday morning, the items had been removed, but a Reuters photographer saw two women drape the figure in a T-shirt and place a placard next to the plinth.

The placard displayed a quote from Wollstonecraft’s groudbreaking work of 1792, “A Vindication of the Rights of Woman”, reading: “Strengthen the female mind by enlarging it, and there will be an end to blind obedience.”

Cast in silvered bronze, the sculpture depicts a small naked female figure with a conventionally beautiful physique rising out of a much taller abstract figure resembling a vertical swirl.

Shortly after the two women covered it in a T-shirt, with some difficulty due to the height of the swirl, a third woman removed the garment using a stick. Groups of onlookers argued about the merits of the statue and of its critics.

The commotion reflected the strong opinions voiced by critics of the statue since it was revealed.

Feminist writer Caroline Criado Perez, who successfully campaigned for a statue of 19th century suffragist Millicent Fawcett to be erected in Parliament Square, called the new sculpture “disrespectful to Wollstonecraft”.

Caitlin Moran, author of the bestseller “How To Be a Woman”, raged against the statue on Twitter, arguing that “being hot and naked so regularly defines women that to deliberately play into it does nothing but reinforce tired old tropes”.

Simon Schama, author of numerous bestsellers on history, wrote: “Always wanted a fine monument to Wollstonecraft. This isn’t it.”

The statue also had its defenders.

Cultural historian Fern Riddell said it reminded her of “how women are created in images that never match their thoughts”, and said people could interpret it however they wanted.