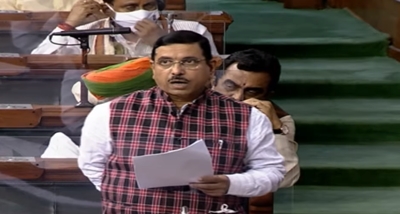 The Bill empowers the Central Government to issue directions regarding composition and utilization of funds maintained by the District Mineral Foundation. The Bill provides that captive mines  may sell up to 50 per cent of their annual mineral production other than atomic minerals in the open market after meeting their own needs.

Moving the Bill, Coal Minister Pralhad Joshi said that it has been brought to reform the mining sector in the country. He said, the country has large reserves of several minerals but they were not properly utilized due to several reasons which have resulted in dependence on imports.

Terming the Bill historic, Joshi said it will increase the production level of minerals, generate employment, increase revenues and ensure private participation in the exploration and mining activities. He added that more than 55 lakh employment will be generated in the country with the implementation of these reforms. He said, the Bill empowers the central government to specify a time period for completion of the auction process in consultation with the state government.

Participating in the discussion, Vincent H Pala of Congress termed this move a desperate attempt saying that the government is facing financial difficulty. He alleged that the Central government is infringing on the rights of the States government. Sunil Kumar Singh of BJP lauded the legislation saying it will bring reforms in the mining sector. The discussion is underway.