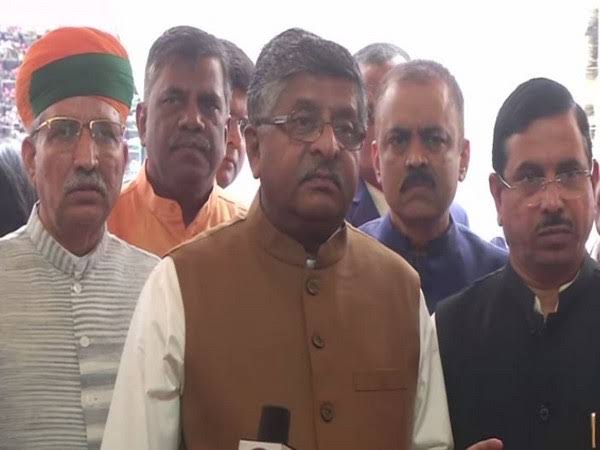 Union Minister Ravi Shankar Prasad on Monday condemned the “reprehensive conduct” of the two Congress lawmakers who clashed with marshals in Lok Sabha, saying that the house is a place for debating and discussion and not for unruly behaviour.
“We want to make our position clear. We condemn the reprehensible conduct of the two Congress members on the foot of the house. The speaker appealed to them to remove the big banner which they erected to obstruct members from asking questions and ministers from replying to it. But they did not listen,” he told reporters at a press conference here. “We again requested them and read out the rules. Thereafter, the behaviour they did with marshals is for all of us to see. We totally condemn this behaviour of Congress MPs and the senior leadership of Congress who did not do anything to prevent this unruly behaviour on the floor of Lok Sabha,” Prasad said.
The Union Minister urged all political parties to respect the sanctity of the Parliament while adding that the Speaker holds the power to take action.
“Lok Sabha is a place for debate and questioning. You cannot convert it into a place for unruly behaviour. Action will be taken by the Speaker. We expect political parties to ensure that the sanctity, serenity and the great tradition of the Lok Sabha and Parliament are restored properly,” he said.
The Lok Sabha was earlier adjourned till 2 pm following a scuffle between the Congress lawmakers and marshals stationed in the Lower House broke out after Speaker Om Birla ordered the security officers to escort the Congress MPs, who were vociferously protesting in the well against government formation in Maharashtra, out of the house.
Birla repeatedly urged Congress members TN Prathapan and Hibi Eden to get rid of the big banner they were carrying in protest and warned them to invoke Rule 373 under which they will be sent out of the house.
Unfazed by Speaker’s warning, the two Congress members refused to let go the banner, following which the marshals were called in to escort the leaders out of the house. However, instead of abiding by Speaker’s order, the two Congress MPs pushed the marshals and refused to leave the premises.
Following the unwarranted chaos, the Speaker adjourned the house till 12 noon. When Lok Sabha reassembled, the house was again adjourned till 2 pm. Ultimately, the Lok Sabha was adjourned till 2 pm tomorrow after a continued uproar over Maharashtra issue in the house.
According to Rule 373, the Speaker, if, is of the opinion that the conduct of any member is grossly disorderly, may direct such member to withdraw immediately from the House, and any member so ordered to withdraw shall do so forthwith and shall absent himself during the day’s proceedings.
A member named by Speaker cannot take part in the day’s proceedings.
Congress MPs and along with leaders of other political parties began protesting on the floor of the House as soon as the day’s proceedings commenced.
Earlier today, Congress interim president Sonia Gandhi led the party’s protest in Parliament premises over the manner in which government had been formed in Maharashtra.
In a surprise development, Devendra Fadnavis was sworn-in as the state’s Chief Minister for the second time while NCP’s Ajit Pawar took oath as his deputy on Saturday morning.