We live in unprecedented times. Words like lockdown are alien, but then the devastation caused by Corona virus pandemic in over 181 countries affecting 500,000 globally with 23,000 dead and counting has nations fighting the crisis on a war footing. Whereby, the principles of ‘Jus Ad Bellum’: right authority, right intention and reasonable hope dictate our responses. When and how it will end nobody knows with everyone scared of even fathoming.

Love him, hate him, agree or disagree but kudos to Prime Minister Modi who led from the front by announcing a “Janata curfew” ten days back to an unparalleled lockdown of 1.3 billion within their homes for 21 days last Tuesday. Drawing an analogy of Ramayana and Mahabharat he said, “A Lakshman Rekha must be drawn outside our front doors and if Mahabharat war took 18 days the lockdown is for 21 days to break the chain of ascending cases.”

As the world reels under Covid 19 the Government is leaving no stone unturned or spared any expense to contain the damage. So far over 800 plus people have been affected pan-India with only 20 dead (at the time of writing). Streets are deserted, trains and flights stopped, shops and businesses shut, millions working out of homes, people learning to manage. There is fear everywhere.

Experts agree that the lockdown gives the Government time to get its act together given our shabby medical infrastructure to find hospitals, beds, equipment, testing centres, kits and medical personnel to combat COVID 19. Over 17 States have earmarked hospitals for dedicated treatment. But clearly this is not enough. It has also announced a Rs 1.70 lakh crore economic package of free foodgrain and cooking gas to the poor for the next three months etc.

Yet, it’s heartbreaking to see expressways across the country dotted with thousands of migrant and daily-wage workers leaving cities trudging back home hundreds of miles away carrying their semi-clad hungry children on their shoulders sans any transport. Asserted, a poor worker, “ Do our rulers really know how the  aam janta lives”?

Of course, the Opposition cribbed about “dramebaaz Modi’s” call for five minutes of clapping for the “warriors in white” and his not doing enough for the poor and workers. Asserted a senior Congress leader, “If our former Finance Minister can come with a with a 10-point plan, why can’t the Government?”

They complained about how the supply chain wasn’t working as inter-State borders are shut and no vehicles allowed to ply etc. Fruit and vegetables are rotting as trucks and tempos are stalled and prices soaring. The Government is lucky that civil society is so weak and so slow to defend its own interests.

But, the nation ignored them and rose in unison to applaud and show their appreciation for the doctors. Modi had put human beings rather than economic targets at the centre of his endeavour to tackle the catastrophe. So far after China, South Korea and Singapore, India is handling the crisis better than others with US surpassing China with over 80,000 cases.

Pandemics are not respecters of political borders, beliefs, ideologies or religions. While US President Trump dismisses is at a “Chinese virus”, not a few call it China unleashing a biological warfare citing a Hollywood movie Contagion, a novel Eyes of Darkness topped by a Chinese serial in 2018 which talked of the Wuhan virus. A mere coincidence?

Economists characterize it as Malthusian Law of Population and the Gaia Hypothesis. Malthus averred when populations grow faster than it is in the power of Earth to sustain them, the effects of these two unequal powers (population and food supply) are kept equal by “positive checks” through famine, disease, poverty, natural disasters and war. Corona is a manifestation. Raising a moot point: Is mankind in a suicidal mood?

The Gaia Hypothesis states that Earth is not an inanimate interstellar body inhabited by animate life forms but a live organism that regulates and controls its own destiny by corrective measures. Any injustice done to Mother Earth is punished by it irrevocably as crime is chastised in court. Consequently, natural calamities are not accidental but are measures Earth takes to correct the anomalies in its existence. Said a cynic, we are on the verge of an apocalypse unless we come to our senses.

Our religious bhaktas are not far behind. While Christian and Muslims aver doomsday is close at hand, Hindu brethren ascribe it to Kalyug wherein our Karmas are leading us inexorably towards universal annihilation. So we see UP Chief Minister Yogi Adtiyanath performing puja at the make-shift Ram temple in Ayodya and Muslim clerics praying to Allah in mosques. Never mind if they violate Section 144: No congregation over five people and refuse to keep a social distance of three feet. Don’t worry, God well protect us. Really?

The environmentalists talk of universal disaster. Succinctly, it’s nature’s way of hitting back with a vengeance. Floods, droughts, earthquakes, freak tornedoes and hurricanes, climate change and global warming with snowcaps and glaciers melting, sea levels rising. Europe experienced an unusually hot summer and Australia had wildfires destroying thousands of hectares of land and roasting wildlife to near extinction.

Undeniably, the pandemic will leave behind a trail of political, economic, social and psychological scars, some of them which will fester for long. Our economy and healthcare are surviving on a fragile survival system which will compound the crisis. Healthcare in most states is poor. Bihar has only one Government hospital bed for a lakh of its people and there are 70,000-100,000 ICU beds across the public and private sectors.

What next? The challenges are huge and everyone will pay a price. The poor, marginalised and the daily wage earners will be hit the most. The economy, which has already tanked will plummet further. Our leaders need a new vision and preparedness to pull us out with minimum collateral damage. It needs to muster all possible talent and build a national consensus.

The Government which spends a measly 1.28% of its GDP on health care needs to increase it post haste.  It also needs to develop a new crisis management protocol and procedures to deal with health crisis to create a massive testing infrastructure, so that even asymptomatic people could be tested and quarantined.

Simultaneously it is a wake-up call to change our chalta hai attitude. Specially, our netas who revel in it, breaking rules ad nauseum.  Images of Madhya Pradesh’s new Chief Minister Shivraj Singh Chouhan with his supporters sticking to each other to get into the photo-frame, thousands of BJP workers thronging streets dancing and celebrating throwing social distancing to the winds, people who refused to quarantine themselves despite doctors orders, VVIPs merrily moving around attending functions, parties and weddings as if there was no tomorrow. Some arrests have been made for defying curfew but that is not enough to discipline all of us.

In sum, we dismissed film Contagion about a microscopic virus which decimated lives as fiction in 2011.Today it is the story of our times. It has held humankind hostage in its vicious tentacles, made us realize how frail we are and need to change our lifestyles and habits. It’s not going to be easy but we have no choice.

Time to get back to basics and reignite the magic of simplicity and minimalism, become more humane and see the world through new lens. Of course, our lives will never be the same again but we need to focus on what we are going to do to make the new normal a good one. What gives? 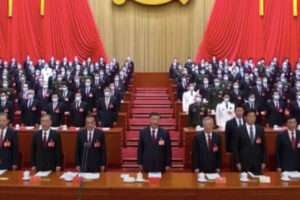 How China Views the World: An Analysis of the 20th CPC Congress Work Report