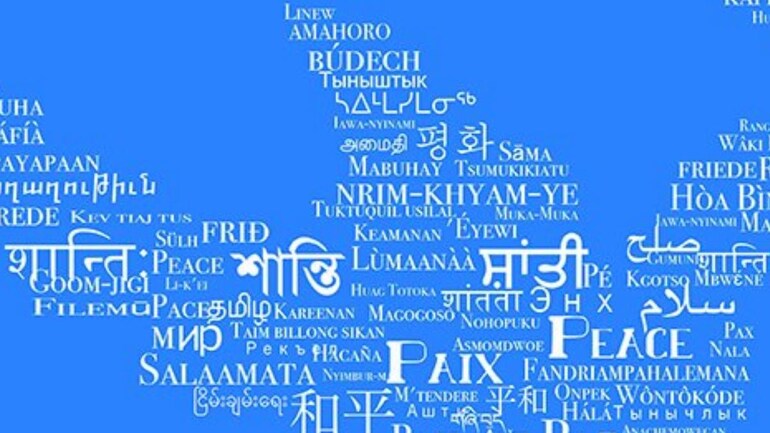 India is a diverse country where many languages and dialects are spoken. According to a report of the 2011 census, there are around 19500 languages or dialects spoken. Only 22 of these are recognised in the Eighth Schedule of the Constitution as the official languages. There is no national language, although a section believes that “Hindi” is.

Recently a popular Bollywood actor Ajay Devgan created a controversy when he tweeted that Hindi is the national language. Uttar Pradesh Minister Sanjay Nishad, supremo of NISHAD party, claiming to represent the communities of fishermen and boatmen and an ally of BJP, said, as reported in the media, that those who don’t speak Hindi should leave the country!

When it is very clear in the Constitution of the country that there is no national language, then why do some public figures keep saying that “Hindi is the national language”? First of all, let’s agree that Hindi is the most popular language and is the most understood one in the country. Although in the 2011 census around 44% identified Hindi as their mother tongue, there is also a section which understands Hindi, despite the fact that it isn’t their mother tongue. Out of them, many can even speak the language. So, those who argue that not even a half of the nation’s population speak Hindi aren’t exactly right as over half of the population understands it. However, this doesn’t give the language a national status.

Trust our politicians not to lose an opportunity to woo and strengthen their vote bank, even if it means joining the bandwagon of the language debate without understanding its intricacies. That’s the reason that a politician from the Hindi belt doesn’t even think twice before saying that those who don’t speak Hindi are “foreigners”. Then there are politicians from the South to convey the message, as loudly as possible, that the imposition of Hindi is completely wrong and they are proud speakers of Tamil or Malayalam or Telugu or Kannada, depending on the State of that politician. How can politicians from West Bengal stay away from such debates which automatically provide them a platform “to show how much they love Bengali”?

No doubt that India is a land of many languages, this tradition has to be preserved, and no language should be imposed on any State or any region. But unfortunately for the politicians, be it from the north to south or east to west, the row triggered by the language debate is more often seen as an opportunity to polarise the voters by keeping them away from the real issues that threaten their electoral prospects. The ultimate aim is to win elections by painting a language as an evil, and this “evil language” varies from States to regions.

This is not to say that no language faces any issue in this country. There are dogged controversies. For example, say the Assamese language, one of the 22 official languages. The last census in 2011 revealed that only 48% of Assam’s population speak Assamese, meaning that it is no longer spoken by the majority. This is definitely a matter of concern.

But apart from 22 official languages, there are many other languages or dialects which are fighting for their existence. Sadly, in the debate of language politics, these don’t find a  mention. One such language is Bishnupriya Manipuri, the mother tongue of this writer. The speakers are largely concentrated in Assam, particularly in Barak Valley, and Tripura, apart from a few districts of Manipur like Jiribam.

Later in 2001, the Assam government finally introduced the Bishnupriya Manipuri at primary levels in areas of the Barak Valley where the community dominates. Yet the language still faces many difficulties. A major issue is that in the Census the name of the community isn’t properly represented. Instead of Bishnupriya Manipuri, the Census has identified Bishnupuriya as a “language”, upsetting the community. Umpteen demands have been made by their organisations to rectify this mistake.

Another demand is to include the language into the Eighth Schedule of the Constitution, apart from the ST-Plain status and an autonomous council in the satellite system for the Bishnupriya Manipuris in community-dominated localities of Assam, Tripura and Manipur. Unfortunately many political parties aren’t interested as the community isn’t a significant vote bank in either of the three States.

Then there are Nepali-speaking Gorkhas in Darjeeling Hills of West Bengal who have often raised their voice against the imposition of Bengali and demanding recognition of their language. The State’s Chief Minister Mamata Banerjee, who otherwise is very vocal against imposition of Hindi in her State, has been criticised by the Gorkhas for doing the same to them. Then there are regional and tribal languages such as Gondi, Chhattisgarhi, Garo, Kokborok, Kamatapuri, Bhojpuri, Lepcha, Mizo, Ho, Angika and many others, which seek inclusion in the Eighth Schedule.

If Hindi is made compulsory in the present three language policy, other than English, an important language, it is likely to be challenging for the minority languages. For example, in  Tripura, if this policy is introduced, it is likely to leave no space for Kokborok, the language of the majority of tribals, as the third language would be Bengali, the State’s dominant language. This is likely to create resentment among the tribals.

In my old village school, three languages are taught — Bengali, English and Sanskrit. There is a fourth — Bishnupriya Manipuri but only for students of the community. If Hindi, a language already the most popular and which doesn’t need to be imposed, is introduced, one language has to be replaced. Is learning Sanskrit, another endangered language and a key to India’s ancient treasure of knowledge, not important? Or is learning Bishnupriya Manipuri not significant for its community?

The fact is that many local languages are on the verge of extinction and such a loss would have an adverse impact on age old traditions and culture, among others. The language debate should focus on larger and critical issues. Let’s not turn Hindi versus Others into yet another vote bank politics. Can there be restraint before it damages the diverse social fabric?