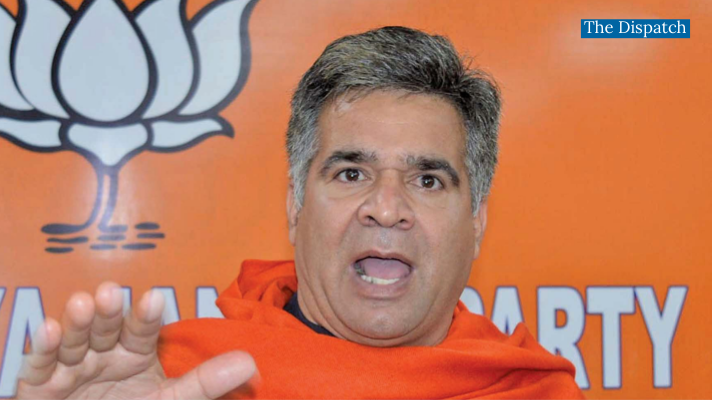 Jammu: Ravinder Raina, the president of the Jammu and Kashmir unit of Bhartiya Janta Party, today alleged that a section of officers in the Union Territory administration was deliberately working against the interest of his party, particularly to diminish the electoral protests.

Raina’s serious allegations came on the day when thousands of employees engaged under the ‘Rehbar’ scheme hit the streets to protest a reported Government move to sack all of them and go for fresh recruitment. Two former Chief Ministers and almost all political parties came in the support of the ‘Rehbar’ employees putting the BJP on the defensive.  Hundreds of people employed under these schemes on Monday assembled outside BJP headquarters and staged a demonstration demanding revocation of the order under apprehension of end of their services.

In wake of political heat gathering momentum the Union Territory government was quick to make a statement that it was not sacking the ‘Rehbar’ employees. The Government made this statement despite the fact that there are documents in the public domain suggesting re-advertisement of posts and a fresh recruitment process through the Service Selection Board. In fact, the government had on Friday re-advertised ‘Rehbar-e-Janglat’, Rehbar-e-Zirat’ and Rehbar-e-Khel’ posts through the Service Selection Board and had said additional weightage and age relaxation will be given to those already working on these posts.

As the employees protested, Ravinder Raina alleged that a lobby is working to defame his party as he tried to pacify angry workers protesting the re-advertising of posts under three schemes where these people were employed. “I talked to Lt Governor (Manoj Sinha) and Chief Secretary A K Mehta on the issue and was told that there is no such order and the news is fake”, he said.

While addressing the protesters outside BJP office, Raina said, “whenever there is a talk of elections, some people in the administration deliberately come out with such types of controversies to defame the BJP which is all set to form the government after the next assembly elections”. He said those found responsible for such rumours should be dismissed from the service, and sought an enquiry into the matter. There is no government order about your termination. I am saying this with full responsibility, he said.

He also referred to an order issued by the higher education department in January directing active participation of teachers and students to perform Surya Namaskar’. This was also a deliberate attempt to create a controversy, he said.

Raina said a committee formed by the government in 2020 had made some recommendations but the final decision will be taken by the administrative council headed by Lt Governor. It was our government that engaged you through proper channels. There are no backdoor appointments and we will not allow any injustice with you, he said.

He asked the protesters to form a delegation of at least 10 members and promised them he will arrange a meeting between them and the Lt Governor.

Raina, who was accompanied by a strong posse of policemen, was greeted with slogans like we want justice by the angry protesters. They said they were not satisfied with Raina’s arguments and said they will continue their protest till the government issues a written clarification.

We want revocation of the order forthwith to safeguard our future. We have served our departments over the past four years and were gifted with this order at a time when we were hoping to get regularised on the completion of our probationary period, a protester said.

He said it was the previous PDP-BJP government that came out with these schemes to provide employment to over 3,000 well-qualified people, and the selection process was done in a fair manner by the concerned deputy commissioners.

Meanwhile, several opposition parties including National Conference and Aam Aadmi Party (AAP) extended their support to the protesting workers and demanded revocation of the government order.

National Conference provincial president, Jammu, Rattan Lal Gupta decried the supposed move to disengage the employees. He said, The motive behind this unprincipled step is clear that the LG’s administration is paving way for outsiders at the cost of local youth.

Former Minister and senior AAP leader Harsh Dev Singh also condemned the supposed decision, and said educated were not disposable. This use-and-throw policy is highly unjustifiable and shall be fought tooth and nail, he said.

Lamenting that the unemployment rate in J&K had become the highest in the country, Singh urged the Lt Governor to personally intervene in the matter.