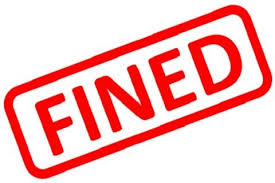 The officers of the department inspected number of establishments at Wave Mall Jammu for ensuring compliance of the Act in respect of mandatory declarations which are required for information of the consumers such as MRP, Packing date, Net wt., address of the manufacturer/packer and consumer Helpline number etc. Three offenders were booked for not displaying MRP and other violations.

During the month, the department also fined one petrol pump for short delivery, one Gas agency for overcharging, brick Kilns for short measured bricks and other trades at Bahu Plaza, R.S Pura, Kunjwani, Sunjuwan and other adjoining areas. A sum of Rs 2.17 lakh has been recovered by Deputy Controller Consumer Protection Jammu from 13 defaulters and other cases are on notices.

Pertinently, LMD has conducted 782 inspections and booked 120 cases recovering an amount of Rs. 10.46 lakh during current financial year, so far.

The department appealed the general public to be more vigilant while making purchases and bills must be preserved for settlement of their claims in future.