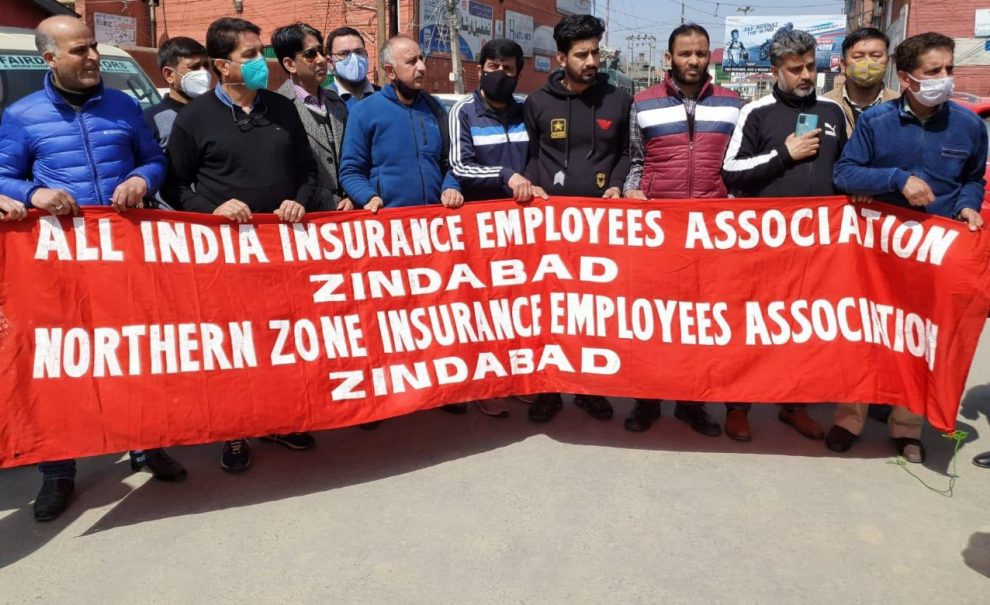 Srinagar, Mar 18: The employees of Life Insurance Corporation Srinagar Division on Thursday staged a protest at press colony Srinagar, opposing the initial public offer (IPO) of the LIC and increase in the Foreign Direct Investment in the LIC of India.

According to the news agency Arshad Hussain, general secretary All India Life Insurance Corporation Federation Srinagar Division told reporters that they strongly oppose the IPO in LIC and foreign direct investment of 74 per cent.

“The government has opened the doors for FDI to take out the assets that have taken the shape over the past 70 years and majorly all government projects are being financed by the LIC of India. We want to protect the people’s money and we will not let this happen,” he said.

He said that this is the money of orphans and widows and these multi-national companies do not have any human consideration as they simply come with profit motive. “They do not have any criteria whether people will die or live. We want to protect that, and we will protect that. Today we are on strike and tomorrow we will find another way to press for our demands,” he said.

He said that the joint front will lead the demonstration and strongly oppose the government’s move and will not let this happen.

“Things can be approved in parliament but that doesn’t mean they are right. We will continue to oppose this and one day we will succeed in telling the people and this will be a mass mobilized effort and when the people will be able to realized, we will definitely be able to challenge and defeat it,” he said