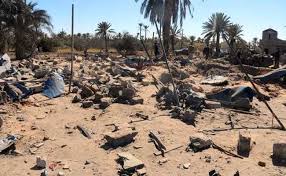 At least two civilians were killed and eight others suffered injuries on Thursday in an airstrike by the Libyan National Army (LNA) forces-led by military commander Khalifa Haftar, according to local hospital officials.

According to Anadolu News Agency, Jets loyal to military commander Khalifa Haftar bombed Az-Zawiyah city.On Dec 12, Haftar announced that he had ordered his militants to launch a “decisive battle” to capture the city of Az-Zawiyah.
Libya has been largely divided into two factions ever since the death of its dictator Muammar Gaddafi.

The LNA-backed parliament controls the east of Libya, while the UN-backed interim Government of National Accord (GNA) governs Libya’s western region from Tripoli.While the US government has primarily backed the GNA, American diplomats and military officers have maintained contacts with Russia backed Haftar.

Most of the international community has urged for a peaceful resolution to the intense fighting which has ensued in the African nation.