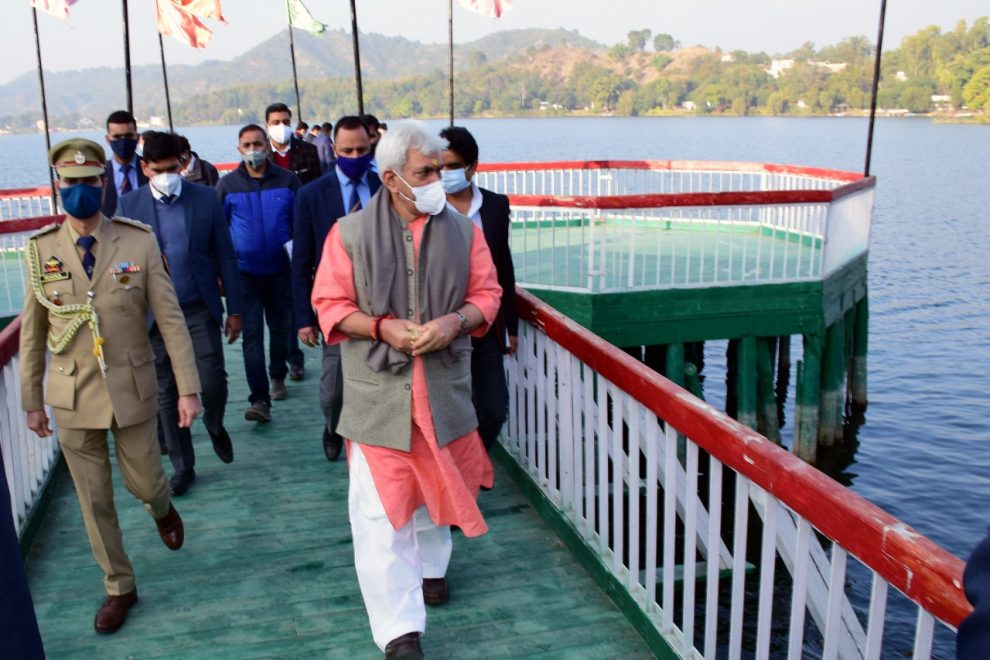 Jammu: Advocating for promotion of pilgrimage tourism, Jammu and Kashmir Lieutenant Governor Manoj Sinha on Tuesday expressed unhappiness over development of Surinsar Lake and directed for its immediate maintenance.
Surinsar Lake, some 35-kilometres from Jammu city, has a religious importance and one of the famous water bodies to attract tourists. Recently, boating was also introduced into the Lake by the Jammu Tourism Department.
Reliable sources here told UNI, “on seeing weeding and silt in Surinsar Lake, the LG was not happy and directed for its immediate cleanliness.”
Mr Sinha asked the Surinsar-Mansar Development Authority (SMDA) to carry out de-silting and de-weeding in the Lake at the earliest as in view of the Winter Season, tourists footfall is expected to rise ahead.
The LG on Tuesday was on a day-long tour to Samba district and visited Purmandal, Utterbehni and Surinsar areas.
However, some locals also alleged on his visit that the funds allocated were not utilised in the maintenance of Surinsar lake.
Sources further said that at Purmandal, local residents apprised the LG of the religious importance of the place.
They said that in Jammu region including Purmandal, record numbers of religious visitors come throughout the year but the place lacks development and has no adequate infrastructure.
“The locals demanded that temples should be brought under an ambit of separate Department of Dharmarth, which was framed during Maharaja’s time to look after the temples and needed to be reconstituted,” they said.
Purmandal is located in Samba district of Jammu region and locally known as ‘Mini Kashi’.
However, the LG, sources said that have assured all cooperation and a major boost to pilgrimage and religious tourism in coming days.