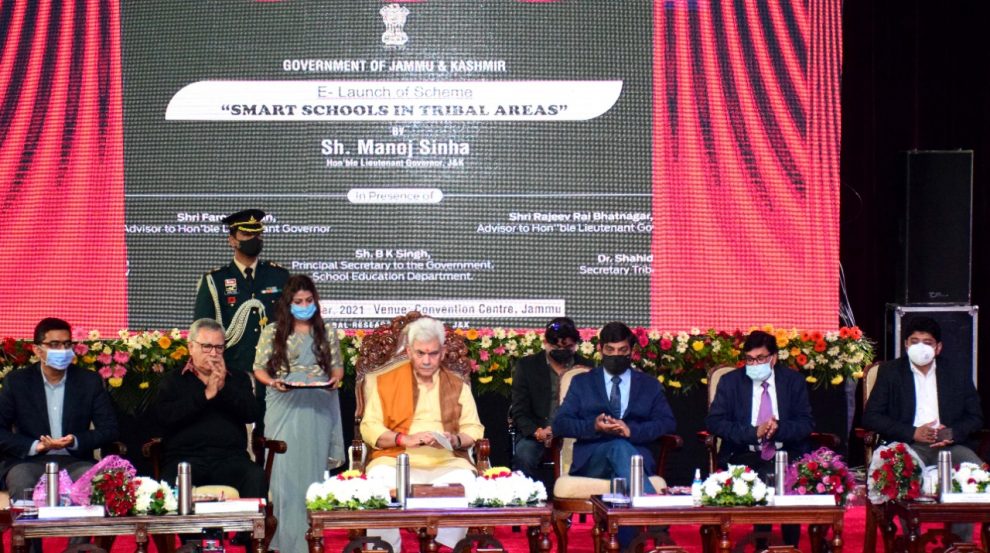 On the occasion, the Lt Governor announced another major decision of the government to provide scholarships to 21,000 children of Gaddi, Sippi,  Dard, Sheena communities who were deprived of the same for the last 3 decades.

“In 1991, the Gaddi, Sippi community was declared tribal but their children were denied a scholarship. For three decades they kept approaching governments, but no decision was taken. This issue was brought to my notice just a few days back and we immediately decided that scholarships will be provided to the 21,000 children of Gaddi, Sippi, Dard, Sheena communities”, he added.

In his address, the Lt Governor congratulated the Tribal communities and the concerned administrative departments for the historic beginning of the new era of educational empowerment of Tribals in J&K.

“Our priority is to secure the future of tribal children. Smart schools in tribal & remote areas equipped with modern facilities will develop scientific temper in children and make them future ready, besides arresting the drop-out rate”, said the Lt Governor

The UT government has formulated a visionary framework for the functioning of the Smart Schools. Members of the Tribal communities, PRI representatives, and the people associated with voluntary organizations will be involved in the management so that these schools could perform the role of ‘changemakers’ in our society, observed the Lt Governor.

“Lives are changed when people connect. Life is changed when everything is connected. Tribal Education Plan, Scholarships, Smart Schools will do justice to tribal communities in J&K who were neglected for decades”, the Lt Governor noted.

These groundbreaking initiatives will also ensure that the members of the tribal communities can keep pace with the revolutionary and rapid changes happening around them and connect themselves to the world, he added.

The Lt Governor expressed gratitude to the Hon’ble Prime Minister Shri Narendra Modi Ji for awakening the self-confidence of the tribal community.

The Lt Governor highlighted that J&K administration is collectively spending around Rs 104 crore to strengthen school infrastructure in tribal areas and establish a strong educational eco-system for the tribal community. Besides Smart schools, we are also spending Rs 8.50 crore on the modernization of hostels of the Tribal Department and Rs 04 crore will be given for the new hostels being built. In July, the UT administration had decided that two Eklavya Model Schools would be opened in Rajouri, one each in Anantnag, Poonch, Kulgam and Bandipora and Rs 21.25 crore is being given for this. Apart from this, Rs 30 crore is being given for scholarship, he added.

The Lt Governor observed that educational reforms catering to the needs of the future have the power to change the socio-economic situation.

By developing a better infrastructure, and through training and capacity building programs for teachers and students especially in tribal areas, I am certain that we will address the issues of Gross Enrollment Ratio and Drop-out rate, the Lt Governor said.

On the occasion, the Lt Governor also appealed the parents to make it a priority to send their children to school. It is our moral responsibility to provide the best opportunities and means to make our children educated and skilled, he added.

Sh Farooq Khan, Advisor to the Lt Governor while addressing the gathering, congratulated the School Education Department and the members of Tribal Communities on the launch of smart schools. He also highlighted several activities being undertaken in various sectors including education, health and others for the socio-economic development of tribal population.

Dr Arun Kumar Mehta, Chief Secretary, while speaking on the occasion termed the launch of transformation of smart schools for tribal children as a great step and impressed upon the teachers for adopting innovative methods to kindle the spark of curiosity among children. He also stressed on making a complete database of tribal children, besides sustained capacity building of teachers.

Earlier, Sh. B K Singh, Administrative Secretary, School Education, said that the Smart Schools will mark the beginning of the digital revolution for the tribal population. He also gave a brief overview about the overall education scenario in J&K to the gathering.

Dr. Shahid Iqbal Choudhary, Administrative Secretary, Tribal Affairs Department expressed gratitude to the Lt Governor for announcing the scholarship for children of tribal communities. He also informed about the workshop being organized on the occasion for awareness on various schemes of the government.

The Dispatch is present across a number of social media platforms. Subscribe to our YouTube channel for exciting videos; join us on Facebook, Intagram and Twitter for quick updates and discussions. We are also available on the Telegram. Follow us on Pinterest for thousands of pictures and graphics. We care to respond to text messages on WhatsApp at 8082480136 [No calls accepted]. To contribute an article or pitch a story idea, write to us at [email protected] |Click to know more about The Dispatch, our standards and policies
Tags#thedispatch #TribalAffairs

Those killed in Hyderpora gunfight not innocents, have strong evidences against them: DGP Dilbagh Singh
DGP sanctions welfare relief of Rs. 5.25 lakh in favour of retired Policemen & NoKs of martyred, deceased personnel
Comment