While urging the people of Jammu to take care of the assets in Jammu city clean. As per The Dispatch, the LG Sinha said that every city across the world has a slogan and that he has two choosen two for Jammu city— “Jammu, a city of bliss or Eternal, Spiritual City on the Earth.”

He said that the project has been constructed at the cost of Rs 213 crores that has a terminal of 80 big busses and has a space for 1112 four wheelers and over 1000 two wheelers.

“The building has X-ray system for baggage, parking management, rain harvesting, CCTVs for security,” he said. He said that most of the work was completed on the project in the past two and a half years.

“Jammu is a place that takes one’s heart away. Every single resident of this place contribute towards the development of the city,” the LG Sinha said adding that at present 33 percent people live in cities and in next few year it would be 42 per cent and after a decade 65 per cent people will live in cities. “So we need to have an eye on the future while addressing present issues,” he said. “Jammu is the only place across the country where we have IIM, AIMS and IIT.” He said a feeling must coming in the minds of people that “it is my city.”

He advocated “street festival” for the people of Jammu once a month that should be organized by the Jammu Development Authority (JDA).  He said that commercial complex of the building is yet to be made functional but will be soon be operational. 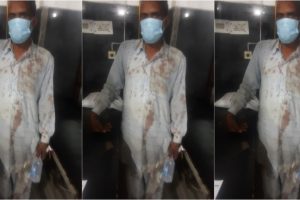 2 Gujjar men beaten to pulp by hooligans in Jammu

Despite lockdown, Srinagar records over 9000 cases in 9 days