Posted by The Dispatch on Wednesday, December 4, 2019

Baramulla, December 4: Lieutenant Governor, Girish Chandra Murmu today said that the synergy and coordination between Police and Civil Administration is vital for the development in Jammu and Kashmir, asserting that Police was performing yeoman’s service ensuring safety and security of the people. 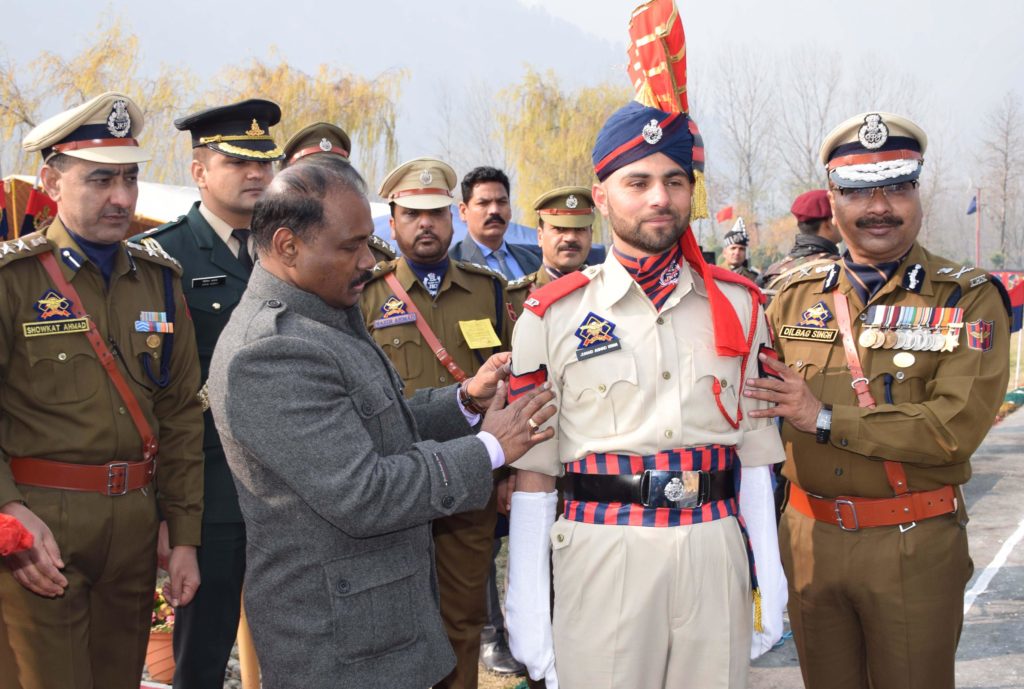 “Jammu and Kashmir being one of the oldest forces of the nation has faced all the challenges very boldly and they have ensured peaceful environment in the region,” the Lt. Governor said, generating applause from the cadets. The Lt. Governor lauded the role of Police and Civil Administration for their services during Government’s ambitious Back to Village Programmes which aim to provide governance at the people’s doorsteps.

The Lt. Governor stressed the importance of greater synergy between Police and Civil Administration to provide hassle-free services to the people and help the Government to realize the dream of development in Jammu and Kashmir.

He observed that the Police and Paramilitary forces have remained on the forefront to ensure smooth conduct of activities like Panchayat elections, BDC polls and Back to Village Programmes. He said it is good to learn that the people are coming out and helping the Government in the developmental process.

The Lt. Governor said, besides ensuring law and order in the region, the Jammu and Kashmir Police has a greater role to play in implementing the fruitful welfare schemes and programmes of the Government with utmost devotion and dedication in an accelerated manner.

Urging the Police Department to ensure that people’s grievances are addressed on priority, the Lt. Governor said that ‘People-friendly Policing’ is call of the day which will yield greater results in ensuring the law and order, peace and tranquility in the region.

“This is a historical event. From today, you (Passing out cadets) will be joining the mainstream police ranks and playing your roles in safeguarding the interests of the nation,” the Lt. Governor said.

He complimented Jammu and Kashmir Police for organizing the training and parade successfully. He said that it was heartening to note that Police was conducting all its recruitment process though a Transparent Recruitment Process (TRP) and the education profile of the passing out recruit constables was also encouraging. He advised the trainee cadets to serve the public with utmost devotion and dedication and wished them success for the future.

On Developmental Projects, the Lt. Governor urged people to avail the developmental schemes of the Government. He said that several projects have been listed as “Languishing”, assuring that the administration was taking every possible step to clear all such projects for the welfare of Jammu and Kashmir. He said that around 2500 projects were reviewed out of which around 1000 projects are going to be completed sooner.

Earlier, the Lt. Governor inspected the Parade and took the salute. Nearly 950 trainee constables passed out after completing their basic recruit training.

In his welcome speech, Director General of Police, Dilbag Singh hailed the government, especially the Lt. Governor, for taking keen interest in Police welfare. Addressing the pass-outs, the DGP complimented them for undergoing nine-month rigorous training successfully.  He said that with their joining the Jammu and Kashmir Police would become stronger and hoped that the passing out cadets will work for the nation with dedication. He congratulated the award-winning cadets and also the families and relatives of passing out trainees.

The Principal of the STC, Showkat Ahmad Dar, highlighted the profile of the new recruits and also gave a brief about the pieces of training conducted for them.