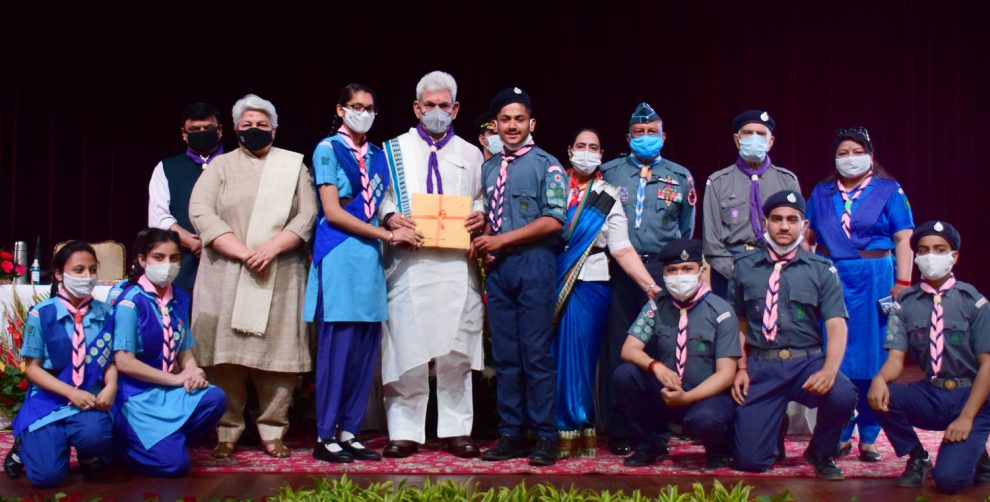 He called upon the youth to follow Pandit Madan Mohan Malaviya’s ideals of selfless service to mankind, character building, AtmaNirbharta, and asked them to play their important part in nation building.

On the occasion, the Lt Governor announced that the J&K Bharat Scouts & Guides will get an annual Grant-in-Aid to the tune of Rs 20 lakh from now on, which is double the amount of the previous grants.

The Lt Governor directed the concerned Deputy Commissioners to complete the process of identification and allotment of the land for establishing two Training Centres of J&K Bharat Scouts & Guides, one each in Jammu and Srinagar, as soon as possible.

In order to facilitate the smooth functioning of the organization, the Education department is also being pitched in with financial support, he added.

During his address, the Lt Governor, who is also the Chief Patron of Jammu & Kashmir Bharat Scouts & Guides, lauded the cadets, trainers, officials and every individual associated with the Scouts and Guides movement for working at the forefront during COVID pandemic; in environment protection programmes, Blood donation, Disaster Management etc.

Speaking on the founding principles of Bharat Scouts & Guides, the Lt Governor observed that Pandit Madan Mohan Malaviya, who was a great educationist, reformer and founder of the Banaras Hindu University has paved the way for Indian edition of Scouts and Guides in 1918.

At that time, Mahamana along with volunteers managed the heavy rush of people during Magh mela in Prayagraj. He also established Sewa Samiti society, by involving school students for selflessly serving the society.

“We must take inspirations from Pandit Mohan Malaviya ji, and put our efforts towards the character building of the youth, which is the foundation of Bharat Scouts & Guides”, observed the Lt Governor.

Bharat Scouts & Guides is keeping forward the principles of Unity in Diversity, Character building, environment protection, compassion, and Vasudhaiva Kutumbakam, which also finds a high place in its training modules. These are the values which gave a different identity to the organization, he maintained.

The Lt Governor lauded the Bharat Scouts & Guides organization for imbibing the spirit of AtmaNirbharta and selfless service in its cadets, and termed its role as important in effective implementation of New Education Policy.

Bharat Scouts and Guides is the best platform for developing individuality. It promotes competitiveness within, which goes a long way in knowing one-self, he added.

In view of the ongoing Azaadi ka Amrut Mahotsav celebrations, the Lt Governor asked the J&K Bharat Scouts and Guides to include an awareness programme in the activities of the organization and reach out to the people with the stories of courage and sacrifice of role models like Brigadier Rajinder Singh, Maqbool Sherwani, and Mali – a female member of Gujjar Community who played a significant role in safeguarding the territorial integrity of Poonch.

Later, the Lt Governor handed over a cheque amounting to Rs 50,000 to the organization.

On the occasion, the Badge of Bharat Scouts & Guides was pinned to the Lt Governor. Quarterly magazine of the organization ‘News Reporter’ was also released by the Lt Governor.

Speaking on the occasion, Ms. Nasreen Khan, Administrator, Bharat Scouts & Guides, Jammu Kashmir and Ladakh, expressed gratitude towards the Lt Governor for addressing the long pending issues of the organization.

Sh. ID Soni, Pioneer of Scouts & Guides, highlighted the working and achievements of the organization and also apprised the Lt Governor about various issues of Bharat Scouts & Guides. Wg Cdr, MM Joshi presented the Vote of Thanks.