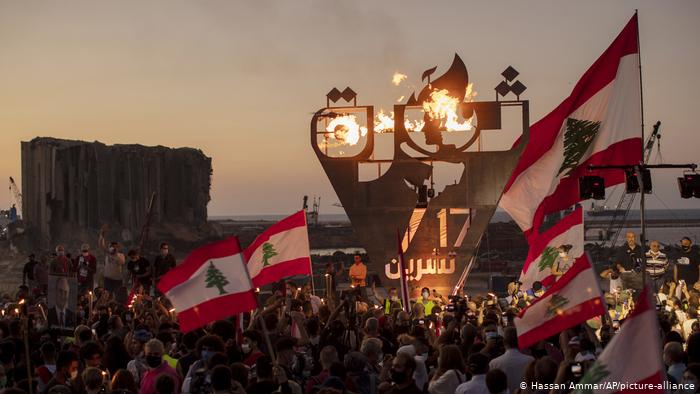 On 22 October, the Lebanese President appointed Saad Hariri as Prime Minister-designate and asked him to form the government after he won 65 votes in the Parliament. After Hariri’s resignation following the anti-government protests in October 2019, this is the third attempt to form a government.

On 17 October, protestors had taken to the streets to mark one year of protests and reiterated that the sectarian political system needs to be overhauled. According to Lebanon’s current political system, the Prime Minister has to be a Sunni Muslim, the President a Maronite Christian, and the Speaker a Shia Muslim.

Protestors’ demand an end to the sectarian system

The main demand of the masses was an end to the sectarian system. The system had resulted in a “client-patronage” system wherein leaders of particular sects catered to the demands of their people. The rivalry between groups created a space for stalling government projects thereby fuelling cronyism and corruption. Further, power was concentrated within a few powerful groups or political elites like the Hariri family. The anti-government demonstrators called for establishing technocratic leaders and a government wherein ministers are appointed based on their competency and experience instead of their sect. In short, the people demanded accountability, economic reforms and access to basic necessities.

Yet, Hariri returns strong as the economic crisis continues

First, the return of Saad Hariri. After his resignation last year, Hassan Diab, a Hezbollah-backed academician was appointed in January 2020. He resigned shortly after the blasts in Beirut in August 2020 citing “deeply-rooted corruption” and an inefficient political system. Mustapha Adib, Diab’s successor, resigned within a month blaming an unbreakable political stalemate, especially by Iran-backed Shiite group Hezbollah, leading to Hariri’s latest stint at forming a government. Previously, he has served as Prime Minister twice.

Second, the worsening of economic conditions. The government announcement of a tax on WhatsApp calls to save the country from economic deterioration sparked the protests last year. However, today the country is deeper into the economic crisis. In March 2020, Diab announced a foreign loan default amounting up to $1.2 billion. The coronavirus pandemic and the Beirut port blast added to the economic collapse. According to the latest UN brief, 55 per cent of the Lebanese population lives in poverty, almost double from 28 per cent in 2019.

The failure of protests to achieve their agenda can be attributed to the following:

First, the lack of sustained protests. After one year of Lebanon’s October Revolution, the country is back to square one. The political system has not changed; Hariri’s return has re-established the status-quo. A major reason behind this is the lack of leadership during the protests. The demonstrations started at the grassroots level but spread across the nation. Yet, no group or individual could lead to an organised uprising. Over the months, the support for the uprising declined and protests waned away, especially during the pandemic. This reiterates that if protests fail to provide coherent governing structures, countries are likely to hit a dead end, anarchy.

Second, Hezbollah’s role in political deadlock. After Hariri’s resignation, the political leaders took three months to appoint a new prime minister. Hezbollah’s push for Diab suggests they wanted to defuse the protests; it worked. Previously, supporters of Hezbollah and its ally Amal attacked protesters in Beirut to disperse the crowds. This is also an attempt to reinstate sectarian identities within the protesters.

Further, Adib faced a backlash when he tried to form a new cabinet. Adib’s efforts to change the power structure were unsuccessful due to the intervention of parties to protect their own interests. For example, Shiite groups that wanted to control the Finance Ministry rejected Adib’s proposal to change the sectarian leadership of the Ministry. Hezbollah and its Shia allies enjoy a majority in the Parliament. Hence, it is a challenge to change the status quo in governance.

Third, the fading silver lining. To give credit to the protests, the last year witnessed some heartening changes. Majority of the population united by cutting across their class and ethnic differences. The resignation of Hariri shook the political elite and gave strength to the demonstrators. Further, the two previous attempts at forming the government kindled hope for change. For example, Diab’s government saw new but experienced faces. His cabinet also created space for women in politics. One reason behind this is Diab’s professional background as an academic. However, these changes were short-lived and dampened the protests.

All is not well for Harini ahead

Hariri’s reappointment has undone the above changes and undermined the protests. His return is a blow to the masses and activists who had been rallying for overhauling the system. However, he has major challenges ahead of him. Mere reappointment as prime minister will not address the political and economic distress that has increased since his resignation. Further, it is unlikely that he will win the support of the masses and the international community. The international donors have emphasised that they will not provide aid to Lebanon unless there is a reformist move. Any failure this time, could destabilise the country and risk a spillover to neighbouring countries.