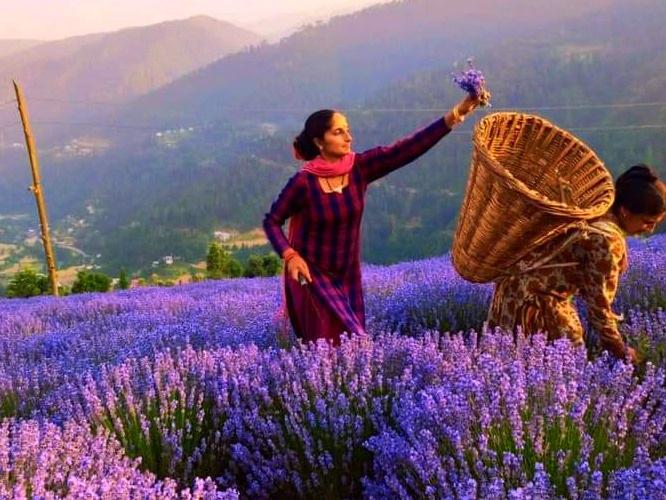 Bhaderwah : Considered as the birthplace of India’s purple revolution, Jammu and Kashmir’s Doda district is likely to witness a major boom in Lavender farming under the ‘one district, one product’ scheme with the government, army and various other institutions coming forward in a big way to boost its production.

The central government has designated Lavender as ‘Doda brand product’ to promote the exotic aromatic plant, bringing cheers to agri startups, entrepreneurs and farmers associated with its cultivation under the Aroma mission.

To help the startups, Bhaderwah-based Rashtriya Rifles unit has sponsored a lavender nursery at Dradhu village and has established a fully-funded lavender by-products unit at Nai-Basti hamlet, where womenfolk are being trained in making soaps, incense sticks, perfume, hand wash and room fresheners to provide ‘value addition’ to the aromatic plant.

CSIR-IIIM (Council of Scientific and Industrial Research- Indian Institute of Integrative Medicine) Jammu has distributed eight lakh saplings among the farmers after ‘one district, one product’ initiative and has set a target to grow another 50 lakh saplings in Bhaderwah by September, for distribution among the farmers under the Aroma Mission two, not only in Doda but also in Reasi, Udhampur, Kathua and Rajouri districts of the Jammu province.

“In the next two to three years, we are expecting a five-fold increase in production, which will surely develop agri-entrepreneurs that will help establish lavender as a brand of Doda in the entire country,” Nodal Scientist CSIR Aroma Mission, Sumit Gairola.

Secondly, he said the initiative will also help in shifting focus of the government and industry towards Lavender and its products in Doda will multiplying the income of local farmers.

Gairola said it will also help boost the tourism sector in Bhaderwah, also known as mini-Kashmir, for its beautiful and mesmerizing landscape.

“I became a laughing stock in my village when I decided to switch from traditional maize growing to lavender farming 10 years back, but after the Union government’s Aroma Mission in 2016, more farmers started growing aromatic plants especially lavender and by 2020, Bhaderwah Valley became popular for starting purple revolution,” national award winning farmer Bharat Bhushan said.

He said he feels proud to be a part of this, as lavender has been declared the brand product of the district.

“NABARD also encouraged and funded us to form an FPO. In a short span of time, 120 progressive lavender farmers have joined Himalayan essential oils and have started raising two dozen nurseries at different locations in Bhaderwah including Dradhu, Nai Basti, Khellani, Lehrote and Neota,” Bhushan said.

National Bank for Agriculture and Rural Development (NABARD) has formed an FPO (Farmer Producer Organization) in Bhaderwah to provide end-to-end support and services to the Lavender farmers, and cover technical services, marketing, processing, and other aspects of cultivation inputs.

To speed up the production of lavender saplings to meet the growing demand, department of agriculture production and farmers welfare has sponsored naturally ventilated semi high-tech poly green houses in and around Bhaderwah, where saplings will be grown scientifically which will eventually help in bringing more area under lavender farming in less time.

Farmers and other stakeholders associated with the production and extraction of oil and other value added products from lavender expressed their gratitude to the Prime Minister Narendra Modi and union minister Jatinder Singh for recognizing their efforts and giving them a unique identification in the form of declaring Doda as Lavender district.

“This will go a long way in not only making the farmers economically self-reliant but also bringing Bhaderwah on the international map of tourism for being known as the birthplace of India’s purple revolution, young entrepreneur from JK Aroma Bhaderwah, Touqeer Bagwan said.