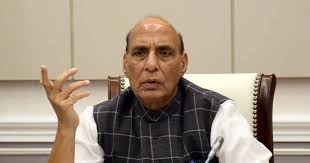 Defence Minister Rajnath Singh today said, the last six years provide a blueprint for India’s approach towards national security over the next decade.

He said, the first is the ability to secure India’s territorial integrity and sovereignty from external threats and internal challenges.

This includes development of areas affected by terrorism along with the provision of justice to the aggrieved.

It also includes the ability and desire to go more than half way to negotiate settlements with dissatisfied groups to enable a political settlement.

He said India is also willing to challenge status quo, if the status quo becomes a tool for the exploitation of helpless citizens and the provisions of governance.

This is the essence of country’s initiative to be a part of the Indo-Pacific initiative.

Highlighting India’s ancient civilization, Mr Singh said, the culture and traditions have been influenced by deep commitment towards peace and welfare.

Mr Singh said , it is the defence of this idea of India that represents the core of country’s approach to national security