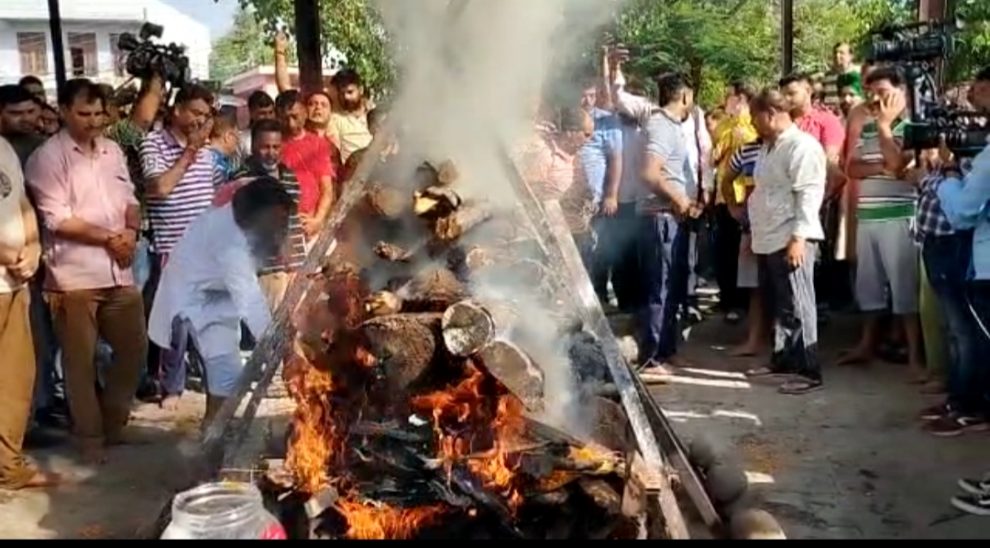 The Dispatch Staff
Add Comment
The last rites of the Kashmiri Pandit, a government employee who was shot dead by terrorists in Jammu and Kashmir’s Budgam district, a day ago were performed at Bantalab here on Friday

JAMMU: The last rites of the Kashmiri Pandit, a government employee who was shot dead by terrorists in Jammu and Kashmir’s Budgam district, a day ago were performed at Bantalab here on Friday.
ADGP Jammu Mukesh Singh, Divisional Commissioner Ramesh Kumar, and Deputy Commissioner Avny Lavasa were present at the cremation ground for the last rites.
Bhatt an employee of Chadoora Tehsil office was shot at by terrorists, in what appeared to be a targeted killing, at the Tehsil office in Budgam yesterday. He was brought to Srinagar’s SMHS hospital where he was  declared dead.
People gathered today to participate in Bhatt’s last rites.
Locals expressed their anger over the killing and demanded security for the Kashmiri Hindus living in the Valley.
One local said, “Kashmiri Pandits should be given shelter at one place and jobs should be given in the nearby areas along with security. Only then they will remain safe. It is naturally a targeted killing. Barging inside the office and looking out for him is a targeted killing. This is being done to stop them from returning to Kashmir again.”
Another local Rakesh Bhatt, who was present at the cremation ground said that the Kashmiri Hindus should not be sent back to Kashmir and should rather be sheltered in Jammu safe camps.

“The entire community is in shock after the targeted killing. The employees should not be sent back to Kashmir, they should come to Jammu in the safe camps. Till the terrorists’ slogan doesn’t finish, the Kashmiri Hindus should not return to Kashmir. Even if they return, they should be given security,” he said.
On Thursday, Jammu and Kashmir Lieutenant Governor Manoj Sinha condemned the “barbaric killing”.
“I strongly condemn the barbaric killing of Rahul Bhat by terrorists at Budgam. Those behind this despicable terror attack will not go unpunished. J-K government stands in solidarity with the bereaved family in this hour of grief”, the Office of the Jammu and Kashmir Lieutenant Governor said in a statement.
The Jammu and Kashmir police said that preliminary investigation revealed that two terrorists were involved in the heinous crime and have used pistols for committing the crime.