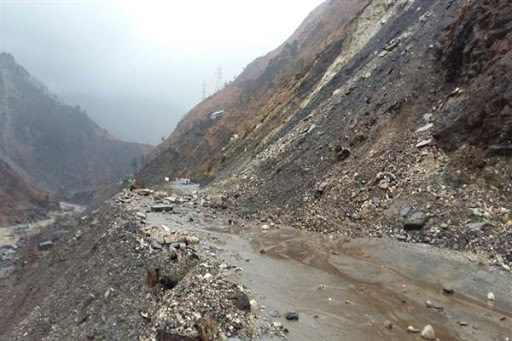 Jammu, Aug 21: The 300-km long stretch of Jammu and Kashmir on Friday closed due to landslides triggered after fresh landslides while the MeT department has also predicted fresh spell of rains while alert has been sounded in parts of the Union Territory.

The Jammu-Srinagar National Highway (NH44) has been blocked due to shooting stones and landslides between Ramban and Ramsu.

“Due to fresh landslides, road has been blocked while teams of police, BRO men are on job to clear the highway,” an official here said.

He said that the overnight rainfall has aggravated the situation due to which the shooting stones have blocked the road at Panthial,Trishul Mod, Marog, Monkey Mod, Iron Shed Digdol, Anokhy Fall and Battery Chashma.

However, weatherman have also predicted two day wet spell from Friday and said that the rainfall likely to generate flash floods and landslides at vulnerable spots of J&K.

Authorities have also sounded flood alert in Udhampur and Jammu districts following heavy rains and increase in water level in the water bodies.

“We have sounded alert as a precautionary measure after the Flood Control Department conveyed to us about the rise in river water due to rains,” Kulbir Singh, SSP Police Control Room Jammu here told UNI.

He said that in view of prevailing weather conditions, the alert warning will remain in place.

Meanwhile, an official said that authorities will also make announcements to alert the people so that they remain away from the water bodies.