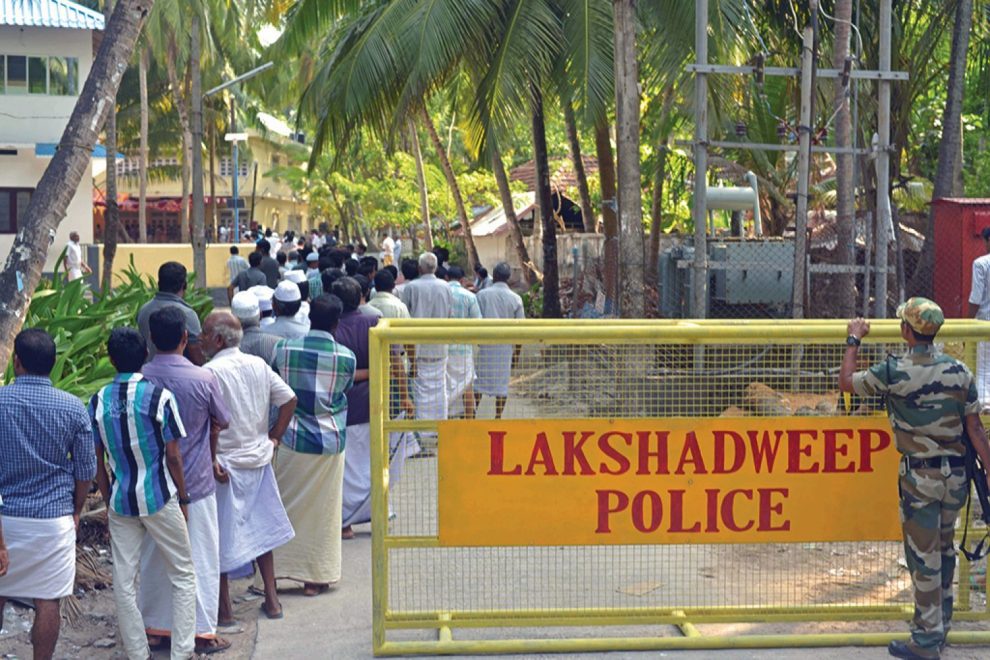 Kerala Legislative Assembly unanimously passed a resolution expressing solidarity with the  people of Lakshadweep against the Union Territory Administration and calling on the Centre to recall Administrator Praful K. Patel and take immediate steps to protect the lives and livelihood of the islanders. Development of a small UT standing isolated from the mainland, which would have gone unnoticed a few years back, has now made front page news.

Any issue or event is quickly turning into political in India as political consciousness is growing fast perhaps due to constant elections and extremely active “Opposition parties” watching for opportunities. In the process,  limits of powers  and authority  of different organs and at  different levels   are  forgotten and violated.

The issue dividing interested people and opinion makers pertains to the draft Lakshadweep Development Authority Regulation 2021 (LDAR) and the Prevention of Anti-Social Activities Act (PASA) introduced by the Lakshadweep Administrator with the main aim of promoting the UT as a “renowned international  tourist  destination”. The Regulations supersede all existing regulations and  vest unrestricted powers with the Administrator  for development of the UT and prevention of crimes.

On both accounts, Lakshadweep is very different from other States. PASA proposes to vest immense powers with the Administrator for prevention of crimes though recorded crime rate does not show need for such powers. It is contended that the changes are proposed without consulting local residents or their representatives or panchayat. The proposals have been sent to the Ministry of Home Affairs for approval.

Opposition spreading like wildfire, “Save Lakshadweep” campaign is gaining momentum to  block the changes and restore original status. A hidden agenda is suspected to lie behind these drastic reforms. Kavaratti village panchayat passed a resolution protesting against what it calls   “unconstitutional, undemocratic, and  unscientific” reforms introduced by the Administration.

A petition was filed by a Congress leader in Kerala High Court challenging LDAR and PASA on the ground that Lakshadweep Administrator was illegally interfering in the “social, political, and cultural realities” of the islands. The court refused to stay their implementation. Many Opposition parties in Kerala allege that the “authoritarian rule of Lakshadweep’s new Administrator …is causing unrest in the island”.

Development of remote areas separated from the mainland of a nation by history, geography,  and also socially, economically and culturally is not a smooth affair for any country. Any change is taboo for some while status quo unfair and unacceptable.

LDAR primarily aims at holistic development and particularly that of tourism in the island for which there is tremendous scope. Lakshadweep Development Authority was created recently with extensive powers including the right to evict land owners. Orderly and progressive development of land in urban and rural areas, grant of permission to develop land have been envisaged. The Regulation empowers the Administrator to constitute Planning and Development Authorities (PDAs) with government-appointed chairman and experts.

There is opposition to the proposal to construct a highway or tram-way in the island which would change the ecologically fragile environment. Mining and exploitation of mineral resources is proposed to promote cement manufacture. Fishing rights have been curtailed for the sake of  coast guard. On the social side, ban on cow slaughter and buying, selling, transportation or storing beef or beef products in any form, introduction of preventive detention law, and imposing two-child norm for contesting panchayat elections are proposed.

Critics point out that the LDAR 2021 would  “destroy the delicate eco-system of the coral isles  and the lives and livelihood of the islanders”. Indiscriminate promotion of tourism and various projects for “development” were opposed as destructive of the life of the people. Maldives   Model of tourism development, cited by Patel, is not acceptable to some sections of nature conservationists.

Lakshadweep is an archipelago of 36 islands built by corals and surrounded by the Arabian Sea  with only 10 of them inhabited. It extends to just 32  sq.km and is situated 220 to 440 km away from Kochi in Kerala. It has a population of 64,000 by 2011 census. Interestingly, there is no aboriginal inhabitant found in the islands as in Andaman and Nicobar. The SC and ST List of  1956 has identified inhabitants of Lakshadweep as STs. There are no SCs in Lakshadweep.  Malayalam, the language spoken in the nearest mainland Kerala is the principal language  spoken here. Total literacy is a special attribute.

The islands have political links with Kerala tracing its first settlement back to the period of a  Chera king in Kerala who converted to Islam. By 7th century, Islamisation was almost completed  in the islands. The arrival of Portuguese and establishment of its dominance increased the importance of the islands then known as Laccadives. The islands then passed on to the British rule. In 1912, the British made Lakshadweep Regulation, which conferred limited power of  judicial and magisterial status to Amins/Karamis of the islands. The Regulation restricted entry of “outsiders” into the islands which tightened exclusion of these islands from the mainland India.

Laccadive, Minicoy, and Amindivi Islands were part of Madras Presidency in 1949 and became a UT under the Indian Constitution in 1956  under the same name. It  was a Scheduled Area.   Parliament had the legislative power to make Regulations. The Administrator appointed by the President under Article 239 of the Constitution has power to make regulations for “peace, progress, and good governance” which overrides the legislative power of Parliament. He can repeal or amend any Act presently applicable to Lakshadweep. The collective name  Lakshadweep was adopted for these islands in 1973 and mainland laws have been extended to it since 1965.

Governing Remote Territories is not uncommon, but requires special provisions in any country.  There are seven remote Australian Territories far away from the mainland located thousands of   km in the pacific, Indian, and Southern Oceans and the Coral Sea extending from Antarctica to Equator. These External Territories with a few exceptions are governed by Federal Departments, but are free to legislate on subjects concerning their citizens. Financially and constitutionally subordinate to the Federal Government, they have no powers with regard to subjects of national importance.

Northern Canada, Alaska, Scandinavia, and Micronesia have external territories under their rule.   Annual meetings of Western Regional Science Association (WRSA) have since 1984 provides   an international forum for exchange of information and ideas in development processes and problems of remote regions.

Lakshadweep is important for India’s security. Its  proximity to littoral States such as Maldives and Sri Lanka is a critical factor. Its situation in the Arabian Sea is crucial to safeguard India’s vital shipping lanes to the Middle East and for other security interests. In the wake of terror  attacks in Mumbai in 2008, the importance of safeguarding this remote UT increased.

The strategic significance of these islands for the security of India is far more important than written principles of federalism. Development of this island UT is not a matter for political disputes or even discussions, but a concern of the nation to be handled by administrative, defence, ecological and other experts keeping the interests of the country as the focus while safeguarding those of the local residents.