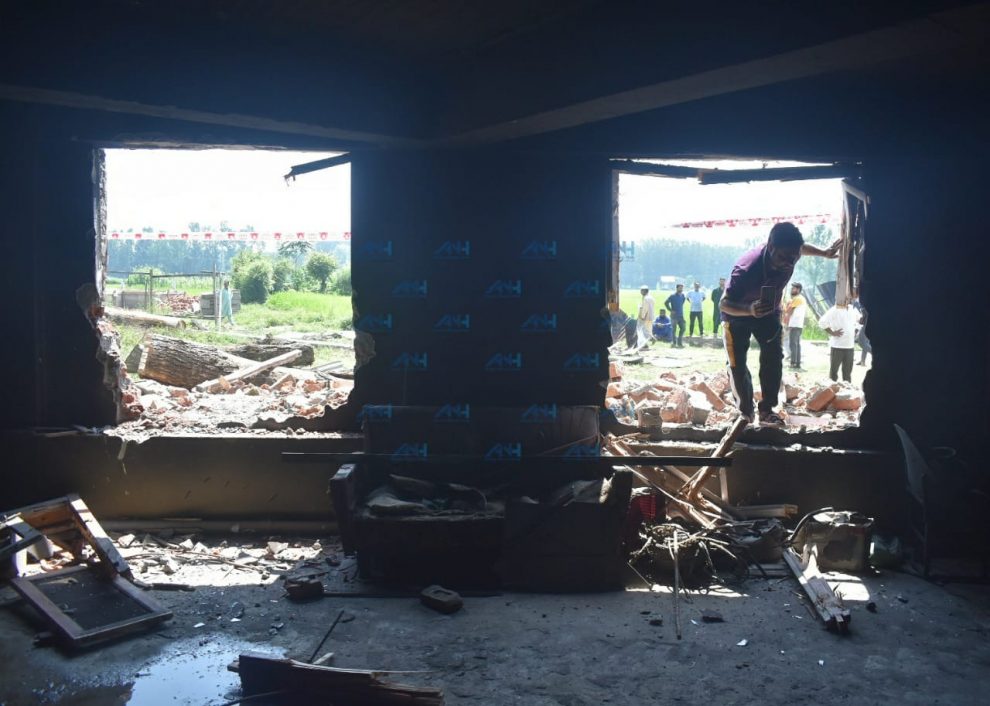 SRINAGAR: A foreign militant of Lashkar-e-Toiba outfit was killed in an overnight encounter at Malpora, Mir Bazarea of Southern district of Kulgam while his associate managed to flee after an initial shootout, police said Friday.

A police official told that two Lashkar-e-Toiba militants attacked the BSF convoy at Malpora on Thursday late afternoon after which they were cornered. “The militants took refuge in a nearby building. One militant managed to flee from the spot after initial, firing,” the official said. “The intermittent exchange of fire remained on and in the wee hours on Friday, one militant body was recovered from the encounter site.”

Talking to reporters in Srinagar, IGP Kashmir Vijay Kumar said that soon after two militants attacked the BSF convoy, they were chased after which they took shelter in a nearby concrete building at Mir Bazar area on the highway. “We used rockets to eliminate the militants. In the morning, during searches, we found one militant body as another one had managed to flee. We recovered a large number of arms and ammunition that includes Rocket Launchers, RPGs, grenades and Ak-47 rifle,” the IGP said, adding that the militants were planning a big strike on the highway ahead of Independence Day.

“The slain militant has been identified as Usman, a resident of Pakistan, who was affiliated with LeT. He has been active for the past six months,” the IGP said.

A police spokesman in a statement said that on Thursday, a BSF convoy moving on NH-44 was attacked by militants near Malpora crossing, Kulgam. “However, swift, effective and immediate retaliatory actions by the CRPF and JKP deployed on NHW not only thwarted the attack but also saved the precious lives of security personnel & civilians. The militants got trapped in a nearby building,” the spokesman said, adding that, “A strong team of Army and senior officers of Police, Army and CRPF immediately reached the encounter site. IGP Kashmir and GoC Victor force also reached the site and assessed the situation on ground and supervised the operation till late night.”

The police spokesman said, keeping in view the huge and concrete structure of the building and to minimize the collateral damage, drones were pressed in for monitoring the movement of militants hiding inside. “During this exercise, two drones got destroyed,” the spokesman said, adding that “In the ensuing encounter, joint teams of Kulgam Police, Army and CRPF successfully neutralised a foreign militant identified as Usman of Pakistan, affiliated with LeT.”

The police spokesman said that arms and ammunition, including RPG Launcher-01, RPG rounds-04, AK series rifle-01, AK magazines-03 and two grenades were recovered from the site of the encounter. “Pertinently, after a long time militants have used an RPG,” he said. “In operation, two security force personnel received injuries, whereas two civilians were also injured far away from the site by stray projectiles. The joint team also safely evacuated 22 civilians including shopkeepers, elderly, women and children.”

The police spokesman said that preliminary investigations, recoveries and the manner of engagement by the militant suggest that the attack was pre-planned and intended to inflict considerable damage to the security forces to disrupt scheduled functions ahead of 15th August and spread fear amongst the general public. “However, the joint teams of Police/SFs were successful in defeating the evil plans of militants and averted a major tragedy before the Independence Day,” the spokesman said—(KNO)