Tazkira Sadat-i-Simanania, compiled by 13th-century scholar and poet Swaleh Reshi, gives the name of place as “Shampora”. Syed Hussain Simnani later renamed it “Kulgam” (kul for ‘clan’ and gam for ‘village’ in Sanskrit). Simnani is said to have invited Hazrat Amir Kabir Mir Hamdani to Kashmir with poets including Sheikh Noor-ud-din Noorani and Lal Ded.

The form of administration from Shair Shah Suri’s reign led to creation of a Tehsil during Mughal Rule, through the aegis of Sheikh Hamza Makhdoom. This had jurisdiction encompassing Doru, Banihal, Gulabgarh, and Shopian. After time, constituent units including Pulwama, Shopian, and Reasi attained the status of district.

The area had been a hunting place for Mughal emperors and Dogra rulers, especially for Shahanshah Shah Jehan, who laid the Chinarbagh,and Maharaja Hari Singh, who discovered the virgin potential of sanctuary at Kutbal. The District is the birthplace of Sheikh Noor-ud-din Noorani, the founder of the Rishi order, and of the forefathers of Allama Iqbal and Jawaharlal Nehru.

Kulgam is located at 33°38’24” N 75°01’12” E. It has an average elevation of 1739 metres (5705 feet). Now it has become a separate district of Jammu and Kashmir. Kulgam is known for a religious saint (Sayed Simnan Sahib), who gave it the name “Kulgam” (“Kul” means “clan” in Sanskrit; “gram” in Sanskrit means “village”), because he lost something in the stream. Syed Simnan came from a place called Simnan in Iran. Travelling in the Kashmir valley, he came to Kulgam and liked the spot on a cliff overlooking the river Veshaw. He made Kulgam his permanent abode and was buried at the very spot which he had found fascinating. His ‘aastan’ is a draw from the population in and around Kulgam. The family of Syed Simnan is buried in a nearby village called Amun. Both the shrines have a masonry plinth and a wooden superstructure of deodars. He was known for his mystical powers and had devotees amongst Muslims as well as Hindus.

Shaikh Nur-ud-din also known as Nund Rishi, was a Kashmiri saint who belonged to the Rishi order and is also called Alamdar-e-Kashmir. Sheikh-ul-Alam as the patron saint of Kashmiris, revered by both Muslims and Hindus, was also born in a village called Kaimuh of the Kulgam distinct in 779 A.H. (AD 1377). The family of Shaikh Nur-ud-din is buried in Kaimuh. The Kulgam area is the birthplace of the ancestors of Allama Iqball (Supur village). Pandit Jawhar Lal Nehrus ancestors also are from Nadi Marag, a village in Kulgam. Ahrabal is a tourist spot in the district of Kulgam. It is a high waterfall, which is a source of the river Veshaw. Kulgam is known as the rice bowl of the valley and is known for its variety of fruit, especially apples.

This town is on the bank of river Veshaw across the spread of which are the foothills of the Pir Panchal mountains. Ahrabal has meadows and a waterfall. It has its origin from a spring called Kounser Naag located in the mountain range of peer panjaal.

Kulgam was in the news regarding the recent  excavation of a new archaeological site in a nearby village called Kutbal which has yielded signs of having been home to a first-century civilization as some artifacts belonging to the period of Kushana kings appeared in Kulgam district. The plateau of Kutbal was once considered a scenic city in the Kushan period. The stamped tiles, which were excavated from the site, indicated the taste and living standard of the people of first century AD.These excavations speak of high culture, civic sense, social norms and art of the people living in first century AD. 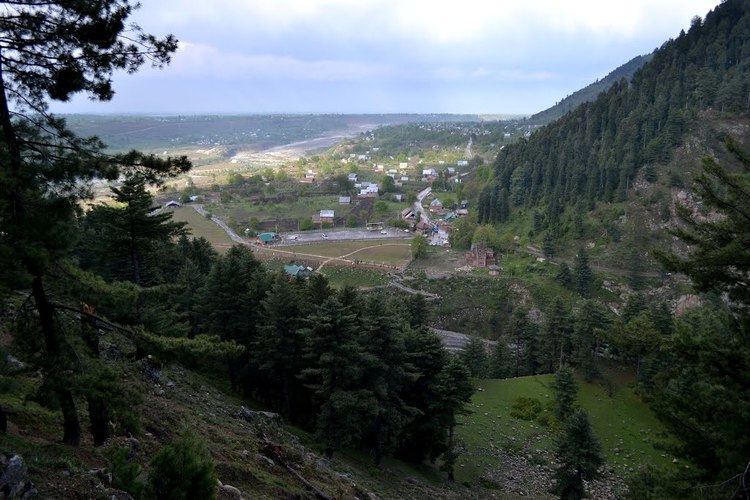 The Kutbal site and its findings, which belong to the Kushana period, are more significant in view of several religious and artistic practices that had flourished then and had travelled to far off places in the subcontinent. Further excavation has been stopped due to prevailing political unrest in valley and is believed that further findings will reveal magnificent history of Kashmir. 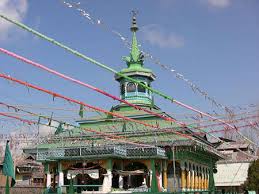 The old Kulgam is situated on the banks of “Kaval”. The topography of Kulgam is. The lower portion is situated on the banks of Kaval, offshoot of river Vashiv. Almost all offices are functioning in this area. A scenic nullaha Vashiv irrigates the fertile lands of Kulgam area. Kulgam is called the granery of Kashmir Vally, but unfortunately this area is almost converted into agriculture to horticulture. Kulgam is famous being the first seat of missionaries of Islam as before Hazrat Sayeed Ali Hamdani, he sent Sayeed Mohmmad Hussain SImnani to Kashmir to preach for Islam. Sayeed Simnani chose Kulgam as a permanent seat. It is the place where Salar Sanz father of Sheikh Noor-ud-Din wali embraced Islam and was renamed Salar ud-din, Salar resides at Khee Jogipora Mohmad pora 7 kilometres (4 mi) from Kulgam and was married to Sadder, a daughter of Kota rajas of Daderkot. It was due to the efforts of sayeed simnani this marriage took place. Kulgam is an important place in south Kashmir. Kulgam connects, and its boundaries touch, all the three districts Shopian, Pulwama, and Anantnag of south Kashmir. The topography of Kulgam is scenic, and it is surrounded on all sides by small streams ‘orchards; paddy farms and a scenic Kerwaha with a big portion of plan area and fields.