Kishtwar the land of saffron, sapphire and shrines was an independent hilly state during the medieval period. Maharaja Gulab Singh, the Dogra ruler of Jammu annexed it in 1821 AD. District Kishtwar was carved out from the erstwhile District Doda during the year 2007-08  when the Chief Minister of state G.N.Azad had taken a historic decision in July 2006 for creation of the new district It has the unique distinction of being one of the biggest districts of the state in area just next to Leh and Kargil districts. Its area is almost one half of the total area of eleven districts of the valley and one third of the area of the Jammu region which too has eleven districts. Population of Kishtwar district is around 2.5lakh. History geography, topography, demography, area and population define the status of a place or region.  Kishtwar is almost mountainous like that of Himachal or Ladakh region. District Kishtwar has its boundaries touching the valleys of Himachal in the south east and Doda on South-West. The entire district is full of mountains, forest and hills. Hindus, Muslims and Sikhs all resides here with amity and brotherhood. The district has four Tehsils namely Marwah, Paddar, Chhatroo and Kishtwar with headquarters at Nauphachi, Atholi, Chhatroo and Kishtwar. An almost entire district receives snowfall during a good winter. Habitation is found even at altitude of 9,500ft. Kishtwar is full of hidden charm, wonderful sites and spots, health resorts, tourist’s locations famous historical and religious places, sacred shrines and monuments.

Kishtwar district situated amidst snow-capped mountains, emerald valleys, fruit orchards, whispering deodar and pine forests with their rich flora and fauna, gurgling streams meandering through lush green meadows, sprinkled with colorful natural wild flowers, create a grandeur that is hard to match. The valleys of Chhatroo, Dachhan, Marwah, Paddar and Warwan in particular have an enchanting and mesmerizing natural beauty which has a great potential for adventure, pilgrimage, eco, health, rural, cultural and film tourism. Unexplored and unexploited due to scarce road connectivity, these areas, having lush green forests, humming heights talking to the sky, green meadows and alpine pastures in the lap of high rising mountains where sight of neighing horses, bellowing cattle, bleating sheep and goats which have ascended from hot plains, display an absorbing view in summer months and remain under a white blanket of snow during the winter. The prominent Tourist circuits along with the main beauty spots, worthy of mention are the following: 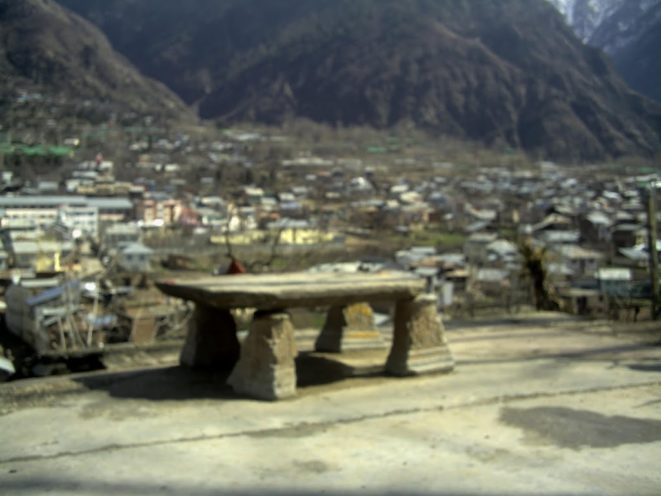 QILLA KISHTWAR: To the south west of Kishtwar town is a hillock where a fort and palace existed during the rule of the Raja’s of Kishtwar. There are said to be built by Raja Kahan Paul. With the passage of time, the house and the fort at Kishtwar became non-existent excepting the throne, made of stone, which stands there even today. The one piece seat of stone slab with a thickness of 15cms, stands on four stone pillars of greenish colour 42 cms high. As it is a heritage site, it needs be preserved, otherwise the slab too will get lost in due course of time. The two guns locally called ‘TOPE’ have been preserved and installed within the premises of the office of the Deputy Commissioner Kishtwar. From ‘Qilla’ site a panoramic view of Kishtwar town, NHPC colony and Mandal along with tall mountains surrounding the valley of Kishtwar can be seen. The ‘Kishtwar Development Authority’ proposes to develop this place by laying a park and fountains there and connecting it with a road. 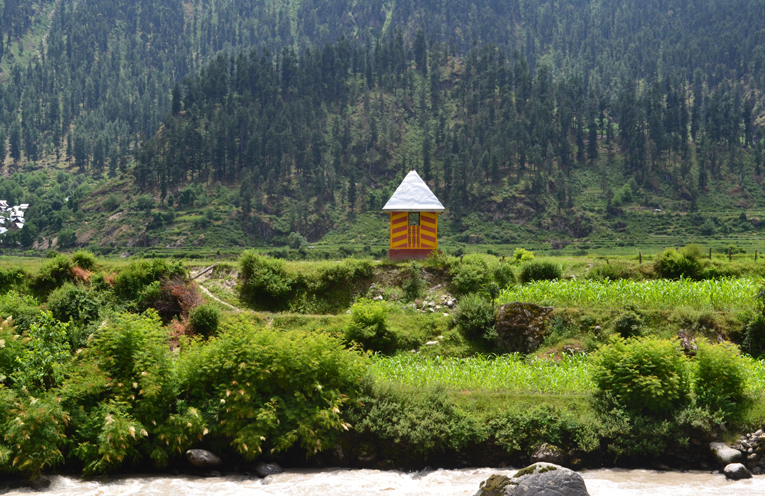 KATARSAMNA: The place at a distance of three kilometers from Kishtwar and connected with a road is another beauty-spot, wherefrom the view of Kishtwar town, Dul-Hasti Project Colony, and its beautiful surrondings, Nagin- Shiru peak to its North and roaring river Chenab to its South can be seen. The premises of the ‘Kartik’ Swami temple are situated at a prominent place. there is a vast ground in front of temple, a two room suite, a kitchen and a toilet for the convenience of the pilgrims. 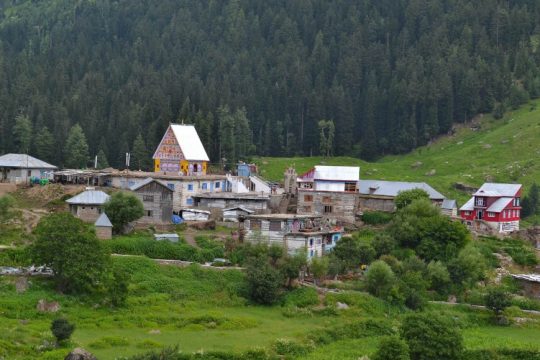 BHARNOIN: The picnic spot of Bharnoin, below Pochhal village, 3 kilometers away from Kishtwar town is known for its eye-captivating beauty. The place is situated in a forest area dense with conifers like deodar and kale trees. The place nearby busting Kishtwar town is cool, calm and pollution free. Down below the slopes of Bharnoin is the majestic view of roaring Chenab whose roar is heard here. Side by side is the beautiful forest patch of ‘Bindraban’. The whole area is, indeed, full of mesmerizing beauty. The Kishtwar Development authority has constructed a ‘Shelter Shed’ a toilet block, an eating point, viewing deck and some view points keeping in view the eco aspect of development. The place is full of hustle and bustle created by various picnic parties. After this place, the visitors feel themselves free of stress and strain and return relaxed. 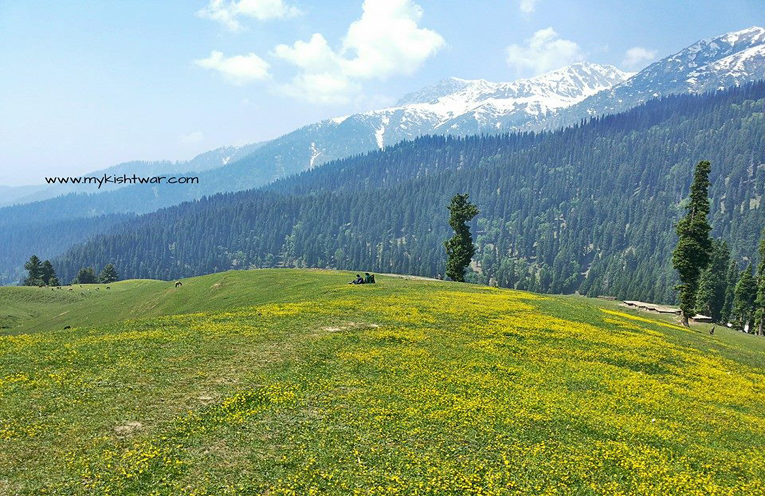 SAFFRON SAFARI: A place of attraction for the tourists are the saffron fields of Kishtwar located mainly in Pochhal, Hatta, Bera-Bhatta, Matta and Berwar villages nearby Kishtwar town. Saffron flowers are in full blossom in the months of October and November every year, so this time is the best for visit to Saffron Safari.  The view of purple colored Saffron flowers, spread like a blanket over the fields, early in the morning is, really, enthralling and mesmerizing. The fragrance scattered by this blossom in the atmosphere gives a heavenly touch the environment. Early in the morning women folk, men and children in their colorful attires go to the saffron fields for plucking flowers, preferably, before sun-rise otherwise its red carpel’s get separated from the petals after sun rise, causing inconvenience in handling these later on.

KISHTWAR-CHHATROO-SYNTHEN TOP- DAKSHUM-ANANTNAG CIRCUIT:  The circuit having matchless beauty is one of the most beautiful toursit circuits of the country. Recently, on 26th and 27th June 2010, a motor rally was organised by the “Himalayan Motor Sports” in which 33 racers, drawn from various states of the country, passed through this beautiful circuit. It traversed through Dakshum, Synthen, Mughal Maidan, Kishtwar, Udhampur, Mansar, Surinsar, Jammu, rajouri, Poonch, Mughal Road, Shopian and back to Srinagar. The motor rally has attracted the attention of the adventure tourists of this country and the world towards this beautiful region, hither to neglected. The government of Jammu and Kashmir has taken up the construction of road, with liberal central assistance, from Kishtwar to Dakshum via Synthen Top through GREF. The road is operational now. The government is also proposing to connect this circuit to Kathua, Bani, Bhaderwah, Doda circuit which will open an area of immense natural beauty, places of pilgrimage and adventure for the local as well as the foreign tourists. This road will also be the most comfortable road for the Yatries of baba Amar Nath Ji or reavhing the base camp at Pahalgam within shortest possible time. 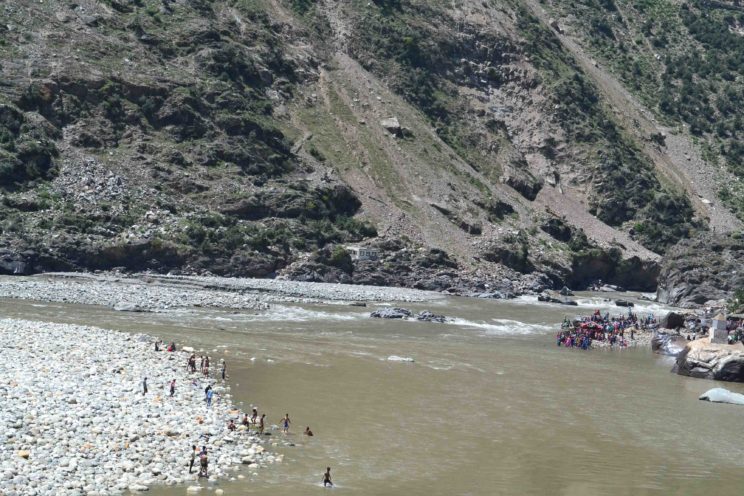 BHANDARKOOT: The place is situated at a distance of about 12 Kms from kishtwar town on Kishtwar-Synthen-Anantnag road. A big mela is held here on Baisakhi every year. After a dip in the ‘Sangam’, the visitors pay their obeisance to the two most revered religious places, the Astaan of ‘Shah Zain-ud-Din‘ on the left side of Chanderbhaga, an the ancient ‘Neelgangeshwar’ pond and the temples of other gods and goddesses on the right bank of the river. These two places of religious importance attract thousands of pilgrims not only on Baisakhi but for the whole year round. Cocks and Sheep are offered at the Astaan by both the main communities for taking the blessings of the great saint. Bhandarkoot, thus, is symbolic of complete mutual brotherhood and communal harmony. A small army cantonment at the place has added to the hustle and bustle of the place. The scenery around Bhandarkoot is quite charming. This is an ideal place for rock climbing.

MUGHAL MAIDAN: Eight kilometers ahead of Bhandaroot comes Mughal-Maidan a scenic spot on the bank of Chatroo river. The market place and some govt. buildings and add to the beauty of this place. The place is being developed as tourist spot. Chatroo River is known for rearing ‘Trout’ fish. Therefore the fisheries Department of Jammu and Kashmir had established a ‘Fish-Hatchery’ here and constructed some buildings, Fish trade, if promoted, will raise the economic standard of the people. 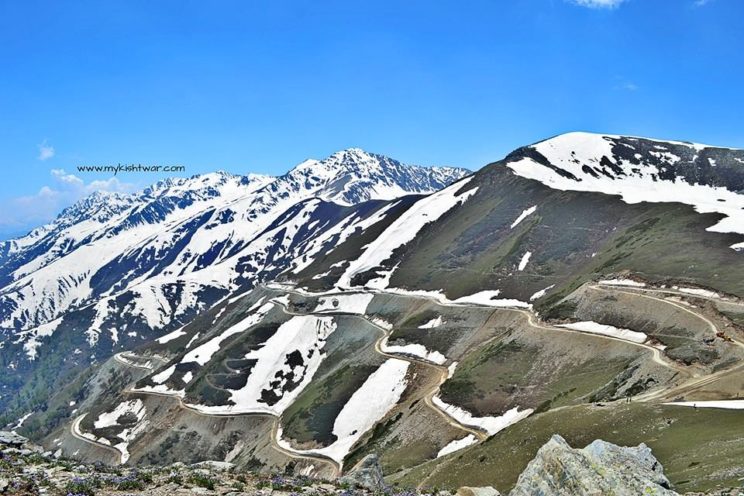 SINTHAN TOP: From chingam onwards, we find an ascending road amidst Zigzag road and forest cover; we reach Synthen Maidan, 60 kilometers away from Kishtwar. The alpine pastures of this place have matchless natural beauty. The cool and salubrious climate of the place has a refreshing effect on the tourists. Here we find unending slopes and plain meadows on the foot of the Synthen-top. The place is ideal for games like Para-gliding, horse riding, rock climbing and winter games like skiing, skating, ice –hockey etc. 24 kilometers ahead of Sinthan Maidan is the Sinthan Top at an altitude of 3784 meters from sea level. On reaching the top, one feels at the top of the world, quite light and detached from the worldly worries. View of the surrounding area is very charming. A potato farm established here by the Agriculture Department yields a good potato-crop which is superior in quality and tasty to eat. From Sinthan top, the descending road leads to Daksum, a health resort of Anantnag district in the Kashmir valley.

DOOL DAM: 22kms ahead of Kishtwar town is a water body at Dool, the site of the Dool-Dam of the famous Dul Hasti Hydroelectric Project of 390MW capacity. The NHPC has constructed a good road up to the Dam site. The water body formed due to the construction of 65 meters high dam on Chenab is being developed for water sports as the surroundings area of the reservoir has a huge potential to attract tourists. Dool dam is one of the four water bodies of Jammu region namely Mansar, saruinsar, bagilar dam and Dool dam for which experts of the Goa based ‘national Institute of Water Sports’ have recommended boating and water sports. Use of motor boats and Shikaras with specific horse power and seating capacity has been recommended for this water body. The department of the tourism has decided to encourage private participation in starting these activities here. The department will provide license for operation of boats, make rescue boats available, take safety measure, set up launching pads, jetties, view points and all other basic infrastructure but for the purchase of boats and Shikaras private participation will be encouraged and provided proper training and guidance. At present the KDA has completed the following works at site:- A guest House

PADYARNA: At a distance of about 30 Kms from kishtwar town by bus we reach Padyarna village, the block headquarter of Nagseni block where from historical sites of Nagseni block can be visited. 8 to 20 Kms above Padyarna are some villages where ruins of stone- temples, broken idols and stone inscriptions have been found. Padyarna, a picturesque spot on the right bank of Chenab. Qomiye Naag is also a place where you must visit.