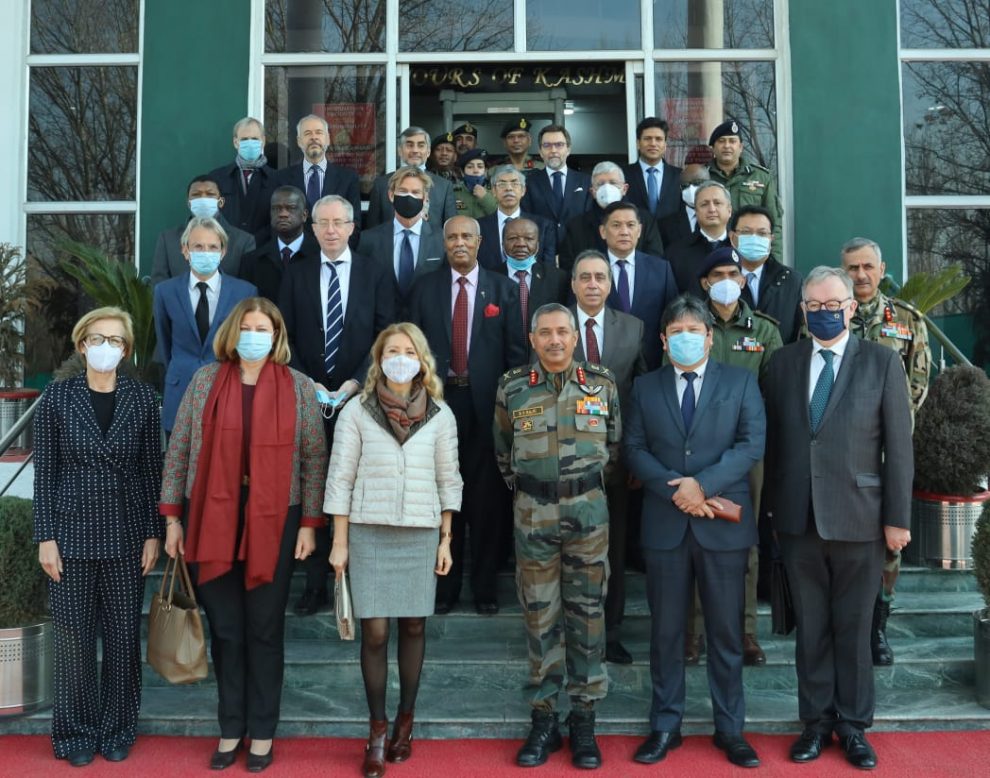 A statement issued by the army to the news agency— said that a delegation of the foreign envoys visited army’s 15 Corps in Badami Bagh headquarters where they interacted with GoC 15 Corps Lieutenant General B S Raju and other senior officers including Inspector General of Police (IGP) Vijay Kumar. The envoys were briefed by the police and army representatives on the ground situation at the line of control and in the hinterland, the statement said.

It further said that the police briefing included an update on the efforts on ‘mainstreaming the youth’ and ‘policing under COVID 19 challenges’. “This was followed by an Army briefing which included a brief historical update and the current situation in J&K,” the statement added.

It further said that the event concluded with a question answer session wherein the envoys asked questions to the 15 Corps Commander. “In response to the queries the Corps Commander elucidate the multi-pronged and integrated approach of the army and police,” the statement said.

Asked about the status of various militant organisations, the Corps Commander shared that overall the security indicators have improved however the militants still retain the ability for a militancy act. “Last year most militant organizations have experienced depletion in their strength and killing of the outfit leaders which has resulted in a more secure environment. He (GoC) further explained that despite the militants’ estimates reducing to nearly 200, the edifice of Counter militancy operations still requires a grid deployment to ensure security to the citizens residing in the UT,” the statement quouted GoC Raju, as having told the visiting delegation, adding that “International experiences including in Afghanistan prove the need for boots on ground in Counter militancy operations.”

The GoC as per the statement, shared that while grassroot politics is taking root, the militant organisations’ effort to target political workers is a worry. “It is a clear message that Pakistan sponsored elements do not want a change to status quo. Any activity that leads to normalization of the situation is opposed,” the statement said. “The Corps Commander also drew attention to the propaganda efforts of Pakistan and the separatists. H shared that Kashmiri citizens have seen through the lies of the cross-border propaganda and are choosing to ignore it.”

About de-radicalisation efforts, the Corps Commander shared that the principal supporters in such efforts are the parents, society elders and friends who help in identification of youth vulnerable to radical ideology, the statement said. “A joint civil society and government effort are made to counsel and support such an identified youth. The visiting envoys expressed satisfaction at the soft policing being attempted in J&K,” the statement added. About the role of NGOs in supporting the government efforts, the Corps Commander shared that many local and national NGOs are helping in government effort in J&K, these are in diverse fields including drug abuse, women empowerment and skilling of the youth. “The national NGOs bring in skills, technology and help in building cross-regional linkages, which would prove invaluable in the long term,” the statement said.