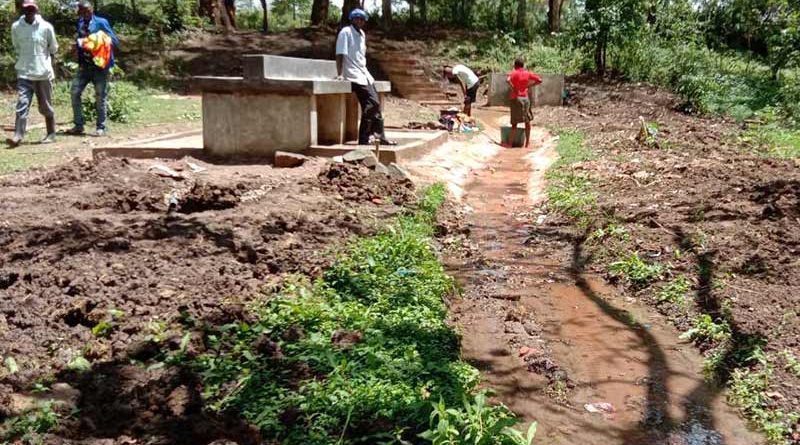 BOMET: Monica Kirui, 30, a mother of five from Kipsegon, remembers queueing for hours as she waited to fetch water from the local springs, the only source of fresh drinking water in her village in the southern part of Kenya’s Rift Valley.

One of the few springs in the area that has water year round, Kipsegon attracts people from all over. In the past, some would wait overnight to get their water, often contaminated by so many people dipping containers into the springs, Kirui said.

But that has not been a problem since April, when a concrete barrier was built around the springs to help keep the water clean and guide it through pipes ending in four taps, allowing villagers to collect their water quickly and safely.

“I’m happy because I no longer worry about how I will get water, nor spend the whole day looking for water. I have time to concentrate on my other house chores,” Kirui said.

Across Bomet County, springs like Kipsegon are being protected and rehabilitated under a government project that aims to increase access to drinking water sources and boost biodiversity, said Fredrick Ruto, the county’s assistant director for water and irrigation.

In some cases, people have been trekking up to 5 km (3 miles) to get water from rivers, he noted.

“The main objective of our programme is to ensure everyone gets safe, clean drinking water for both domestic and livestock use,” he added.

It involves erecting walls or fencing to prevent people from contaminating the springs, marking the exact points where water flows out of aquifers and building supply systems to help villagers tap into the resource more easily.

So far, the initiative has made improvements to more than 60 out of at least 100 mapped springs – each providing drinking water for up to 1,500 people – and has built about 130 ponds to catch rainwater in dry areas, according to Ruto.

The programme has proven so successful that the local government has more than doubled its funding this financial year to 11 million Kenyan shillings ($100,600), he noted.

“For the springs that we have (improved), we have witnessed an increase of water,” he said, without providing figures.

Bomet is one of four counties that make up Kenya’s share of the Mara River basin, where Ruto said there had been persistent shortages of fresh drinking water for the past two decades.

The majority of the county’s population of about 876,000, especially in southern areas, struggle to find water in dry seasons, which can last up to three months at a time, he noted.

According to the 2019 U.N. World Water Development Report, less than a quarter of the population of sub-Saharan Africa has access to safe drinking water.

“These disturbance factors – such as soil erosion, farming and the use of fertilisers – reduce water flows, (as well as) water levels in reservoirs fed by seasonal rivers and inland groundwater levels in the entire region,” he said.

Besides providing communities with fresh water, springs and wetlands are hotspots of biodiversity, hosting about 30% of the species in the Mara River basin, said Taita Terer, head of the Centre for Biodiversity at the National Museums of Kenya.

“Springs form rivers and these rivers are the hallmark of wildlife survival in the Mara-Serengeti (region). So, if springs are unprotected, reduced or there is no water in these rivers, we will not have animals in the Mara in the next generation.”

Terer said deforestation is a major cause of biodiversity and spring loss in the region, because trees are key in hydrological cycles.

When rain falls, the holes made by tree roots help the rainwater sink into the soil, refilling the aquifers that feed springs and wells. In treeless areas, most of the water runs off instead, the water table is not replenished and sources run dry.

Trees also help cool the local environment and minimise the amount of water that evaporates from springs and aquifers in dry periods.

As part of Bomet’s programme, villagers are being encouraged to plant indigenous trees around riparian areas, said Paul Rono, chairman of the Nyongores WRUA, a community-based group mandated by the government to manage local water resources.

To help with the effort, his group is providing villagers with indigenous seedlings purchased by the government.

To stop farmers and others encroaching on the land being conserved under the programme, all reforested areas are mapped and fenced off, Rono explained.

Initially, villagers were resistant to the move, concerned about being cut off from areas that carry historical and cultural significance as sources of herbal medicines, he said.

But after learning about the importance of protecting the springs, they came around.

Now each spring is assigned a committee of 15 community members tasked with managing and maintaining it, he said.

Maize and cattle farmer Joseph Kirui is one of them. He oversees repairs to the fences around the Kipsegon springs, does routine checks every several days for pipe damage or blockages, and stops anyone he catches trying to harvest the trees.

He thinks the county government should consider paying villagers to motivate them to look after the springs far into the future.

But, for now, they are happy to do the work for free.

“The improved and productive springs have given the community a sense of ownership,” Kirui said.

“The more water community members take from the springs, the more they voluntarily become the springs’ caretakers.”

Trans teen takes legal action over gender care delay in UK
‘No democracy without women’: Priced out of politics in El Salvador
Comment