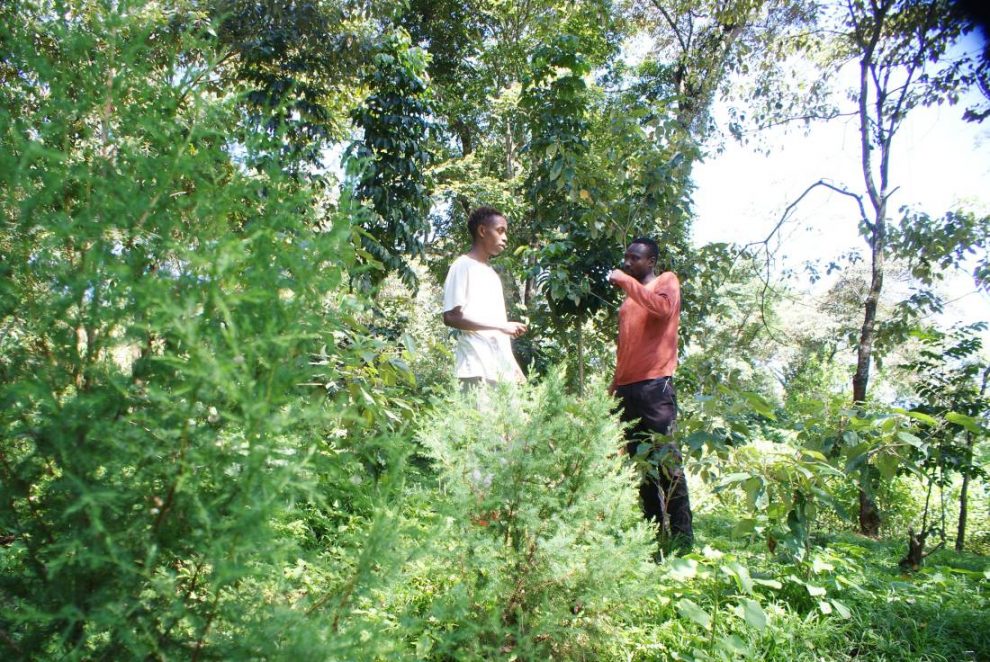 KARINDE, Kenya: Peter Wainana remembers when the forest near his home outside Kenya’s capital, Nairobi, was so thick with trees and vegetation it was difficult to walk through.

Today, Thogoto forest, on Nairobi’s northwest edge, is dotted with open spaces that locals and environmentalists say have been illegally cleared of trees by loggers and property developers, Wainana said.

The destruction motivated the 49-year-old to join with a dozen other farmers from Karinde village to protect Thogoto’s trees through projects such as bamboo farming and beekeeping.

“Everybody wants a piece of this forest because it is near the capital city. Rich people are trying to steal its land, traders are taking (its) timber, even manufacturing companies are dumping toxic waste here,” said the father of three.

Across Nairobi, community groups are working to stop encroachers from destroying the forests around the city, as conservationists allege that much of the activity is due to illegal deals between developers and local politicians.

Asked about the corruption allegations at a media briefing in November, Alfred Gichu, national coordinator for REDD+, the U.N.-backed conservation scheme, acknowledged that unlawful encroachment was rife in the country’s forests.

“City forests are always on the radar of land grabbers because of the value they hold. Fighting them politically does not work, so we have to come up with creative ways of engaging communities (to help) keep them away,” she said.

Like other members of the local conservation group he belongs to, Wainana farms in Thogoto forest under a state programme aimed at tackling deforestation, the Plantation Establishment and Livelihood Improvement Scheme.

Run by the Kenya Forest Service (KFS), the initiative allocates farmers half an acre of land each – cleared by the KFS – in any Kenyan forest to grow crops like maize and beans for a period of up to four years.

In return, the farmers must plant and nurture trees until the saplings are mature enough to sustain themselves, explained Patrick Kariuki, a conservator of forests for the KFS.

Working in partnership with the MCDI, Wainana and the rest of the Thogoto Community Forest Association have gone beyond the scheme’s remit by also planting bamboo to fill out the forest.

In addition, the plants’ roots stop silt falling into the springs that flow through the area, which was causing their water levels to drop, Wainana explained.

To deter encroachers, older women in the group have turned to beekeeping among the trees, he added.

They sell the honey to supplement their incomes, and because the bees need daily attention, the project ensures there is always someone in the forest to report illegal logging.

“I feel happy about this project because it is restoring the spring water in the forest, which was drying up due to deforestation. (And) it has boosted our food security, with the crops that we grow there,” Wainana said.

Scientists say protecting forests is one of the cheapest and most effective ways to curb climate change because trees suck carbon dioxide, the main gas heating up the planet, from the atmosphere.

According to the Ministry of Environment and Forestry, Kenya loses about 12,000 hectares (29,650 acres) of forest each year due to a combination of rising demand for wood fuel and charcoal, a growing population, the spread of infrastructure and the conversion of forest into farmland.

Over the past three decades, the amount of land covered with closed canopy forests in Kenya has plummeted from 12% to below 2%, according to Chris Kiptoo, principal secretary of forestry.

Firewood harvesting, one of the major causes of deforestation around Nairobi, is mainly done by young locals who sell the wood to traders, noted Jared Babu, executive director at Sisi Kwa Sisi, a community-based conservation group.

“Some of the youth here (who are) addicted to drugs and alcohol have no regular source of income. They sneak into the forest to collect firewood, which they trade for their daily doses,” said Babu, whose group’s name means “together as one”.

The Karinde Youth Group, another organisation working with the MCDI, harnesses the energy of the city’s young people for eco-tourism instead, said Mbugua Kamau, the group’s chairman.

Group members act as tour guides, charging each visiting party 1,500 Kenyan shillings ($14) for the chance to hike through Thogoto forest and go on retreats.

One of the tour guides, Paul Njoroge, 21, said they check every vehicle that goes in and out of the forest and report incidents of encroachment, logging and waste dumping to forest authorities.

Njoroge also helps with tree planting and says that, since the group started in 2018, many of the once-denuded forest areas are now filled with trees.

In the past year, group members have seen no new deforested areas, he added, sitting under swaying trees outside a primary school on the eastern edge of Thogoto forest, where they meet.

For Njoroge, helping look after the forest is both about protecting his community and saving his future, as he is pursuing a career in tourism and conservation management.

“This work has kept me from idleness and being involved in drug abuse. If this forest is destroyed, it means I will not have a job in the next few years,” he said.