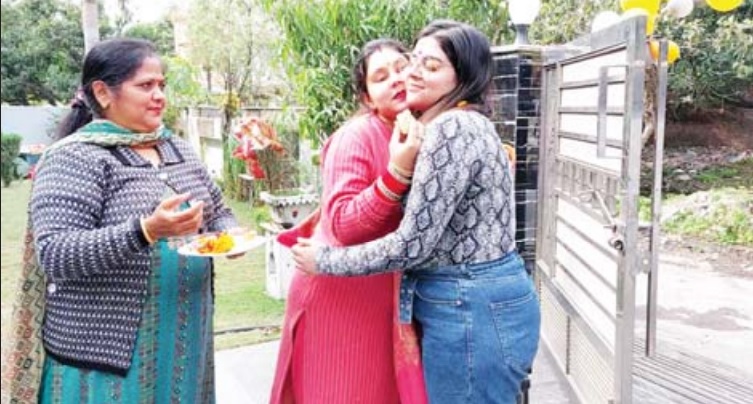 The Dispatch Staff
Add Comment
A relaxed Muskan, said that her joy knew no bounds that she re-united with her family members safely. Muskan a fifth course of MBBS student in Ukraine said that she joined the degree there in 2017 and the Indian students were not apprehensive of the war taking place.

Kathua: The joy of Kathua girl doing MBBS in Ukraine and her family members knew no bounds after she reached safely to her home today.

The family members of the girl were all anxious about the safety of their daughter Muskan Mahajan especially since yesterday after the Russia attacked the Ukraine.

Muskan, who reached her home today seemed totally relaxed after returning from a country where people are facing total uncertainty due to hostilities with Russia.

A relaxed Muskan, said that her joy knew no bounds that she re-united with her family members safely. Muskan a fifth course of MBBS student in Ukraine said that she joined the degree there in 2017 and the Indian students were not apprehensive of the war taking place.

She said that there were media reports in India that war clouds are hovering over the skies of Ukraine as Russia has turned hostile towards Ukraine. She said that the Ukraine media termed these reports as media war saying that there is nothing like a war taking place between Russia and Ukraine.

She said the media reported that Russia has been threatening Ukraine for a long time and such threats were earlier also but war did not broke out between two countries.

Muskan said “It was only on February 16 when US stated that Russia will do some adverse and most probably it will attack Ukraine we came to know that situation may deteriorate in Ukraine,

However the Indian Embassy issued advisory to students asking them to remain confined to their hostels only ”.

She said Indian Embassy issued later in another advisory to Indian students asked them that they can leave the country as war like situation is emerging. Under these circumstances some students got air ticket while others booked chartered flight.

But when Indian Special plane came to lift students it could not land as war has started. Muskan said that she was lucky that she has reunited with her family members as her mother was worried due situation arising in Ukraine and news reports pouring across the world in this regard.

Muskan said she is also wor[1]ried for her colleagues studying in Ukraine and wanted their safe return. She said three students of Kathua studying in Ukraine. Her mother, while feeling relaxed after her daughter reached home safely has asked the Government to take steps in repatriation of other J&K and Indian students studying there.

Meanwhile, the family members of Anirudh Chowhan a stu[1]dent from Kathua studying in Ukraine are worried about the safety of their son after Russian attacked that country.

Anirudh’s father Rajan Chowhan and mother Mamta Chowhan of WNo.13 Kathua are in tension and making regular video calls to their son studying in fourth year of MBBS in city Kharkiv of Ukraine. In the live video Anirudh told his parents that the situation in Ukraine is not so good and regu[1]lar bombing , missile attacks , ,blast are taking place there. He said that they have taken shelter in a Metro rail tunnel. They have not sufficient food to survive and there is shortage of foods and drinking water.

The parents of Anirudh are passing sleepless night after the war started in Ukraine. Following the tension in Ukraine, Anirudh booked a tick[1]et at highest price but when he boarded a bus to Airport , a mis[1]sile landed just few meters away on the way and bus returned o hostel. He and his colleagues took shelter in a bunker . The Russia has continued the attack . The family is very worried of safe return of their son and appealed the both countries Ukraine and Russia to declare ceasefire till evacuation of civilian trapped there.

The family also appealed to PM Modi to make all possible steps for safe returns of their children. The mother of Anirudh while shedding tears prayed to Mata Vaishno Devi for safe return of all students of J&K stuck in Ukraine.