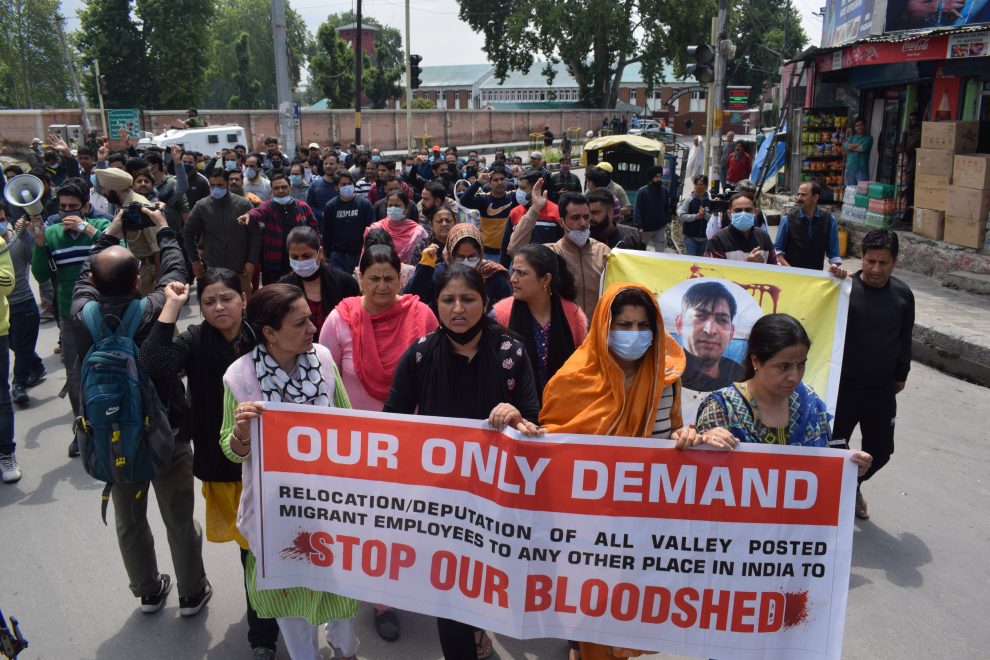 SRINAGAR: Kashmiri Pandit employees continued their strike on the 13th straight day on Tuesday, despite an assurance from Jammu and Kashmir Lieutenant Governor Manoj Sinha on Monday that their security and job concerns would be addressed.
The employees have been on a strike since the killing of Rahul Bhat, a clerk appointment under the special Prime Minister’s package on May 12 inside a magistrate’s office in Budgam.
Sinha and senior officers on Monday evening visited Sheikhpora transit camp housing the pandits and assured them their security would be enhanced. He said employees would be deployed three kilometres within the district and tehsil headquarters and adequate protection would be given.
Sinha said security forces were on top of the situation, but Kashmir is a place where even shadows are suspects. He told them militancy would be uprooted along with the “strong” terror eco-system that provided oxygen to it.
While Sinha said his doors are open for dialogue, Kashmir’s Divisional Commissioner P K Pole delivered a straight message asking pandits to resume work from Tuesday. Pole told the gathering that police and civil officials have worked hard to improve security and it was time to come back to offices.
“I request you to join duties from tomorrow. Police in particular have eliminated those targetting many civilians and they will continue to do so,” he said.
“What security are they talking about? Wasn’t Rahul killed in a secured office? Enough is enough, why are we being made scapegoats,” a KP employee asked news channel at a protest site near Badamibagh cantonment.
All these days, the pandits have staged protests in almost all districts, tonsuring their heads and immersing petals in Jehlum in remembrance of slain Bhat.
“We will not give up on our demand to relocate us outside Jammu, besides revoking the unconstitutional bond that binds the KP employees to serve in the Valley,” said Ashwani Pandita, a KP leader who has been a face of the current agitation.
Pandita told Sinha they will continue to hold peaceful protests till the government finds solution.
“Only solution is relocation. Kashmiri Pandit Bali ka Bakra Nahi Banega,” shouted protesters on Tuesday at Sheikhpora even as police maintained a close vigil.
Earlier, the pandits had suggested that the job given to Bhat’s wife, despite her being a graduate, was “below her competence”. “Should our sister make tea in office for her colleagues? Isn’t it adding salt to the wounds of the family,” the leaders had said on the initial days of protest.
The LG assured the employees that Bhat’s wife would be given a job commensurate to her educational qualification. He also hinted the government may enhance the compensation for Bhat’s family.